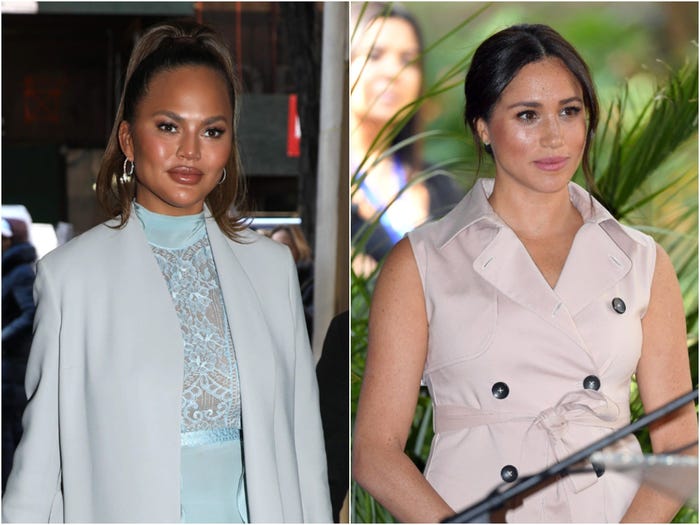 Chrissy Teigen defended the Duchess of Sussex against a Twitter user who appeared to criticize her for opening up about a miscarriage.

Meghan Markle's op-ed in the New York Times, titled "The Losses We Share," details the miscarriage she suffered during her second pregnancy in July this year. The duchess described the experience as an "almost unbearable grief," and people from around the world who have experienced pregnancy loss praised her for speaking so candidly about the subject.

Some people on social media have also criticized Markle for writing about her miscarriage, with journalist Marco Giannangeli saying it might be perceived as a "1,000 word op-ed about herself."

"Is anyone really questioning the pain and sheer awfulness of suffering a miscarriage, or are they perhaps criticizing Meghan's decision to write a 1,000 word op-ed about herself? What does it add to the resources already available for those who go through a tragedy like this?" Giannangeli, the Defense and Diplomatic editor at the Sunday Express, wrote on Twitter.

She retweeted Giannangeli'ss tweet and wrote: "Award for today's absolute piece of s— goes to Marco Giannangeli. Congratulations, piece of s—," according to E! Online and the Mail Online.

Teigen then tweeted: "Sorry forgot I'm trying to be nicer lol," which may have been a reference to the deleted tweet.

Giannangeli told Insider that his tweet was meant to explain where the controversy surrounding Markle's announcement was coming from.

"No-one is questioning how awful miscarriage is. I was trying to say that those who are criticizing are criticizing the method of delivery. If she had been asked about it in an interview and answered, I don't think it would have caused the same controversy. That tweet was my take on where the controversy was coming from," Giannangeli told Insider. "And now suddenly it's been made out that I'm misogynistic and hate women."

He added: "I should point out that my account is private and not blue ticked, so I was writing as a private citizen. I received 899 replies and 530 likes. So not everyone, but a lot of people got what I was trying to say."

Teigen suffered her own pregnancy loss in October after being hospitalized for extreme bleeding.

The TV star shared a photo of herself in a hospital bed on October 1, alongside a caption which read in part: "We are shocked and in the kind of deep pain you only hear about, the kind of pain we've never felt before. We were never able to stop the bleeding and give our baby the fluids he needed, despite bags and bags of blood transfusions. It just wasn't enough."

Representatives for the Duchess of Sussex declined to comment when contacted by Insider about the duchess' op-ed.

Ellen Pompeo to Produce Adaptation of 'Paradise' Trilogy at ABC