Parents of school-age children will probably be familiar with “Pyjama Day,” a strange, boundary-blurring ritual, usually a fundraiser, where kids are encouraged to turn up to school in sleepwear. Now, in what Victoria’s bureaucracy touts as “remote and flexible learning,” every day is pyjama day. The morning rush in lockdown entails my 12 year-old dragging herself from the dining room to darkened unmade bedroom, laptop flipped open just in the nick of time. By the end of the day she’s often too exhausted to get outdoors, and I lose the will to force her out.

COVID has ravaged our old, yes. It is also eating our children and our young adults— the nation’s future tax base, the people we’ll rely on to support us in old age. And the time has come to put them first. 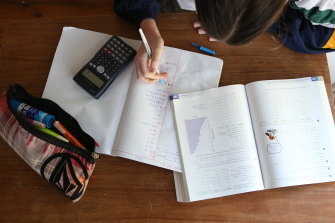 COVID is affecting many people but it is time to put young people first.Credit:Louise Kennerley

During last year’s nearly four-month long lockdown my daughter’s teacher confided in me his shock at the physical impact on students’ health. “All of a sudden I was seeing all these double chins on Zoom,” he said.

When it comes to lockdown’s impact on children’s mental health, the schools are churning out online “resilience” programs in which kids pick out illustrated cards that best describe their emotional state. But I don’t need cards, or research statistics, to tell me the children are listless, lonely and anxious.

As for actual learning, privileged families like mine can relegate the issue to one of secondary importance. Other children, many of them “disadvantaged,” are still trying to catch up, with the help of state-funded online tutoring, on missed academic progress from last year’s lockdowns. A good many of them will fall even further behind now.

Let’s be clear I’m giving no succour to the opposition, by which I mean the federal government. When the prime minister declared on Monday that “kids have lost enough time out of school over the last 18 months,” it was less a statement of fact than a needling of the Andrews Government by a leader who assumes he’ll be politically immune should a hasty end to lockdown worsen the outbreak. 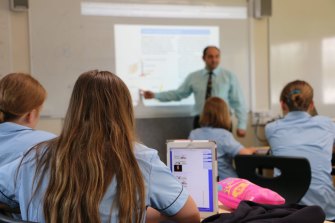 Schools need to be made COVID-safe to minimise the risk of future closures.Credit:Jamieson Murphy

I’m not even criticising the closing of schools on this occasion: I’ll leave that to experts such as the senior researchers at the Murdoch Children’s Research Centre who say we need a more targeted strategy because the costs of blanket school closures during outbreaks outweigh the epidemiological benefits.

What I am criticising is the lack of urgency in making schools COVID-safe to minimise the risk of future closures.

So while Gladys Berejiklian whines about NSW deserving a bigger share of vaccines to match its bigger population, the Andrews government should be announcing a plan to vaccinate all Victorian teachers as quickly as possible and start heavying the Feds, if necessary, to help make it happen.

I was cheered, at least, when Years 11 and 12 were allowed to return to school last week. My older daughter, who is in VCE, was euphoric when she heard the news. I found myself wanting to freeze the moment. Because during these restless lockdown nights I lie awake wondering what next year might look like for her.

In some of the country’s most prestigious universities large numbers of students have barely seen the inside of a lecture theatre in 18 months. As the Age reported in April, even after the easing of state coronavirus restrictions on gatherings, many courses at Melbourne universities, and even some in Sydney, were being taught exclusively or partly online. After a fierce student backlash, the universities said they would resume face-to-face tuition for most courses in second semester— the latest outbreak obviously puts that in jeopardy. 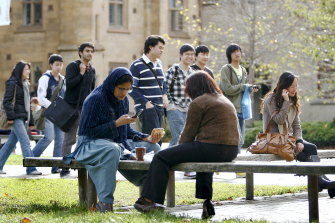 COVID has meant that many young people are missing out on experiencing campus life.Credit:Eddie Jim

But the problem goes deeper than COVID. The universities aren’t merely acting out of an abundance of COVID caution, but because of a sick bottom line caused by the sector’s unique exposure to the now-collapsed overseas student market. So while Melbourne University briefed staff on its plans to achieve potential savings via “opportunities for blended face-to-face and online curriculum,” to students it was spruiking its “virtual campus” as the way to be “more connected than ever”. Hard to believe the bluestone institution is prepared to put its name to such cynical spin.

Hard to believe so many young people are missing out on the irreplaceable experience of campus life; the spine-tingling sensation of being in a packed and rapt lecture hall, of spilling into the pub afterwards, of arguing politics over endless cups of coffee, of rallies on the green, and yes I know my imagination is stuck in the 1970s, but still.

(It all leads me to think that if we must have a Federal Government with a vendetta against the higher education sector it could at least start strong-arming universities into being actual universities).

Nor can young adults go backpacking overseas until things get better— it’s like a glass screen stands between them and the life they should be living. They can see their alternate reality; they just can’t be part of it.

The other day the 12 year-old, who is in Year 7, cheerfully stated that lockdown is easier this time around because “I don’t expect things to be normal anymore.” Yes, kids are resilient. But rather than harping on about their resilience let’s try to stop letting them down.

Julie Szego is a regular columnist.