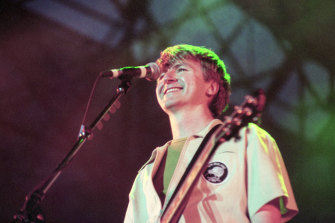 Neil Finn on stage in the short-sleeved shirt he had bought in Oxford Street that morning.Credit:Emma Brasier

“It’s burnt into my memory visually, because Sydney provided this incredible stage,” Neil Finn remembers of that night 25 years ago. “Not just the one we were standing on but the whole city, as it does. You know, we really had no idea what to expect beforehand …”

On the ground, expectations were high enough to draw an estimated 150,000 to the Sydney Opera House forecourt on Sunday, November 24, 1996, for what would become one of the truly great moments in Australian rock history.

For Neil Finn, Nick Seymour, Mark Hart and Paul Hester – returning to the drum stool after an unhappy departure two years earlier – it was the last page in a world-conquering story.

Here’s how the two remaining initial members of Crowded House recall it unfolding.

Neil Finn: I was nervous when [manager] Grant Thomas pitched us the idea of the Sydney Opera House. I thought it was too grand a statement. “Oh, let’s play in someone’s lounge room,” might have been my response. I was perverse, really. But he was right, and it was a great thing to do.

Nick Seymour: My main memory is just getting my outfit together, which is pretty typical of me. You know, you have expectations not only of yourself, but the way you’re being viewed. “Will I wear the orange corduroys? I will not wear the Birkenstocks!” Looking back at that time, I think I was probably more consumed by being a pop star. I was living the dream, in a way.

Finn: Funnily enough, I was thinking about what I was going to wear too. Unusually, for me. I had been out that morning to Oxford Street – left it till the last minute, obviously – and bought a short-sleeved top with a kind of green jumper underneath. It’s the only time I remember wearing a short-sleeved shirt, so I don’t know if that means anything. It was probably the only time I ever bought my own outfit for the stage. Nick used to take care of it most of the time. Nick’s thing to do, just before we walked out onstage, was to say: “What, you’re going to wear that, are you?” But he didn’t. He spared me.

Seymour: I was very aware of the irony in the moment, in that all I wanted to be was in a band, and this was our breakup: probably our biggest show ever, in Australia. There were so many ironies afoot that I think I was just dealing with the artifice of the moment … and [focusing], as [actor] Alec Guinness said, on remembering your lines and not bumping into the furniture.

Finn: There was a lot going on backstage. You get into a bit of a zone before a big event like that when there’s a lot of people; all those other bands playing [Custard, You Am I and Powderfinger opened the show]. Already the crowd had exceeded anybody’s expectations and people were going “Oh, my God …” There were clearly some crowd control issues … but it felt like a really nice vibe. It didn’t feel dangerous. 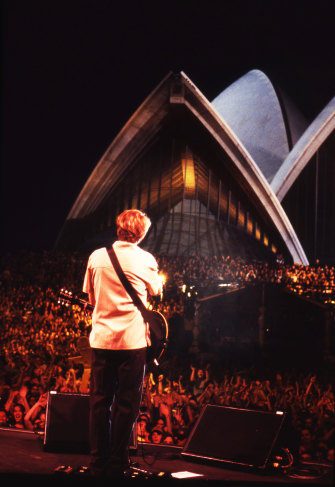 Seymour:Paul really, really wanted to do this gig; really needed to play a final show with us. He’d had enough time after he’d left the band, by the back door on a US tour, that I think he wanted some resolution. I was still very angry at the fact that he’d left the band. Neil had moved to New Zealand. We were all over the place. But backstage, we were so determined to be as good as we could be to the chemistry that we had, the natural essence of ourselves, and to what we’d shared.

Finn: It was a closure for Paul. He had left in very strange circumstances really, standing on the side of the road, watching the two of us drive off after our last gig in Atlanta [in April 1994]. It was a haunting image for him, and for me too.

We’d been together for the days before in Sydney. We’d been hanging out, and it’d been good. It hadn’t been weird. I remember going over to his room and sharing a joint with him and I had one puff, and it absolutely destroyed me. I had to walk around for about an hour or so. But apart from that, everything was rosy. 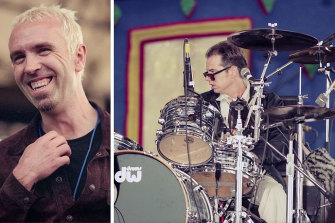 Nick Seymour and Paul Hester (on drums) at soundcheck the daybefore the epic concert.Credit:Jon Reid

Seymour: We realised how lucky we were to have found each other, from such different walks of life. I think we were quite philosophical about making sure there were no silly trifles that would, you know, shoot ourselves in the foot for this gig.

Finn: I don’t remember the specifics of when I wrote [the setlist] but it did seem like I put in all the songs that were obvious that we had to do, and maybe a couple that we really enjoy playing that we could have left off. It was great to have Tim [Finn] there, to do the ones that he was intimately involved with. So it felt like we really gave the full history its due.

Seymour: We were playing out of our skins on that show. When I watch it now, I think of how far in front of the beat Paul and I were, to just get the energy across; to play a rock show like Australians are used to. I’ve lived in Ireland 20 years and people hear a tin whistle and a violin playing a reel and they can sit inside that rhythm, whereas Australians have got to hear bass, drums and electric guitar with this kind of energy that’s just extraordinary. It’s quite unique. They rock a lot harder in Australia than anywhere else in the world, I reckon.

Finn: My family were all there [sons Liam and Elroy, now members of Crowded House, were 15 and 9]. At some point I remember seeing them going out and that was one of the most memorable images of the day for me: they had to be led out the front in a sort of phalanx of security guys forming a human V.

You can’t fully immerse yourself in the emotion of an event like that lest you lose concentration. I was just really determined to play well, to get the feels right, to represent the band as well as it possibly could in that environment. And I sort of figured the rest would take care of itself. 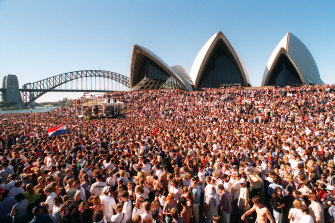 Seymour: I found it really hard to sing the [backing vocals] in Don’t Dream It’s Over. There were a couple of songs that triggered moments for me, that always did with Crowded House, because I personally thought they were the most perfect, beautiful statements of our chemistry that we could make. Don’t Dream It’s Over still does make me tear up if I don’t focus. It has a melodic rise and fall that triggers something deep inside. It’s almost like singing at a funeral: you have to really go deep. Four Seasons in One Day was similar.

Finn: There’s a whole raft of different feelings about the show, but the main thing is we came off feeling, at the end of the night, that we really played well. That, to me, was the absolute bottom line. It would have been so awful to go on stage for such an occasion and have a difficult night or disappear into some of the dilemmas that you can sometimes end up in. But we didn’t. We had really good communication, we were looking at each other all night, and we played really well. 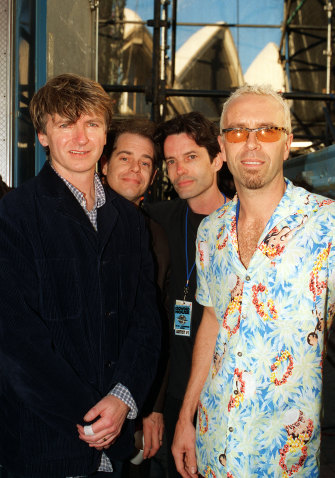 I’m really glad we didn’t do a big mop-up farewell tour to grab the cash. It just felt more authentic and more real. And we were playing for the children of Sydney Children’s Hospital [promoter Michael Chugg announced during the show that $250,000 had been raised]. All of these things made it feel like we stepped on stage with a good sense of purpose and unity.

We wanted to put a final statement out that was worthy of the occasion. We certainly laid it out there that this was going to be it. A lot of things contributed to the decision. Most acutely, probably, losing Paul. We almost felt like we had to perform a ritual. [Sadly, Hester would take his own life in 2005.] We were all fixated on getting it right. As Chuggie would have said, “Don’t f— this up boys!”

Seymour: A huge plus for me was the fact that it was in Sydney. I mean, we formed in Melbourne and we were such a Melbourne-centric band. I always thought Sydney was such a far-off destination. I remember walking up the street the following day. I was staying at the Sebel Townhouse, which was sort of rock’n’roll central in those days. I’m walking up the street just thinking, “Wow, we’ve cracked Sydney”.

Finn: We actually had an invader in the dressing room after the show. He was in there when we got back, just the four of us, having just done this momentous thing and there’s a guy in our room and we were like, “Who are you?” I can’t remember his name but it was Malcolm or Murray or something and he said, “Aw, I just climbed over the back wall mate”. I said, “Oh, security didn’t –?” It was typical of the day, really. We just handed him a beer.

Crowded House will tour Australia in 2022.