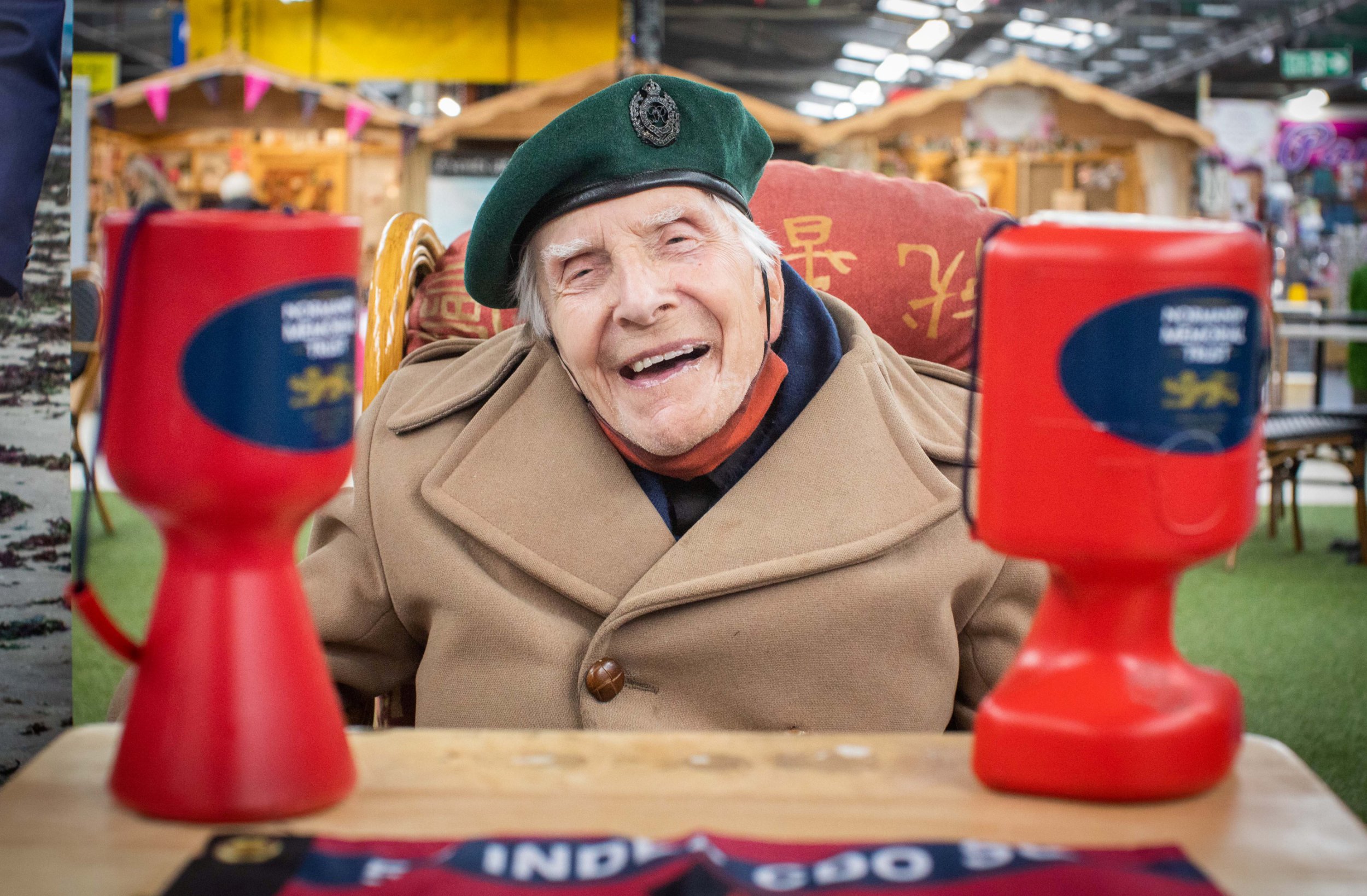 One of Britain’s last surviving D-Day heroes is doing his bit to raise money for military charities – collecting for the 68th consecutive year.

Harry Billinge, 96, has also just returned from a trip to France, completing what he described as his ‘last duty’ to pay tribute to his fallen friends who died on the Gold Beach during the landings in 1944.

He travelled back across the Channel to support a tribute recording the names of all 22,442 service personnel who died under British command on D-Day and the Battle of Normandy.

After collecting at least £50K towards the construction of the memorial, he said he was incredibly moved to see the names of his fallen friends carved in stone during the unveiling last month.

But harry didn’t come home to St Austell, Cornwall, to put his feet up – he has already been out collecting again.

The vet has now spent an incredible 68 years raising money for military charities – and said his new-found ‘celebrity status’ meant people were queuing this week to put money in his tin.

Harry, was a former chair of the Cornwall branch of the Normandy Veterans Association, President of the Royal Engineers Association and collected for the Royal British Legion Poppy Appeal for 64 years.

In 2018, he turned his support to The Normandy Memorial Trust where he has since raised more than £50k through collecting at his local market.

‘I don’t think I could give you words to it, about how I felt,’ says Harry.

‘It was very, very moving for me, and it still moves me now. I had a wonderful time because everyone there knows me now in Normandy.’

Harry was just 18 in 1944, serving with the 59th Independent Squadron of the Royal Engineers when he was part of the first wave on Gold Beach.

He adds: ‘I was overwhelmed with kindness and loving people.

‘It was a very sad visit for me, and I’ve never been able to forget D-Day, it’s a really sad day – has been all my life.’

But Harry says he isn’t done yet. Aiming to inspire others and keep fundraising for the memorial which plans to build an educational facility at the site, Harry is still out three days a week gathering money to support the monument.

‘Other people have been so inspired, the commando’s, 24 Commando, gave me a cheque towards the monument for £4,000. I’m very glad that the memorial is nearly finished,’ he says.

‘I’m still collecting though, because they’re going to build an educational centre there now, so it’s not quite finished yet.

‘I cant put words to any of it, everyone was lining up yesterday to put money in my tin.’

Harry recounted how overwhelmed he was to see the name of his friend, whom he knows in the military fashion of using last names as ‘Leeds’, a brother in arms who died on Gold Beach that day.

‘I found a couple of my mate’s graves there, namely a man called Leeds, he had a three-week old baby at the time when he died,’ he says. ‘He died in my arms.

‘My generation saved the world.’

Talking about how he’s lived to such an astonishing age of 96, Harry says that anyone can do it with the right motivation.

‘If you’ve got something that is overpoweringly important to you, then you’ll do it. I’m not ready to die yet, I’ve still got things to do, and that’s why I’m taking it easy now,’ he says.

‘Everything I’ve done has been for the memorial, and people all over the world now know me.

‘I’m not a proud man, pride is a deadly sin, but I am very happy that I was able to collect money and do my bit.’

The British Normandy Memorial, designed by British architect Liam O’Connor, cost nearly £30m and funded by the British government and private benefactors. It stands on a hillside overlooking ‘Gold Beach.’