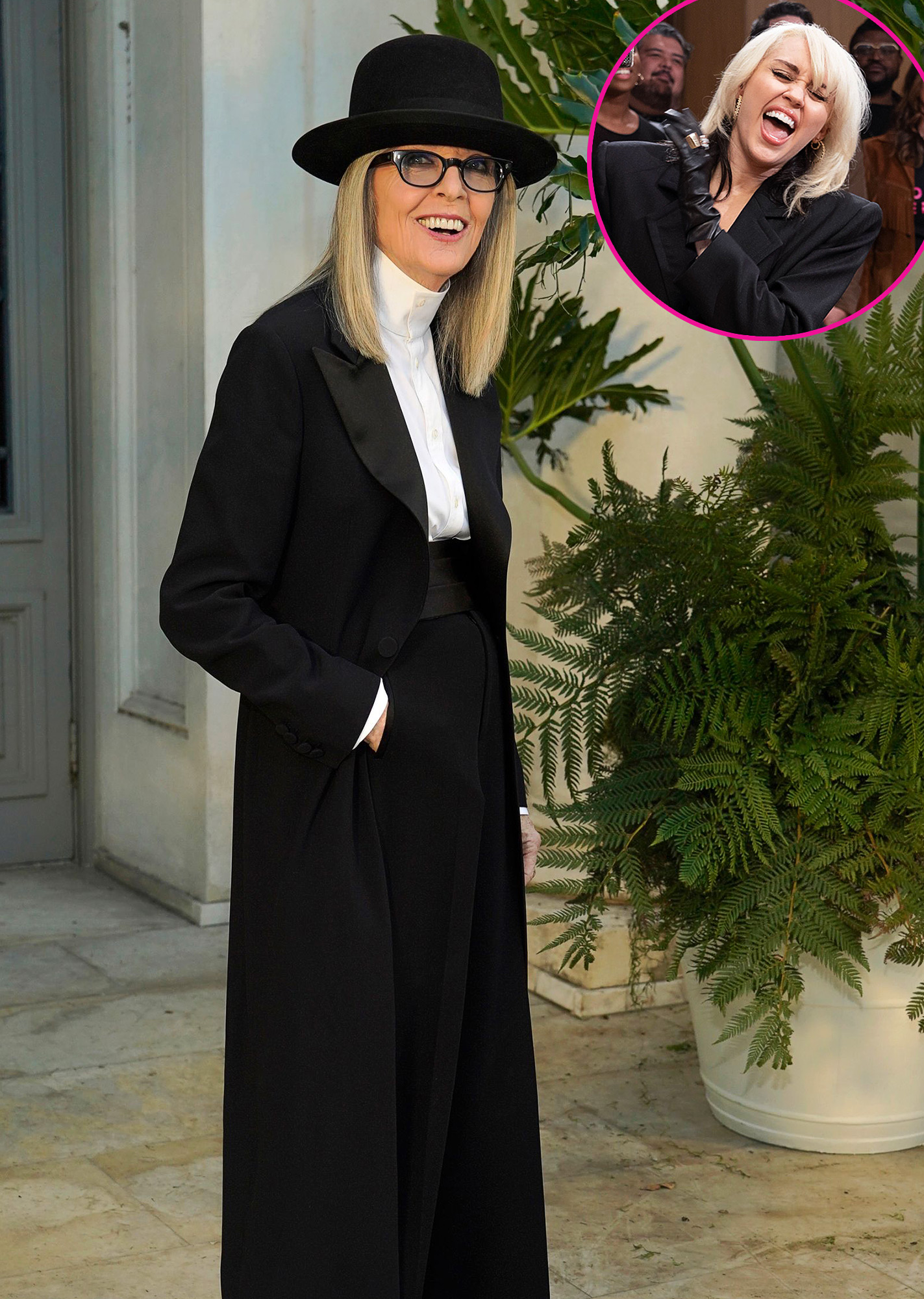 “YOUR INCREDIBLE SONG GAVE ME A REASON TO DANCE IN MY OWN BACKYARD!” the Father of the Bride actress, 77, wrote via Instagram on Friday, January 20.

Keaton proceeded to tape herself dancing all over her yard — and in the grass — as Cyrus’ voice rang out in the background. The Annie Hall star, who wore a black, long-sleeved shirt, black pants, matching moto boots and a grey hat, dedicated the video “To Miley.” 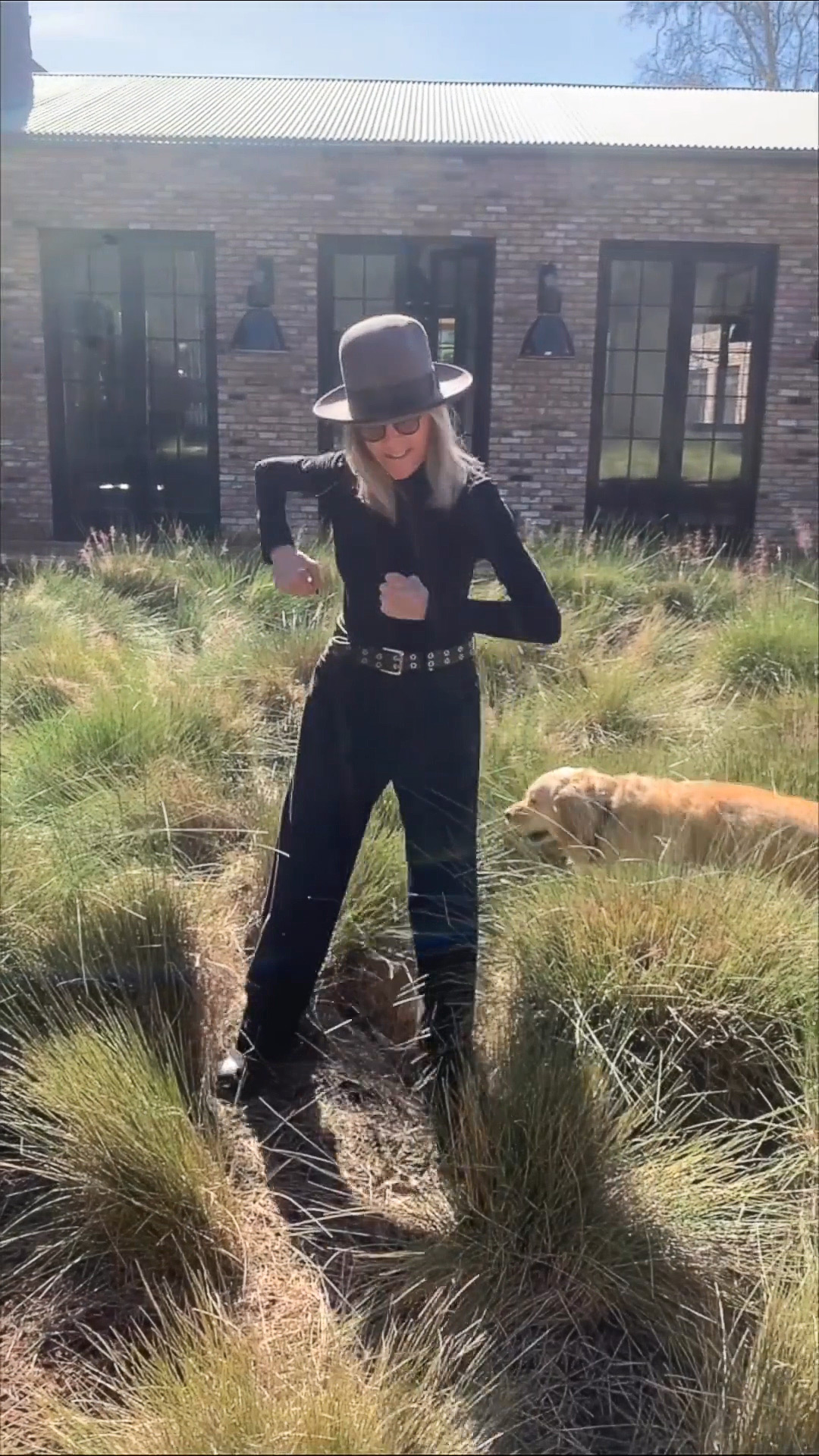 At one point in the clip, Keaton dropped to the ground before her dog joined her for a few seconds of fun galavanting around her Los Angeles pad. “SAME! 🌸🌹🌺🌷🌼💐,” Kerry Washington commented on the sweet video, while Lindsay Lohan replied with a series of heart-eyes emojis.

Cyrus, for her part, reshared the fun video via her Instagram Story on Friday. The 30-year-old musician tagged Keaton and added a red heart emoji to show her love.

The Hannah Montana alum released “Flowers” on January 13 and it instantly got fans talking based on some of the lyrics, which appeared to be about Cyrus’ ex-husband, Liam Hemsworth.

“I didn’t wanna leave you, I didn’t wanna lie / Started to cry, but then remembered I can buy myself flowers / Write my name in the sand,” she belted out in the song, which dropped on Hemsworth’s birthday. “Talk to myself for hours / Say things you don’t understand. I can take myself dancing and I can hold my own hand. Yeah, I can love me better than you can.”

In the corresponding music video, Cyrus dances around a mansion, lounges by the pool and successfully moves on with her life without a partner.

The “Party in the USA” singer hasn’t publicly commented on the song’s inspiration, but her sister Brandi Cyrus acknowledged fan theories on Wednesday, January 18.

“Miley’s new song, all the tea … and all the narratives that fans are making on TikTok. It’s so good,” Brandi, 35, told Wells Adams on their “Your Favorite Thing” podcast. “The song did come out on his birthday — was that on purpose? I don’t know. Can’t say. Genius, though.”

Miley met the Australian actor, 33, on the set of 2010’s The Last Song. The duo dated on and off following production and Hemsworth proposed in June 2012. The twosome broke up in 2013 but rekindled their romance three years later.

Miley Cyrus and Liam Hemsworth: A Timeline of Their Relationship

The Hunger Games actor and the “Wrecking Ball” songstress tied the knot in December 2018. However, they separated the following year and finalized their divorce in January 2020. Hemsworth has since moved on with model Gabriella Brooks.

While Miley has been quiet about “Flowers” origins, her godmother, Dolly Parton, exclusively told Us Weekly on Tuesday, January 17, that it does stem from her past.

“I love that song,” the “Jolene” songstress, 77, said. “I don’t know who wrote that, but I have a feeling she had plenty to do with it. It was her story if not her actual writing.”