Revealed: How much meat is REALLY in your favourite supermarket burgers – and the ‘acidic’ cooking smell that gives away if it’s full of filler

Patties from Asda, Tesco and Waitrose are packed with ‘filler’ ingredients like rusk, water and flavouring, as well as beef, according to the study.

Analysis was carried out by online retailer Farmison & Co (F&Co), which tested a range of beef burger patties from a selection of its UK rivals. 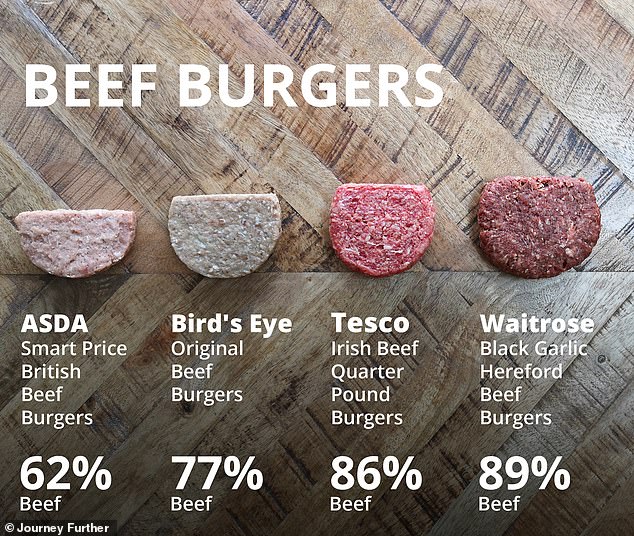 Analysis was carried out by online retailer Farmison & Co (F&Co), which tested a range of beef burger patties from a selection of its UK rivals.

How much beef is in your burger?

Percentage of beef contained in a single patty, based on analysis by retailer Farmison & Co:

Results show Asda’s Smart Price 10 British Beef Burgers (£1.62) contained the least amount of beef (62 per cent) while M&S Best Ever Burgers (£16 for eight) came out on top with 93 per cent.

But Asda steps up its game with its Extra Special burgers (£2.50), which offers the same as F&Co with 94 per cent beef.

MailOnline has approached all brands named in this article for comment.

Experts at F&Co also shared their tips for spotting whether a patty is packed with beef. 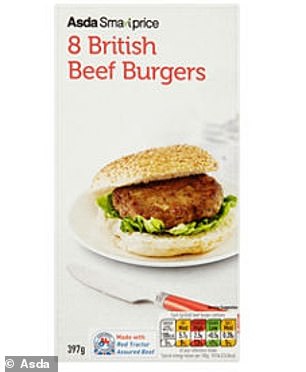 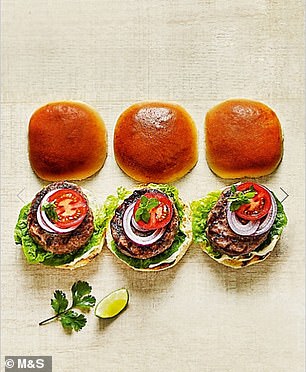 Results show Asda’s Smart Price 10 British Beef Burgers (£1.62), pictured left, contained the least amount of beef (62 per cent) while M&S Best Ever Burgers (£16 for eight), pictured right, came out on top with 93 per cent. The study was carried out by a rival burger brand

A spokesperson said meat that has had ‘a lot of other ingredients’ added to it can sometimes ‘turn a vibrant pink with an acidic smell’ once cooked.

‘This is a sign that the product might be overworked, poor quality, or can even indicate that it’s an older product,’ the spokesperson continued.

Worried about beef patty ingredients? Two signs to look out for

When cooked, beef mixed with other ingredients turns a ‘deep red, purple colour

‘When it’s cooked, many would assume that it would go more greyish, but actually, it will be almost a deep red, purple colour, because of the chemical reaction between all the additives and protein cells.’

The spokesperson also urged shoppers to pay attention to the type of meat used to create the burger.

If a part like ‘chuck, fillet, or short rib’ is not named then it is ‘probably from a generic mix taken from different parts of the animal, for value rather than flavour,’ the spokesperson added.

John Pallagi, co-founder of Farmison & Co added: ‘Ultimately, we’re keen to encourage consumers to be more curious about what they’re eating and what is going into their food.

‘Gaining this deeper understanding and asking these questions around what you’re eating is so important and can often be quite eye-opening – therefore we want to raise awareness around doing so.’

What else is in your beef burger?

Chef Jeff Baker highlighted the main ingredients used to bulk up the burgers and what customers should look out for if they want better quality:

If water is high up in the ingredients list of a product, then that’s a red flag, says Jeff.

Sometimes a little water is needed, however, you shouldn’t be paying for a large quantity of water in a meat product.

The higher it is on the ingredients list, the more there is in the product.

Similar to water, if you find rusk high up on the ingredients list it means that there is a high amount of this within the product.

Rusk can be greyish in appearance, therefore when raw products (e.g. beef burgers) are more reddish in colour, this usually indicates that less rusk has been used.

Ideally, if you’re after a better quality burger, it’s best to look out for meat that has a lower rusk content.

However, something to be aware of is the word ‘flavouring’ used on its own, as this is pretty questionable, according to the chef.

‘What exactly is this flavouring; is it derived from natural flavour extracts or is it chemically created?’