The Macquarie Dictionary has announced its words of the year for 2020. David Astle, one of the judges on the committee, gives an insider's view on the selection.

Does fakeaway mean: (a) homecooked food that's similar in style to takeaway meals; (b) takeaway food disguised by the host to seem homecooked; or (c) high-end takeaway too good to seem takeaway? 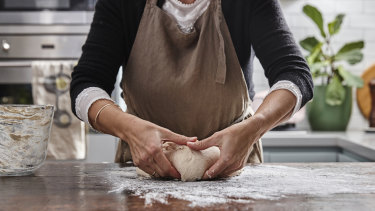 Pandemic-inspired sourdough was a mainstay of cottagecore.Credit:Jennifer Soo

Each option is succulent, and there's the rub. Crisp as the coinage seems, the word is still scootering the zeitgeist in search of its own meaning. Such doubt opened the door for lo-fi, the eventual winner of the food and drink category. Lo-fi describes a type of wine with minimal production, yet the same plonk stood no chance in the overall voting.

This year proved to be a Petri dish for neologisms. Summer infernos and life-flipping plagues can do that. Sitting at the virtual table, one of seven zoomanauts in the Macquarie Dictionary's Word of the Year committee, I realised we had a marathon ahead. The day began with Agriculture (where bee-vectoring won out) and collapsed three hours later in a special COVID-19 category.

Debates flared along fakeaway lines. Durability was another hot potato. As fun as sky puppy sounded – a poetic nickname for a bat – would the slang still be flapping in 2022? Was it really flapping now? Higher than futch I hoped, a femme-butch hybrid that also jostled for approval amid the colloquial bunch.

Other words chose themselves. Inclusion rider, the diversity clause popularised by Frances McDormand's 2018 Oscars speech, had to snare the arts section. While cottagecore – the lockdown lifestyle of crochet and sourdough – trounced catio (a cat's outdoor enclosure) and Scully effect (the X-Files inspiration for young women to enter science subjects).

No question the female surge in STEM enrolments is worth celebrating, but is Dana Scully the modern impetus? Why not Bones, or Lisa Harvey-Smith, or Lily Serna? As for catio, how 2020 is a meshwork annex for moggies?

2020-ness in fact, which isn't a word but should be, was the day's preoccupation. Bonk ban felt so 2018, admittedly revived by the Four Corners bombshell last month. Uncanny valley was a second relic, coined 50 years back by robotics buff Masahiro Mori, identifying that irksome space between cute Pokemon and human-ish androids. Neither held a candle to panda-bashing and stalkerware respectively.

Among the internet terms, blackfishing (where an Anglo-influencer acts as a person of colour to gain advantage) grappled with snitch-tagging (linking a damaging post to those in authority, or to targets of that flak). Though the section's eventual victor was doomscrolling – our 2020 habit of skimming bleak updates, until reaching a thumb-stopper (the runner-up in the communications category).

Indeed, after several rounds of elimination, pitting all category darlings against each other, doomscrolling won this year's trophy, shading Karen (the privileged stereotype sorely needing a bloke equivalent) and pyrocumulonimbus, one of January’s dramatic fire-sparked clouds that remains so satisfying to say.

As for COVID-19, this year's asterisk, and its own separate contest, voting was brisk. Twenty words vied for preference, from maskhole to infodemic, from elbow bump to doughnut day. Early in the running, bubble stole the panel's glances, until the muddle of Canberra's version popped up, conflating the bubbles of safety and bureaucracy. Which was which? Our exuberance cooled.

Allowing the charm of rona to rise, the Aussie hypocorism of a deadly virus, boasting such mutations as Miss Rona and ronavation (DIY projects attempted during quarantine). Rona it was, the COVID-19 winner. Covidiot and COVID normal grabbed silver and bronze.

Or maybe you disagree. Visit the Macquarie Dictionary website to pick your own category winners. Tell us why IKEA effect (the pride you feel in a self-made coffee table) leaves profit-for-purpose for dead. But do me a favour – leave the sky puppies alone.

The Macquarie Dictionary Word of the Year shortlist for 2020

The Macquarie Dictionary COVID Word of the Year shortlist