Proud bestie Drake shared a message of support for Adele after she released ‘Easy On Me,’ her new single from her upcoming album ’30.’

Supportive bestie Drake shared a celebratory message for Adele following the release of her new song, “Easy On Me.” The rapper, 34, shared a photo of the British singer, 33, on his Instagram Story on October 14 after the debut of her first new single in five years. “One of my best friends in the world just dropped a single,” Drake wrote atop a photo of the star, as seen HERE, adding, “WOIIIIIIII.”

The Grammy winners have been friends for quite some time now. During her recent Instagram Live on October 10 (where she teased a snippet of “Easy On Me”), the “Hello” singer even called Drake’s newly-released Certified Lover Boy her favorite album of 2021 so far. And ahead of COVID-19 lockdown in October 2019, Adele was spotted at the Canadian rapper’s birthday party in Los Angeles.

Their friendship could be traced back to 2015, when Adele declared her love for Drake’s hit song “Hotline Bling.” The singer told Canada’s etalk at the time, “I really want us to do an official remix. I love Drake. I love Drake so much. I even got the coat that’s in the video, I got it delivered the other day, I ordered it. The red one.”

Once the rapper got word, he responded to the outlet, “I’d do anything with Adele. I’d literally go to Adele’s house right now and do laundry for her.” With her relocation from London to Los Angeles with then-husband Simon Konecki and their son Angelo, 9, the besties’ friendship blossomed: the duo even rented out a bowling alley for a night out in February 2019.

Drake — Photos Of The Grammy-Winning Rapper 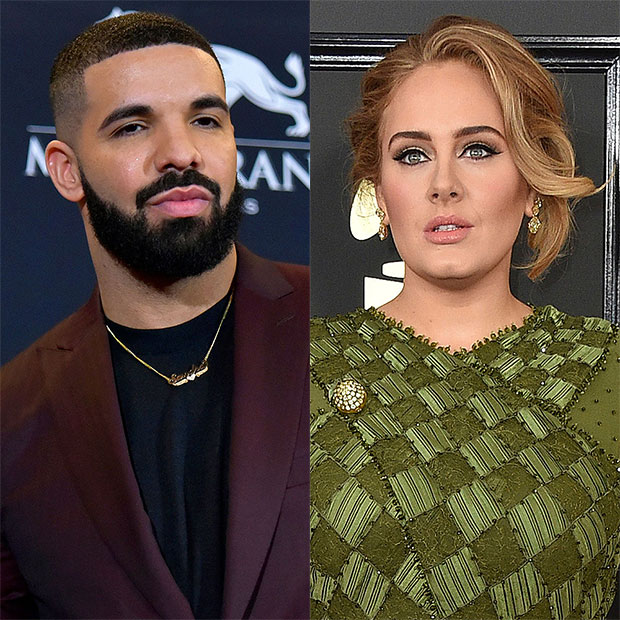 As for the emotional “Easy On Me,” the track marks the first single off the singer’s upcoming fourth studio album, 30. Set for a November 19 release, the follow-up to the singer’s acclaimed 25 was inspired by her divorce. She and Simon, a charity executive, finalized their divorce in March after five years of marriage. For her November 2021 cover of Vogue, Adele described 30 as her way of explaining the split to Angelo, who took his parents’ separation hard.

“He has so many simple questions for me that I can’t answer, because I don’t know the answer,” she said. “Like, Why can’t we still live together? That’s just not what people do when they get divorced. But why not? I’m like, I don’t fucking know. That’s not what society does. And: Why don’t you love my dad anymore? And I’d be like, I do love your dad. I’m just not in love. I can’t make that make sense to a nine-year-old.”

This prompted her return to the studio for 30, which she called different from past albums. “I realized that I was the problem,” Adele told the magazine. “Cause all the other albums are like, You did this! You did that! Fuck you! Why can’t you arrive for me? Then I was like: Oh, shit, I’m the running theme, actually. Maybe it’s me!”