US President Joe Biden has said the partnership between the United States and Australia remains as “essential today as it has ever been” in a video posted on the 70th anniversary of the alliance between the two countries.

The message on the anniversary of ANZUS comes as Mr Biden and Prime Minister Scott Morrison are expected to hold wide-ranging talks in the coming days following the hurried withdrawal of American and Australian forces and officials from Afghanistan after the takeover by the Taliban. 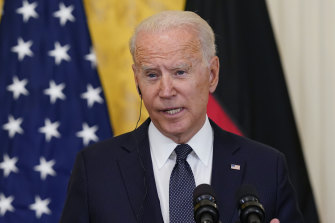 Labor leader Anthony Albanese also committed to conducting the first major review of where Australia’s troops and defences are based in a decade in a bid to forge a close bond with the US and other allies in the face of a rising and more assertive China.

In the video, posted to the US State Department’s Twitter account, Mr Biden said the anniversary of ANZUS – a three-way treaty between Australia, New Zealand and the US – was a “significant milestone” for both nations.

“Through the years, Australians and Americans have built an unsurpassed partnership and an easy mateship grounded on shared values and shared vision,” Mr Biden said. “We’re coming together to prove that democracies can deliver in a world of complex challenges.”

Biden said that America would never forget the first and only time the collective defence articles of the treaty had been formally invoked in the aftermath of the September 11 attacks.

“Our Australian friends stood with us in that darkest hour, just as our two nations stood shoulder-to-shoulder in every major conflict since World War 1,” he said.

He praised Australia for working with the US on the evacuation effort from Afghanistan, including the resettling of Afghan interpreters and others who had worked to support the allied forces.

“As we look to the future, we will continue to stand together to defend the principles we share,” Biden said.

He said the US and Australia would work together “to support a free and open Indo-Pacific” and “to promote inclusive economic prosperity in our own nations and across the region”.

“Prime Minister Morrison and the people of Australia: thank you for your partnership and your friendship,” Mr Biden said.

In a speech to the Australian Parliament, Mr Morrison said ANZUS was the “foundation stone of Australia’s national security and a key pillar for peace and stability in our Indo-Pacific region”.

“For seven decades, it has underpinned vital military, national security and intelligence co-operation between Australia and the United States. And much more besides,” he said. “It has been, and I hope always will be, a shared national endeavour; one that has evolved to meet new challenges based on enduring values.”

In his speech to Parliament, Mr Albanese said the anniversary of the ANZUS was a “significant opportunity to not just commemorate our shared history, but look forward to how our relationship will impact our respective futures”.

After six defence ministers in eight years, Mr Albanese and Labor’s defence spokesman Brendan O’Connor accused the government of “neglecting planning on posture, despite deteriorating strategic circumstances”. Defence strategists last year warned the government it no longer had a decade to build up its defences against potential threats, amid a regional arms race fuelled by China’s growing assertiveness throughout the Indo-Pacific.

“A Labor Defence Force Posture Review would ensure the Australian government is considering both long-term strategic posture and whether Australian Defence units, assets, and facilities are prepared for the military to take action in a timely way,” Mr Albanese and Mr O’Connor said.

“The 2020 Strategic Update warned of the rapidly changing circumstances in our region, and stressed that a 10-year strategic warning time for a major conventional attack against Australia is no longer an appropriate basis for defence planning.

“Reduced warning times mean defence plans can no longer assume Australia will have time to gradually adjust military capability and preparedness in response to emerging challenges. Despite this, the Coalition government has never conducted a fully-fledged Force Posture Review.”

Michael Shoebridge, director of the defence program at the Australian Strategic Policy Institute, welcomed the proposal for a new posture review but said it shouldn’t come up at the expense of the obvious moves that need to be made in the short term. This includes boosting Australia’s military presence in the north and the west of the country and helping to upgrade bases in the South Pacific such as Papua New Guinea’s main naval base on Manus Island.

“We already know ADF needs to have more offensive power and to have that need to be more present in places that that matters,” Mr Shoebridge said. “The one thing I want to see from the opposition – they really need to have some initiatives they would do early and not just a set of reviews.”