An Andrews government election promise to make the Latrobe Valley the Australian capital of electric vehicle manufacturing and create 500 much-needed jobs has collapsed.

The deal with SEA Electric to set up a factory in Morwell, announced in the lead-up to the 2018 election, has been troubled for years. On Tuesday, it was revealed the company wrote to the government last month asking to terminate the agreement. 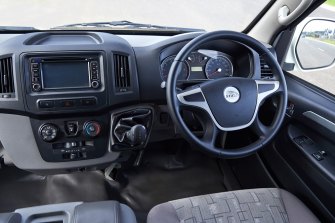 The company’s withdrawal is a major blow to the Latrobe Valley, which is still recovering from the abrupt closure of the Hazelwood mine and power station in 2017 when 750 workers lost their jobs.

The Victorian Parliament’s Public Accounts and Estimates Committee on Tuesday heard the Department of Jobs, Precincts and Regions was still considering its response.

“The company has contacted us in October this year, just recently in this financial year, and has advised us they will seek to terminate the grant, and the government is considering that,” said Beth Jones, the department’s deputy secretary for rural and regional Victoria.

Pressed by Nationals MP for Gippsland South Danny O’Brien, department secretary Simon Phemister could not say whether the jobs and project would go ahead in any form.

“At what point does the government formally announce to the community these 500 jobs are not going ahead?” Mr O’Brien asked.

Latrobe City Council mayor Sharon Gibson said the company and state government should have made good on their 2018 promise.

“Don’t promise something you don’t deliver. Why should our community be the one that suffers again?”

The company was supposed to be the lead tenant at the Gippsland Logistics Precinct.

News the proposal had fallen through came as the federal government on Tuesday detailed its plans to drive transition to electric cars by 2030 by significantly boosting charging infrastructure, particularly in regional areas. The strategy has been criticised by the motor industry, which says there are gaps in the plan that need to be addressed.

Victoria has set a sales target of 50 per cent of its new vehicles to be emissions-free by 2030, and this year introduced a controversial new levy that will slug electric vehicle drivers between 2 and 2.5 cents for every kilometre they drive.

Cr Gibson said more economic pain loomed as the Yallourn power station was set to close in 2028, in a move that will affect 500 of its workers and more contractors.

“We have looked after Victoria all these decades with cheap power. Now we need Victoria to look after us,” she said.

In March, SEA Electric confirmed it was yet to establish any operations in the Latrobe Valley and flagged it could go elsewhere after returning funding to the Victorian government in frustration.

At the time, SEA Electric president Tony Fairweather told The Age the company handed the cash back because it wanted its agreement with the state government to be redrawn.

The Andrews government expressed frustration of its own, insisting it had supported the company to complete the deal.

Ms Jones told the parliamentary committee only the company could explain why the deal had not been fulfilled.

“They’re not in a position to fulfil the milestones as agreed,” she said.

“For reasons only the company can answer to, we just have not been able to secure that [commitment].”

A government spokeswoman said it was focussed on delivering jobs and investing in the region, “and that won’t change”.