Rotterdam: Europe’s biggest hydrogen project is stepping up its search for Australian imports to help quadruple supplies of clean energy and cut the continent’s reliance on natural gas in the wake of the Russian invasion of Ukraine.

Seeking millions of tonnes of hydrogen imports, the Port of Rotterdam wants to scale up the supply of Australian hydrogen in one of the world’s biggest projects to import and generate the clean and transportable fuel. 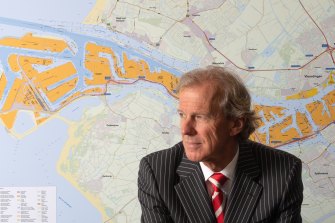 Allard Castelein, president of the Port of Rotterdam, believes Australia could produce hydrogen at a competitive price, even after adding the cost of shipping to the Netherlands.Credit:Bloomberg

But Australia is in a race with other countries to generate hydrogen from solar and wind at enough scale to export energy in vast quantities to meet a European Union goal of using 20 million tonnes of hydrogen each year by 2030, up from a target of only 5 million before the energy crisis.

Shell will commit to the biggest hydrogen generation scheme in Europe on Wednesday when Netherlands Prime Minister Mark Rutte announces the project with the energy giant’s executives at the Port of Rotterdam, aiming to provide stored energy from wind power in the North Sea.

The Port of Rotterdam runs the hydrogen project, and president Allard Castelein said his team had looked at more than a dozen countries and concluded Australia could produce hydrogen at a competitive price due to the cost profile of its renewable energy sources, even after adding the cost of shipping to the Netherlands.

“If you look at the energy demands in northwest Europe, it’s inconceivable that we will be self-sufficient in energy,” he said.

“We could put all the windmills offshore, they could become bigger and more powerful than they currently are, but still we would run out of space. So we will always need to be a net importer.

In a test of the model, Australia supplied liquid hydrogen by ship to Japan in January from Victoria’s Port of Hastings under a $500 million scheme using brown coal to produce the gas.

A cheaper way to ship the fuel could be by using hydrogen to create liquid ammonia, which has a much higher energy density by volume when stored at minus 33 degrees. The Rotterdam project involves ammonia as well as hydrogen import terminals. 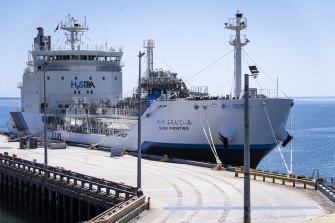 Castelein said Australia was in a “good and strong position” to supply the fuel at a time when the war in Ukraine highlighted Europe’s dependence on Russian gas and the need for renewable alternatives.

“Europe will have a very, very hard time dealing with an abrupt supply disruption, which is not unlikely to materialise,” he said.

“Europe as a continent will not be able to replace gas for gas.”

The Rotterdam LNG import terminal is running at full capacity and the only other terminals nearby are at Zeebrugge and Dunkirk, while Germany is leasing floating import terminals. The International Energy Agency says the European Union imported 155 billion cubic metres of natural gas from Russia last year and that alternative suppliers might only provide 30 billion cubic metres within a year.

“The magnitude of the challenge is enormous, not in the least because 2030 is around the corner,” Castelein said of the targets for commercial hydrogen.

“That’s why those countries that have assertive development plans, which are conducive to allowing new businesses to start up and having the materials and the people and the permits readily available, will be able to become a major supply source.”

The Port of Rotterdam is the transfer point for 13 per cent of Europe’s fossil fuel imports – oil, coal and LNG – but is moving rapidly to clean energy with a mix of hydrogen imports and domestic generation.

It wants to achieve commercial production and imports of hydrogen from 2025 so it can scale this up to 4.6 million tonnes each year from 2030, about one-quarter of the forecast for the EU.

The EU plan assumes half the hydrogen will come from imports, highlighting the opportunity for Australia when countries such as Chile, Uruguay and Iceland are also planning hydrogen projects and Saudi Arabia wants to become a major hydrogen producer after decades of dominance in oil.

The Port of Rotterdam has early agreements with Queensland, Western Australia and Tasmania but the most advanced appears to be with South Australia, where Premier Peter Malinauskas has plans for a $593m hydrogen plant, triggering warnings about the financial risk.

Castelein said one advantage for Australia was its history in fuel exports while the other was its ability to produce hydrogen at about one-third of the cost of north-west Europe, the result of better solar and wind power, given the differences in climate.

Green hydrogen is produced by electrolysis when water is split into hydrogen and oxygen using electricity from renewable sources, creating a clean fuel that can be transported and stored.

Burying the emissions would create “blue” hydrogen, which the TNO says could be done using carbon capture and storage in the North Sea in the biggest project of its kind in the world.

“We believe there’s a clear case for blue hydrogen,” said Castelein, who has run the world’s tenth-biggest port since 2014 and was previously vice-president for environment at Shell.

“But green is clearly the aspirational goal. We see blue as only having a role as a temporary source and not necessarily in the lead of the transition. Green shall lead the transition, blue will be part of the equation but phase out over time.”

The port authority, which is owned by the city of Rotterdam and the Netherlands government, runs the hydrogen project by signing deals with companies to build each part of the production chain. Shell and Air Liquide will produce hydrogen on site, while Air Products and Gunvor are planning a hydrogen import terminal. With fossil fuels expected to be part of the transition, the plan also forecasts the use of carbon capture and storage in depleted oil fields in the North Sea.

The Rotterdam terminals and hydrogen production facilities are expected to cost several hundred million euros each, while the pipeline being considered from Rotterdam to the industrial zone of the Rhine could cost 2.5 billion euros.

“These are tremendously aspirational timelines but, having said that, we will need a mindset that says it is necessary and thus makes it feasible.”