The European Union’s top diplomat in Canberra has urged China to have a “proper discussion” with Australia over its multibillion-dollar trade disputes and left the door open to the EU joining a claim against Beijing at the World Trade Organisation.

The EU’s ambassador to Australia, Michael Pulch, said Europe’s message to China was: “We do have an international system that guides our trade and China should apply these the same way that it expects others to apply them.” 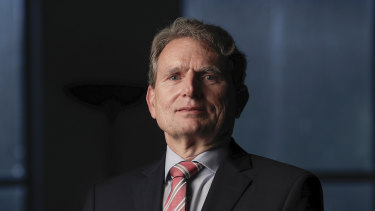 The EU’s Ambassador to Australia, Michael Pulch, says Europe wants China to have a proper discussion with Australia.Credit:Alex Ellinghausen

Over the past year, China has imposed more than $20 billion of tariffs on Australian goods – including beef, barley, wine and lobster – in response to Canberra’s push for an independent inquiry into the coronavirus, as well as other national security decisions. Australia has already commenced a WTO claim against China on the barley dispute, while it is close to launching action on the wine tariffs.

In an exclusive interview with The Sydney Morning Herald and The Age, Dr Pulch said Europe’s general approach was to join WTO claims “whenever there’s a systemic issue at stake”. Asked whether Beijing’s trade strikes against Canberra posed a systemic threat, Dr Pulch said: “There are several issues that are … trade-restrictive for Australia with regard to China.

“We always are in favour that countries open up a possibility to talk and discuss this issue,” he said. “So we fully support Australia’s need to have a proper discussion with the Chinese side on these issues, as we would wish to have that with China whenever some of our trade problems are concerned.”

The EU is currently developing an Indo-Pacific strategy as it looks to boost its presence in the region amid escalating tensions including in Hong Kong, the South China Sea and the Taiwan Strait. Dr Pulch said the strategy would likely be finalised before the end of the year.

The European Parliament last week voted to not ratify an investment agreement with China until Beijing removes tit-for-tat sanctions it imposed against European officials, lawmakers and researchers. China imposed the sanctions after Europe and other countries sanctioned Chinese officials over human rights abuses of the Uighur population in Xinjiang province.

Dr Pulch said the EU-China investment deal had been “shelved” and for the time being “there will be no incentive or no move to actually put it forward for ratification”.

“The fact that the Chinese government thought it was wise to put members of European Parliament on the sanction list as a reaction to collective Western concerns about what is happening in Xinjiang, meant that the European Parliament, which has to ratify this agreement, is obviously not in the mood to do so,” he said.

“The agreement itself would be quite useful. A lot of the market access openings that we negotiated with China are actually … for everyone.”

Dr Pulch didn’t rule out Europe working closely with the Quad grouping – which includes Australia, the United States, Japan and India – but said this was a matter for the Quad. He said Europe would also push to be a member of the East Asia Summit.

Australia is negotiating a free trade agreement with the EU but there are a number of sticking points, including the Australian dairy industry’s right to use the name haloumi under Europe’s “geographical indications” system.

Dr Pulch said “there is no deal-breaker” but there were a number of issues still to work out including geographical indications and market access for agriculture, services, digitalisation and intellectual property rights.

He said Europe also wanted a whole chapter in the agreement on climate change and the environment so that it could “contribute positively to our wish to address climate change”.