A family’s recent visit to Walt Disney World’s Magic Kingdom park had been going well until they found a yellow note attached to their vehicle’s windshield.

The note turned out to be an anonymous and unofficial “parking violation” slip that someone had left on the Proefrock family’s wheelchair-accessible van.

While the harshly-worded slip included a list of insults to express a stranger’s contempt for “inconsiderate” parking jobs, Tricia Proefrock says her family received approval to park their van in two handicapped spots when there were no ramp-accessible spots available.

It’s an instruction Tricia and her family have reportedly become familiar with in the last three years or so whenever they’ve traveled to the theme park on peak days from their Palm Beach Gardens, Fla. home. 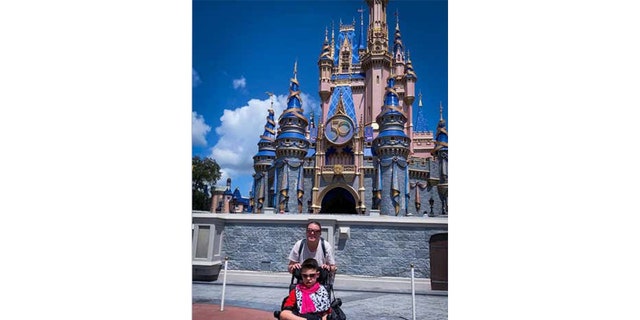 Tricia and Mason Proefrock recently traveled to Walt Disney World’s Magic Kingdom park. The pair have visited the theme park multiple times with their family in the last three years or so. During their visits, Tricia says park staff advise the family to park their van in two spots when ramp-accessible ones aren’t available.
(Tricia Proefrock)

Her son, Mason, 13, requires a wheelchair to get around since he has Lennox-Gastaut Syndrome, an epileptic condition.

Tricia says the family van had a handicapped placard displayed in its rearview mirror and was parked in the zone that’s designated for guests with disabilities. However, the parking violation slip still made its way onto the Proefrocks’ windshield despite other spots being available, according to Tricia’s account.

The creator of the slip wrote they have doled out their judgment because they hope the insults would elicit a change in the driver’s parking behavior.

“This is not a ticket, but if it were within my power, you would receive two. Because of your bull-headed, inconsiderate, feeble attempt at parking, you have taken enough room for a 20 mule team, 2 elephants, 1 goat, and a safari of pygmies from the African interior,” the note said. “The reason for giving you this is so that in the future you may think of someone else other than yourself. Besides I don’t like domineering, egotistical or simple-minded drivers and you probably fit into one of these categories.” 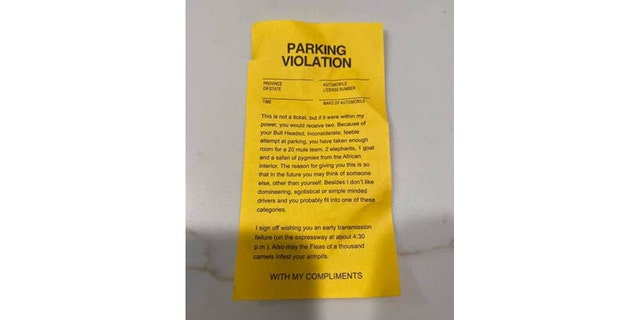 The Proefrock family received an anonymous and unofficial "parking violation" slip during their recent trip to Walt Disney World. The harshly-worded note attacks the character of the driver with insults and wished misfortune.
(Tricia Proefrock)

Since sharing the note and her family’s story with the public, Tricia tells Fox News she’s received outpouring support from kindhearted people who are “understanding of situations like mine.”

She went on, “I would like to say that while I was originally humiliated and angered by the fake violation, it’s not the real problem. The real issue to me is the lack of available ramp access spaces at [Walt Disney World]. They are so amazing in so many ways when it comes to accessibility, but they can do so much better in the parking lot.”

Disney Parks did not immediately respond to Fox News’ request for comment.

The Orlando theme park’s website states there are disability parking lots available at Magic Kingdom, Epcot, Disney’s Hollywood Studios and Disney’s Animal Kingdom, but there are no guidelines on how to park when ramp-accessible spots are full.

Visitors who need assistance with parking can seek help from cast members at each theme park’s Auto Plaza or contact the hospitality giant’s departments of Guest Services or Disability Services.