Fresh-out-of-prison Fyre Festival fraudster Billy McFarland chokes up on GMA as he blames infamous scam on his ‘insecurity’ – but fails to reveal how he’ll pay back $26M he still owes. So, does he deserve a second chance?

Fyre Festival fraudster Billy McFarland choked up as he issued an emotional mea culpa over the sensational con – which saw him scamming investors out of $26 million – admitting that he was ‘incredibly stupid’ and insisting that it was his ‘insecurity’, not his desire for wealth and fame, that led him ‘down a path of bad decisions’.

The 30-year-old – who was convicted of fraud in 2018 and sentenced to six years in prison – put on a tearful display as he sat down with Good Morning America’s Michael Strahan on Friday morning in his first TV interview since his release from jail in March.

When grilled by Strahan about why he didn’t cancel the fated festival as soon as he realized that it was going to be an impossible feat to pull off, McFarland confessed that he was so desperate to ‘prove himself’ to his employees and investors that he refused to listen to sense.

‘I was wrong. I messed up. I was so driven by this desperate desire to prove people right,’ he said. ‘I had these early investors, backers, employees, and I think I was so insecure that I thought the only way to prove myself to them was to succeed and that led me down this terrible path of bad decisions.’ 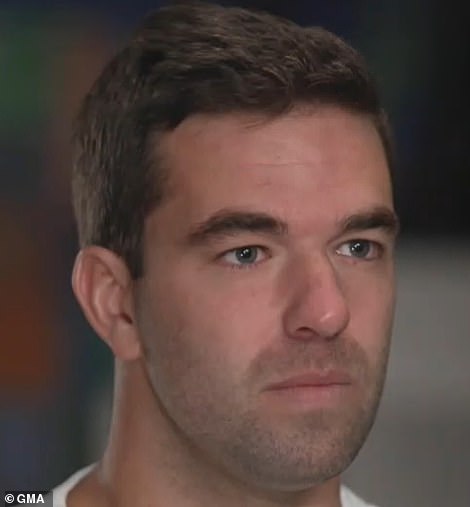 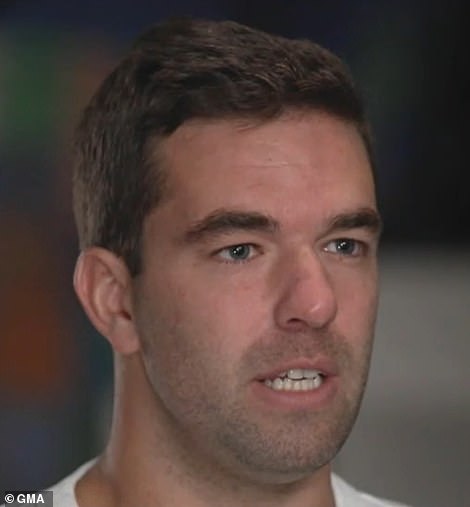 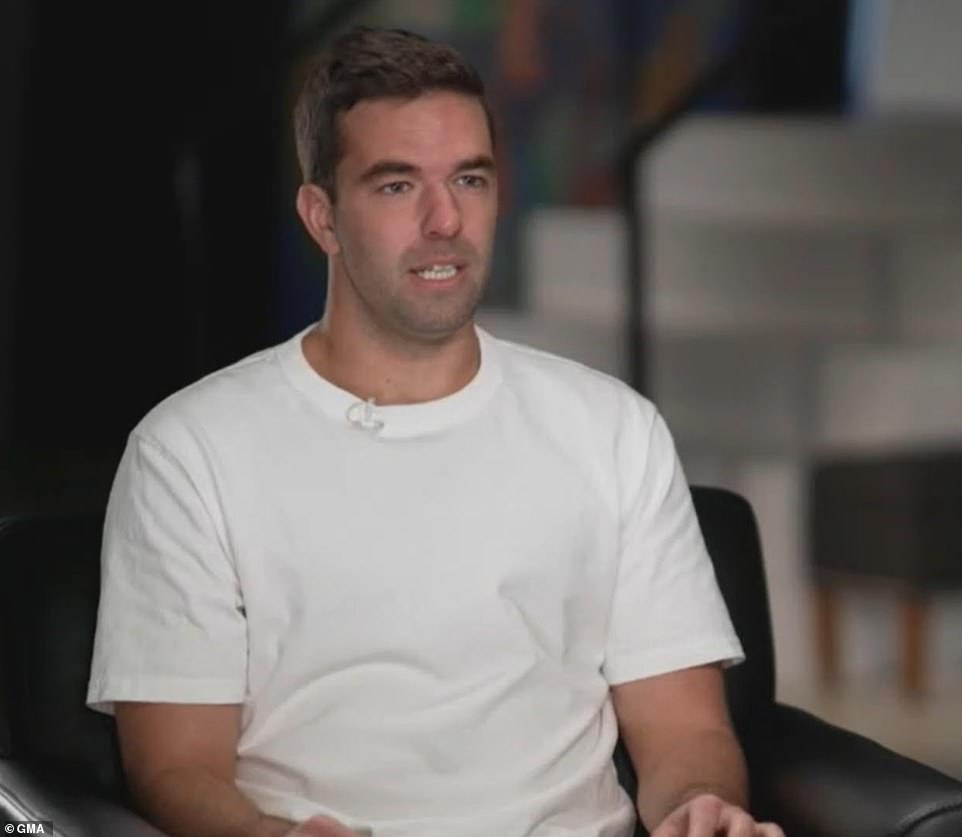 The 30-year-old fraudster – who served four years of a six-year sentence behind bars after pleading guilty to fraud – insisted he also lost everything in the con, claiming he ‘came back to New York with $100 in his pocket’

McFarland pleaded guilty to counts of wire fraud in March 2018 after scamming 80 investors into putting $26 million into the bogus ‘luxury’ Fyre Festival – which promised guests a VIP experience with lavish accommodation, top music performers, delicious food and celebrity attendees, but in reality had no food, toilets, music, or even basic accommodations.

The fraudster, who was released from prison in March of this year, having served four years of his six-year sentence, now says his priority is ‘apologizing’ to those he conned – from investors to friends and employees – although he made no suggestion about how he plans to pay back the $26 million he owes in restitution.

‘I need to apologize and that is the first and last thing that needs to be done. I let people down,’ he went on.

‘What I told investors was wrong and I think the hardest thing for me is the trust that I violated… whether it was friends, investors, or employees, people gave up a lot to try and make this happen.

‘How do I call them now and look them in the eye when I let them down? I just really should have canceled everything and stopped lying.

‘I should have listened [to my employees]. There is no excuse.’

McFarland insists however that he also lost everything in the Fyre Festival scam – which has been torn apart in multiple documentaries and podcasts – claiming that he returned to New York City following the disastrous event with just ‘$100 in his pocket’.

‘I put every dollar I had or could find to make this festival happen. I literally came back to New York after with $100 in my pocket,’ he said.

As far as his future is concerned, McFarland is undeterred as far as upcoming business ventures are concerned – in fact he has already offered up a teasing hint about what his comeback might entail, posting a cryptic video to TikTok earlier this month in which he shared scant details about a new event to which ‘everyone’s invited’. 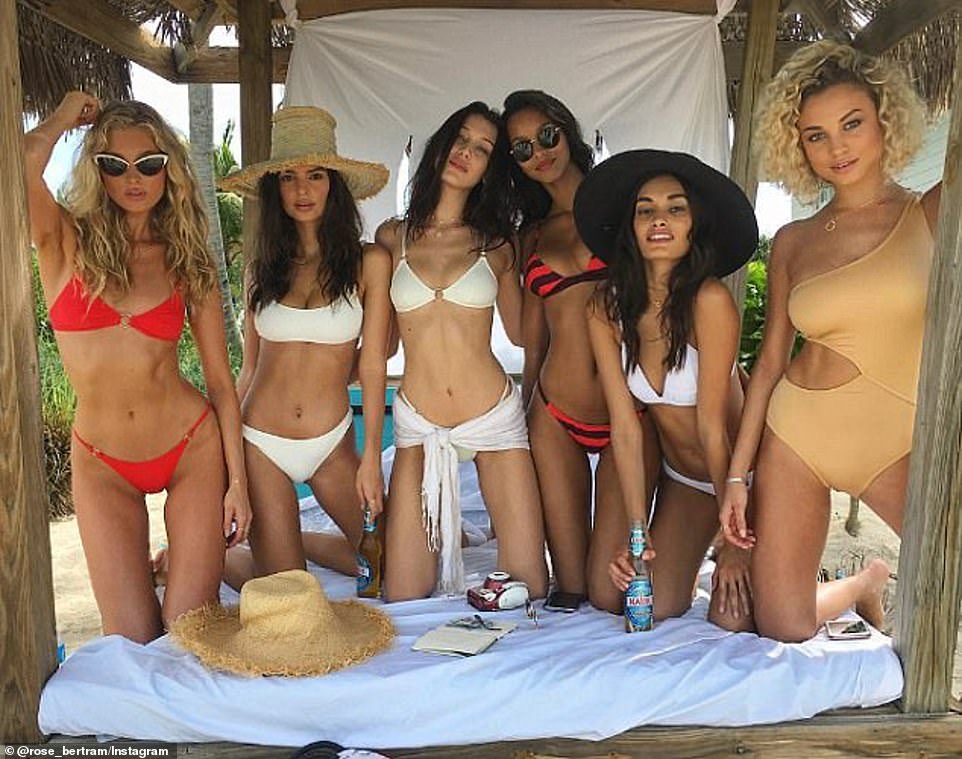 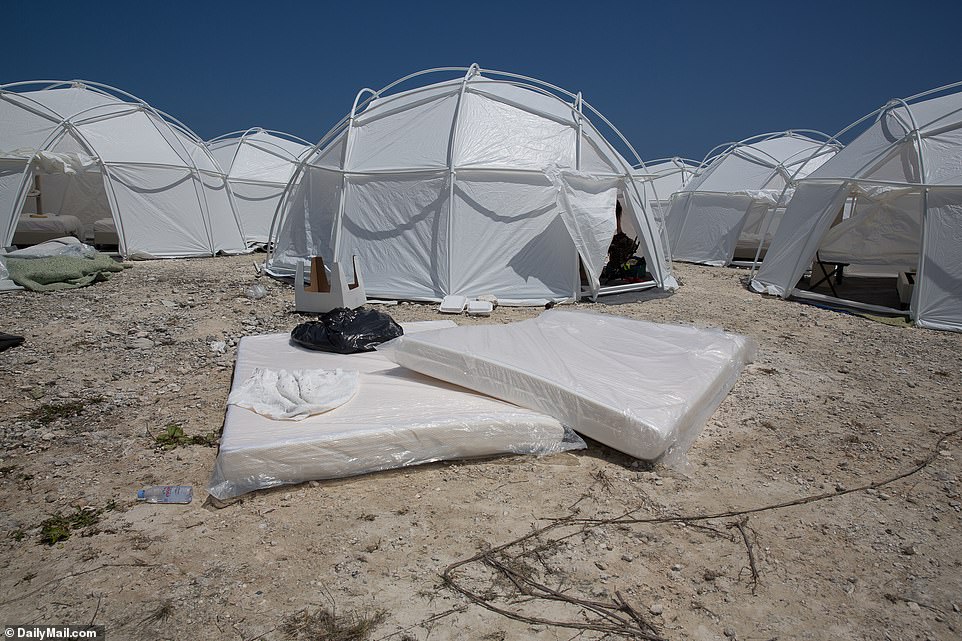 However in reality the event had no food, toilets, music, or even basic accommodations. Despite being aware that the festival was going to be a disaster, McFarland continued to insist he could pull it off, blaming that decision on his ‘insecurity’

The fraudster characterized the event as a way for him to make amends for his previous misdeeds, prefacing the video with the admission that he ‘f***ed around.’

In the video he revealed a cryptic map of what appeared to be a treasure map of a Caribbean island, and promised he would reveal all the details of his latest scheme in November.

However, McFarland admits that his comeback may well sink as a result of his Fyre Festival scam – which he says may well have been his ‘one shot’ at business success. 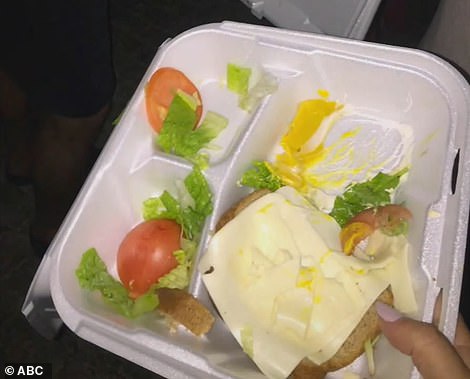 A pathetic cheese sandwich that was handed to guests in a Styrofoam container became a representation of the disaster that was Fyre Festival after it was shared on social media, where it quickly went viral

‘I understand and I think for me it needs to start with finding internal pride,’ he said when asked whether he’s aware that many people may never trust him again – or forgive him.

‘I want to be proud of myself first, and I think if I can do that and live like that for a long period of time, I might have a second chance.

‘But if I don’t, I understand, and I committed far more ethical and moral violations than most people do in many lifetimes so I get that if that was my one shot.’

McFarland claims his time in jail – which saw him placed in solitary confinement on multiple occasions as punishment for violating the rules by doing several interviews while behind bars – also gave him a new perspective on how to do business.

‘I used to take pride in getting things done and not how things got done,’ he shared. ‘I think going forward the biggest thing for me is building relationships throughout the process. Whether there’s success or failure in the business sense, it’s more about how it’s done instead of taking pride in this “by all means” idea that’s wrong.

‘I went way too fast before, so I need to do everything now in a manageable way that I can actually make work.’

The interview comes more than five years after McFarland earned worldwide infamy for orchestrating the Fyre Festival scam – which saw him team up with rapper JaRule to draw millions in investments with the promise of putting on a first-of-its-kind, luxury music festival event in the Bahamas with models, DJs, luxury dwellings and extravagant meals.

McFarland paid models like Kendall Jenner to promote the event on Instagram and blasted seduction promo videos and pictures to lure people into buying tickets that were sold at thousands of dollars each. 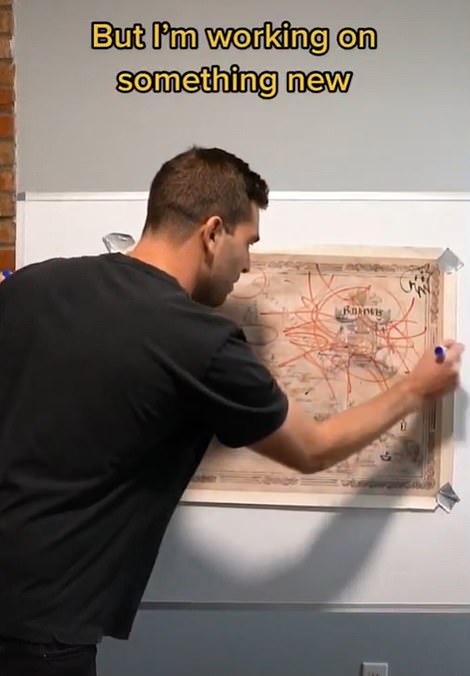 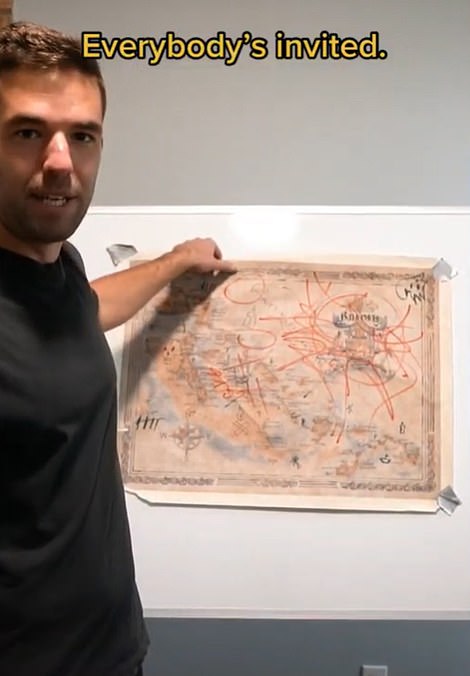 McFarland is undeterred as far as upcoming business ventures are concerned – in fact he has already offered up a teasing hint about what his comeback might entail, posting a cryptic video to TikTok about a new event to which ‘everyone’s invited’ 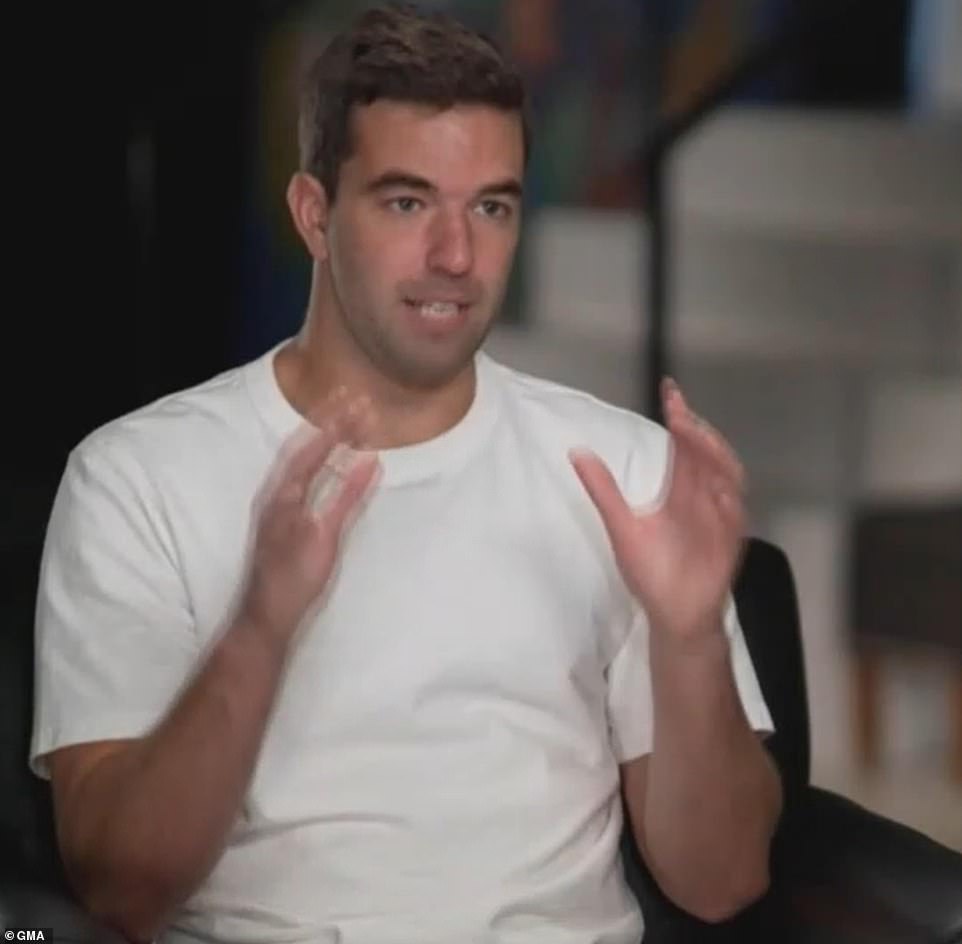 However, McFarland admits that his comeback may well sink as a result of his Fyre Festival scam – which he says may well have been his ‘one shot’ at business success

But the event was a disaster, with people arriving on the island of Great Exuma to find a scene more closely resembling a disaster relief camp than a luxury festival.

Court filings documents described the scene met by concert goers upon their arrival as ‘total disorganization and chaos.’ The ‘luxury accommodations’ were FEMA disaster relief tents, the ‘gourmet food’ was barely passable cheese sandwiches served in Styrofoam containers and the ‘hottest musical acts’ nowhere to be seen.

The festival sold a total of around 8,000 tickets for two weekends. With attendees having spent between $1,000 to $12,000 on ticket to the festival, it was cancelled on its opening day, leaving people stuck on the island without many basic amnesties.

Two documentaries, one on Netflix and another on Hulu, were made detailing the event’s organization and ensuing chaos.

McFarland was arrested in June 2017 and pleaded guilty to numerous fraud charges relating to both the Fyre Festival and his company NYC CIP Access, which also sold fake tickets to events such as the Met Gala.

He was sentenced to six years in prison in October 2018 and ordered to pay $5 million to two North Carolina residents who spent about $13,000 each of VIP packages to the Fyre Festival. Ja Rule was cleared of any wrongdoing a year later.

Numerous lawsuits were also filed against the pair.

‘I cannot emphasize enough how sorry I am that we fell short of our goal,’ McFarland said in a statement in 2017, but he declined to comment on specific allegations.

‘I’m committed to, and working actively to, find a way to make this right, not just for investors but for those who planned to attend.’

The organizers attributed the event’s cancellation to a number of factors, including the weather. But some employees of the Fyre company said its bosses has invented features of the event – such as $400,000 accommodation called the ‘Artist’s Palace ticket package – just to see if people would by them.