More employer-sponsored migrants and those destined for regional areas will be brought into the country under the federal government’s skilled visa program amid calls for it to overhaul the system to deliver billions of extra dollars to the budget.

While boosting employer-linked visas, the overall number of skilled migrants will remain the same with the government cutting the number of people on its global talent and business investment schemes as businesses continue to raise concerns about a shortage of skilled workers. 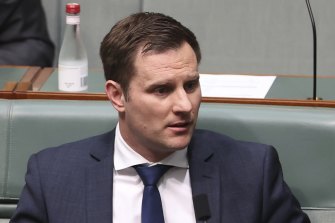 Immigration Minister Alex Hawke has re-jigged the nation’s skilled migrant intake with more people to come in as employer-sponsored.Credit:Alex Ellinghausen

Employer sponsored visas will be lifted to 23,500 from 22,000, the regional visa will be expanded by 17 per cent to 13,150 positions while an extra thousand will be available through the skilled independent visa.

These changes to the various skilled visa programs are being made as the country faces its biggest net exodus of people since World War I. Net overseas migration is expected to be minus 96,600 this financial year with another 77,400 net departures in 2020-21.

Immigration Minister Alex Hawke said he was able to vary the make-up of the skilled migration scheme to deal with economic issues.

“This flexibility allows recalibration of the composition of skilled visa places in response to health, border and economic conditions arising from the pandemic and it ensures Australia’s migration program supports our planning for the safe reopening of Australian borders to international travel,” he said.

But some believe there should be even more substantial changes to the skilled migrant intake.

The independent Grattan Institute think tank released a report on Sunday night that showed a major overhaul to the skilled visa system would deliver financial benefits to the country and the federal budget.

It found recent changes to the skilled intake, especially around the business innovation visa, had reduced the number of other skilled migrants who would make a larger and longer-lasting contribution.

Lead report author Brendan Coates said people coming in on the business visa were more likely to be older, less well-educated and ultimately earned less than those coming in on other visas. More than 50 per cent of people on these visas had poor English skills compared to other migrants.

People brought in by employers were younger and earned more which ultimately meant they contributed more financially.

Mr Coates said axing the investor visa stream, and re-allocating those spaces to other skilled migrant visas, would deliver a $4.4 billion budget boost.

“One positive from the COVID catastrophe is the unique opportunity for Australia to reset and improve our skilled migrant intake,” he said.

“Our report shows how we can seize this moment to make Australia an even better place – for those of us who already live here and for those who aspire to come here.

“Skilled migrants tend to be younger, have more skills, and earn higher incomes than the typical Australian – so they generate a fiscal dividend for Australians because they pay more in taxes than they receive in public services and benefits over their lifetimes.”

The budget benefit would climb to at least $9 billion, according to Grattan, if the minimum wage threshold for employer-sponsored visas was lifted to $80,000 from $53,900.

Mr Coates said with a much higher minimum wage, the government could also axe its list of “skill shortage sectors” which itself funnelled many migrants into lower-paying jobs.

Our Morning Edition newsletter is a curated guide to the most important and interesting stories, analysis and insights. Get it delivered to your inbox.