The proposed new federal anti-corruption watchdog will conduct its investigations largely behind closed doors as the Albanese government prepares to stare down a push by the Greens and crossbench to lower the threshold for holding public hearings.

Debate on the bill to establish the National Anti-Corruption Commission will start today, with the bill likely to pass by the end of the sitting fortnight with the Coalition and crossbench support. 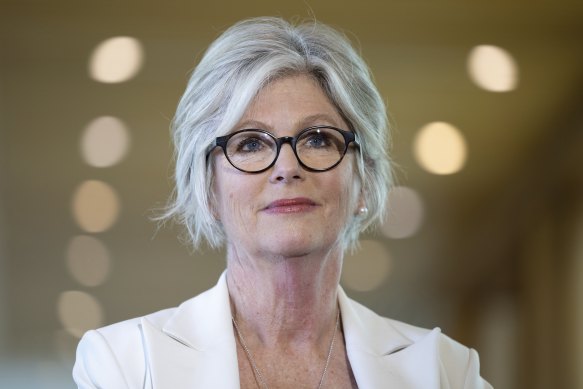 Independent member for Indi Helen Haines says she will push for the “exceptional circumstances” test to be removed from the bill to establish the National Anti-Corruption Commission but expects the government and Coalition to team up to defeat it.Credit:Alex Ellinghausen

But a fight by Independent MP Helen Haines, the Greens and other crossbenchers to amend the bill to remove or relax the provisions that limit public hearings to “exceptional circumstances” is expected to be thwarted by the government and Coalition.

Haines, who has been a key player in the push for a federal integrity body, said she would seek to scrap the exceptional circumstances clause in section 73, viewing it as the biggest flaw in an otherwise “very good bill”, but she was not optimistic it would be widely supported.

“I’m really disappointed that the government seemed reluctant to budge on this because I think it is a real problem in terms of transparency,” Haines said.

“This is going to be something for us all to watch when this commission is stood up – just how often we see a public hearing. That will be the test really, about whether the clause was ever required.”

Labor will instead seek to amend the bill in line with the six recommendations made by a parliamentary committee earlier this month, such as extending protections for the non-disclosure of identities of journalists’ sources and strengthening the remit of the NACC Inspector’s oversight function.

The exceptional circumstances test is modelled on a similar provision used by the Victorian Independent Broad-based Anti-corruption Commission. During the parliamentary inquiry into the bill, IBAC commissioner Robert Redlich warned against adopting its threshold for public hearings, saying it had placed an “artificial limit” on the state agency.

The Coalition supports the exceptional circumstances threshold, and the government has been accused by crossbenchers of striking a late deal with the opposition on the provision – which it has denied. While the provision is a key sticking point, the bill otherwise has widespread support across the Parliament.

Greens justice spokesman David Shoebridge said the corruption watchdogs in the two biggest states – the NSW Independent Commission Against Corruption and the Victorian IBAC – served as case studies on the benefit of public hearings and the dangers of private hearings.

Earlier this month, the IBAC won a court injunction preventing The Age from publishing information contained in a draft report from its secret probe into Andrews government grants given to a Labor-linked union before the 2018 election. The masthead subsequently published details of the investigation based on information discovered outside the draft IBAC report.

“When NSW voters go to the polls in March next year they can pass judgement on the behaviour of the Coalition in office, having seen through ICAC’s public work how former Premier Berejikilan and her senior Ministers behaved in office. This is empowering for democracy,” Shoebridge said.

“Meanwhile in Victoria there are unconfirmed reports that Premier Dan Andrews has been questioned in a number of private IBAC hearings and that there is an ongoing private investigation into two specific grants that his office had a role in.

“It may well be that the Victorian government is above criticism and that concerns about grants and political interference are without substance. But with all of IBAC’s hearings held in private, who would know?”

ACT Independent senator David Pocock and Tasmanian senator Jacqui Lambie are also lobbying for the provision to be scrapped.

Lambie told ABC radio on Tuesday that while she was concerned about the provision she and colleague Tammy Tyrrell would still vote for the bill, saying “we certainly won’t be holding it back”.