Despite the technical legal arguments that several admitted they did not understand, most stayed as the hours ticked on to watch the case of the scientist whose firing has become a test for academic freedom. 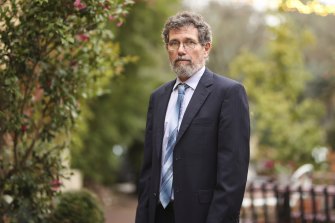 Peter Ridd in Canberra, where he debriefed with supporters after his court hearing.Credit:Alex Ellinghausen

Dr Judy Ryan, who described herself as a Canberra-based “independent scientist”, said she was there to support Ridd’s criticism of the “oxymoronic” scientific consensus on climate change.

Canegrowers Robert Malaponte and Denis Pozzebon had come down from their properties near Townsville in Queensland for the hearing to represent their local industry association.

“We just want the truth to come out,” Mr Pozzebon said.

That is what they think Dr Ridd is providing, as he is sceptical of the runoff issue and publicly critical of his former colleagues’ research on the impact of climate change on the Great Barrier Reef.

His stance has put him at odds with the vast majority of experts in his field, and as of this week, a draft decision by a United Nations body to list the reef as in danger because of climate change.

But whatever the truth of Dr Ridd’s claims, his case has the potential to set the bounds of how far scholars can go in criticising their colleagues and the universities that employ them.

James Cook University argues it sacked Dr Ridd in 2018 not because of his opinions but because he expressed them in a way that was un-collegiate and discourteous toward his colleagues and then breached confidentiality rules around the disciplinary process.

Backed by the libertarian Institute of Public Affairs and the National Tertiary Education Union, Dr Ridd has appealed all the way to the High Court, after being awarded a $1.2 million payout in his first judgment, which was reversed by the Federal Court. He argues he had a right to express himself forcefully because of his right to academic freedom.

Both sides agree Dr Ridd has such a right, but its bounds are in dispute. Dr Ridd’s barrister, Stuart Wood QC, told the court there was no way his client could have said his colleagues’ work was wrong, untrustworthy and blinded by their love of the reef without being discourteous.

“It may not always be possible to act collegially when diametrically opposed views clash in the search of truth,” Mr Wood said.

The standard for getting an academic in trouble over their statements, Mr Wood argued, should be higher. Vilifying, harassing, or bullying a colleague were appropriate standards, he said. His argument attracted a series of probing questions from the judges. They wondered how a university could enforce that right while also protecting Dr Ridd’s colleagues from abuse.

Bret Walker SC, for the university, took up that argument. “One person’s chilling effect may be another person’s appropriate restraint,” he said. Stricter standards helped ensure everyone could participate in debate, rather than just those with extreme views or a megaphone. That ultimately enhanced academic freedom.

And even challenging claims like misconduct could be handled respectfully and courteously, Mr Walker argued, citing the way court proceedings were conducted for serious criminal charges.

The interplay between some complex legal documents will determine the winner when the High Court delivers its judgment, which is expected later this year.

Whatever they decide will be a ruling about one academic at one university, but with the federal government mulling further measures to protect free speech at universities, it could guide a larger change.