Do not be fooled by the anodyne name, the government’s safeguard mechanism, outlined in draft form by Chris Bowen on Tuesday, is the tent pole that holds up its entire climate policy.

And tethered to it is the government’s effort to rebrand Australia as an activist global player on climate, which in turn is central to its foreign policy.

Its domestic credibility is at stake too. Crucial to Labor’s victory was the fragile truce it managed to secure in the climate wars, winning (guarded) support for its climate policies from business and industry groups as well as key environment advocates. 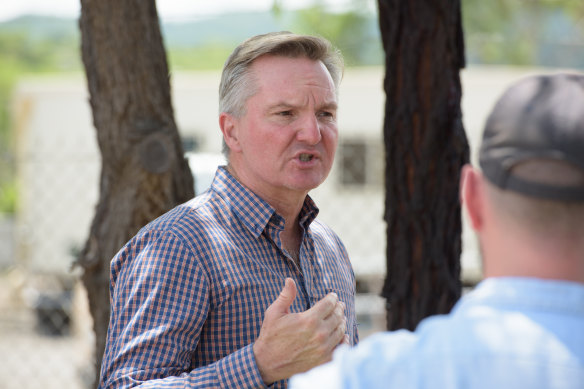 Minister for Climate Change and Energy Chris Bowen at a Rio Tinto refinery in Gladstone on Tuesday. Credit:Mike Richards

Economists broadly agree that the simplest way to drive down emissions is via a carbon tax because, as the IMF notes, they can easily be piggybacked on existing fuel taxes, and flow through to energy prices, prompting reductions in fossil fuel use.

This explains why the Gillard government was drawn to introduce a carbon tax despite its earlier promises not to do so.

As Gillard learned, taxes are unpopular and easy to attack. Years of combat over climate has made such a policy untenable in this country.

This is why Albanese’s government has chosen instead to update a policy first advanced by the Coalition in 2016.

Under the mechanism, the 215 largest carbon-polluting facilities in the country – those that emitted more than 100,000 tonnes per year – would be identified and required to meet an emissions baseline.

Polluters that failed to meet the new standards would face penalties, including requirements to offset their emissions over the baseline by buying carbon credits.

Over time the baselines would lower and with them, Australian industrial carbon pollution.

In practice though the scheme did not work. According to its critics, such as the Australian Conservation Foundation, this was because the baselines were set too high in the first place and the scheme was poorly policed.

As a result, not enough pressure was brought to bear on polluters to invest in cleaner technology. While carbon reductions were made in energy production, they continued to grow in industry.

Bowen is gambling that the policy can be improved with more realistic baselines and more effective regulation.

Funding is being provided to help industry transition to cleaner technology and baselines will be designed to support facilities exposed to international competitors that do not have to meet carbon constraints.

According to Bowen the government will require 205 million tonnes of reduction between now and 2030 via the mechanism – the equivalent of removing two-thirds of the cars on Australian roads.

Doubtless he also hopes the opposition will be able to play less political mischief with a policy it designed.