By Deborah Snow and Alexandra Smith 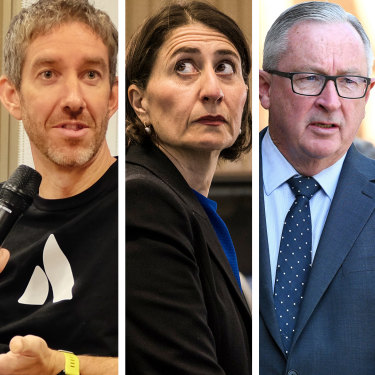 The pall of smoke from the Black Summer bushfires had barely lifted when NSW Premier Gladys Berejiklian found herself confronting the second existential crisis to loom over the state since the joyless dawn of the New Year.

Confusion reigned as state agencies struggled to make sense of the likely scale of what was to come.

“None of us knew what was happening in February,” says Berejiklian. “We were still planning on having to quadruple our hospital capacity because we thought we would end up with thousands of cases.”

What would soon become clear was that every government in the world was scrambling at the same time to secure supplies of gowns, gloves, masks and respirators – known collectively as personal protective equipment, or PPE – to protect frontline health workers.

Berejiklian took a look at what items the federal government could provide from the national stockpile set aside for emergencies. She was taken aback.

It wasn’t nearly enough, not even to meet the state’s needs for a week, she revealed in a lengthy interview with the Herald.

“I knew [then] we had to rely on ourselves,” she says. In her view, NSW was the most exposed state to COVID-19, given Sydney’s status as the prime international gateway for the country.

“I felt I was responsible for 8 million citizens, I had to step up and make sure they were covered. If I relied on the national strategy with procurement, how would I know what I would get?"

Health Minister Brad Hazzard shared Berejiklian’s concerns. “We had no idea what we would get. By the end, we all became experts in NSW in procurement from glove sizes to ventilators,” he says. 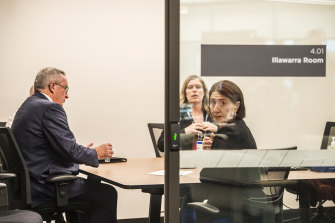 Chant had been in daily meetings since the end of January with other top medical and health officers from around the country, in a then little-known forum called the Australian Health Protection Principal Committee (or AHPPC). It would later channel advice to Scott Morrison’s national cabinet.

The Premier also turned for advice to trusted business contacts, such as Atlassian co-founder Scott Farquhar, who fed her additional intelligence from overseas and guided her on “what questions to ask”. Another trusted source of counsel was the former head of the Sydney Olympic bid, Rod McGeoch.

Berejiklian placed Ayres, also the Minister for Investment, in charge of efforts to independently bolster the state’s supplies of PPE, regardless of the fact that the federal government was making parallel efforts. He later took on the role of overseeing hotel quarantine.

“We went to business leaders we knew who had links into the various countries where supplies were,” Berejiklian says, without divulging further details. “Quietly in the dead of night we had planes arriving from different parts of the world. It was a huge logistical exercise."

A risky one at times, too, it seems. In late November two Texan businessmen were arrested in the US over an alleged attempt to con the state government out of millions over a non-existent cache of N95 respirator masks. Court documents state the plot was thwarted by the intervention of the US Secret Service before any money was handed over, though NSW sources insist their officials had already picked up on the scam. 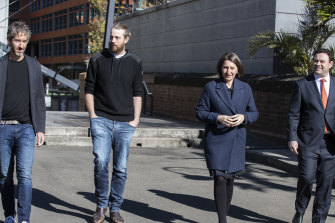 In operational terms, Berejiklian had drawn two invaluable lessons from the Black Summer. The first was the power of placing all relevant frontline agencies under one roof, reporting to a single figure in charge of overall operations. During the fires it had been Rural Fire Service boss Shane Fitzsimmons. For the battle against COVID-19 Berejiklian would appoint NSW Police Commissioner Mick Fuller as the state’s emergency operations controller. Those key agencies would base themselves at the State Emergency Operations Centre at Homebush, as they had during the fires.

It took her three weeks to convince the health bureaucracy of the worth of this model, she says.

“For three weeks I was stressing. I said unless they are all under one roof it’s not going to work. Police had to lead the logistics and the response and health would just have to focus on what they do best, which is contact tracing and the health planning. It was a different model to what the other states did. But I knew the challenge would be a million times broader than health, that it would involve compliance, logistics, a whole of government response." The health bureaucrats, she says, are grateful for that decision now.

The second lesson she took from the Black Summer was the value of fronting the cameras, day in and day out, with a trusted expert at her side. Through the fires it had been Fitzsimmons. This time it would be Chant, whose face would soon become almost as well known to the NSW public as the Premier’s own through dozens of daily 8am media conferences.

“You only get public confidence if they know what you are doing is based on expert advice,” Berejiklian told the Herald. “I felt that if I told the public everything I know, they would feel more confident in taking instruction, and following advice. I took a lot of stuff from the experience of the fires.”

She admits there have been differences of opinion among her ministers about the extent and timing of social and economic restrictions, given the harsh impact on business and jobs. She characterises these as “healthy debates”, saying she and Chant were almost always on the same page.

“I felt we were in sync,” she says. “Sometimes every single person in the room would have a different view to her or me.” 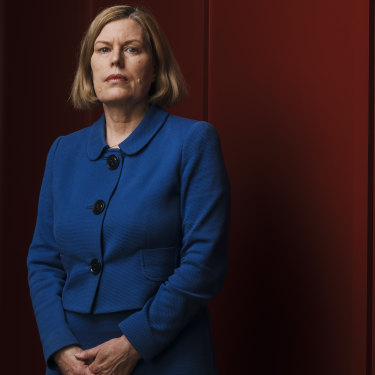 The year has had black spots. The Ruby Princess debacle, where health officials allowed passengers to disembark from a cruise ship without becoming aware that it was riddled with COVID-19, was one. Just a day later Hazzard was so worried about a repeat of the saga that he called on Defence for help. He phoned the Defence Minister Linda Reynolds at 11pm on March 20, and asked if she would give him helicopters to parachute medical teams on board ships waiting to dock. “Linda Reynolds gave an instant, ‘Yes, whatever you need we will do’.” In the end, the helicopters were not needed.

The outbreaks among patients and staff at two aged care homes, Dorothy Henderson Lodge and Newmarch House, were another low point for the state, although NSW was eager to point out that aged care homes were the responsibility of the federal government.

Meanwhile, as Berejiklian was facing her most challenging professional year, her personal life was thrust into the spotlight. For a deeply private person, the revelations of her liaison with disgraced former MP Daryl Maguire stunned her closest friends and family.

Then she made the blithe admission of pork barrelling in the administration of a council grants scheme which saw the bulk of money going to Coalition-held seats as well as a lapse in judgment when she ordered a COVID test for herself after losing her voice, yet failed to isolate for the two hours it took to get a negative result. Much as she’s tried to play this down, she stood condemned in the court of public opinion for applying a different standard to herself than she has repeatedly asked of the NSW citizenry.

Yet despite her personal travails, little can take the sheen off the fact that while Victoria’s second wave galloped away uncontrollably through the winter, NSW has – thus far – stayed on top of its spot outbreaks. 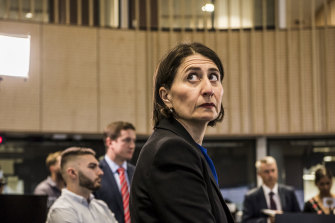 NSW Health’s regime of contact tracing, hotel quarantine, the public health response and the use of digital tools to manage the pandemic have, by national and most world standards, been exemplary. (They were put to the test again at the weekend, after a female cleaner who'd been working at a Darling Harbour quarantine hotel tested positive).

Some of the state’s success in contact tracing is owed to years of investment by previous state administrations in public health. Local public health units were steadily built up from the early 1990s, a model which provides critical eyes and ears on the ground when localised outbreaks occur – and a marked difference from Victoria's highly centralised system.

NSW Police – and the defence force – were also heavily involved in the hotel quarantine response, another significant difference from the Victorian government's initial approach.

Chant beefed up her ranks of contact tracers by recruiting heavily from staff laid off by airlines, and pulling in personnel from other parts of the state public service.

Genomic testing of the many different strains of the virus, with their subtle variations, has been a key tool in linking “clusters” of infection, making it easier to track down and prevent unchecked transmission of the virus through the community, Chant says.

Among the most serious was the outbreak that began with a cluster of cases linked to the Crossroads Hotel in south-western Sydney in early July, seeded by a man who had travelled from Melbourne to Sydney then joined colleagues for a drink at the pub on July 3.

Chant has previously singled out for praise the eagle-eyed vigilance of a junior physician at Liverpool Hospital, whose decision to order a COVID-19 test for an unexplained fever – even though his patient had not presented with a respiratory complaint – gave the state’s contact tracers a vital opportunity to catch the outbreak early. Even so, it ran to more than 60 cases. 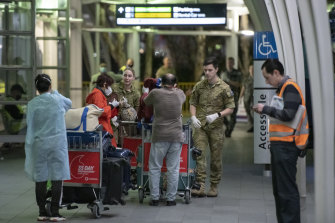 Passengers are assisted at Sydney International Airport before being transported to a hotel for quarantine.Credit:Wolter Peeters

Prime Minister Scott Morrison has held NSW up as the gold standard for other states to follow. Chant says this makes her personally uncomfortable.

“This is about the team," she says. “For me this is a sort of acknowledgment of the community, how governments can work together, and the strengths of our healthcare system, and I think that's what gives me joy."

She won't divulge whether there's a threshold number of COVID-19 infections in the community that would trigger a fresh round of social restrictions in NSW. “I hope that remains an abstract issue,” she says. “We are really aiming for no community transmission.”

Asked if she’s feeling confident now, Berejiklian replies: “No, it's a daily struggle … I think there will be some type of vaccine early next year, but it will have limited distribution. The vast majority of the population will still have to live in a COVID-safe way.” What she is “100 per cent comfortable” with, she says, is the NSW strategy.

“I feel that we know as much as anybody else in the world.”

You can read more stories in the series here.

Get our Coronavirus Update newsletter

Stay across the news you need to know related to the pandemic. Sent Monday and Thursday. Sign up here.