‘Lazy’ couple who spend £1,000 on food a month for their family of four are slammed as ‘disgustingly wasteful’ by viewers on How To Save A Grand in 24 Hours

A couple were slammed as ‘lazy’ and ‘wasteful’ by How To Save A Grand in 24 Hours viewers after splashing out on £1,000 on food each month.

Aaron and Kayleigh Reid, from London, appeared on the programme last night and said they were struggling to manage their finances after the Covid-19 pandemic left them living off one income.

With the help of Channel 4’s team of chef Gary Usher, DIY expert Eve Humphreys and cleaning wonder Peachy Clean, they ditched their £230 takeaway habit and began planning meals in an attempt to cut down their enormous £700 supermarket shopping bill.

But viewers were baffled by the couple’s spending habits, with one commenting: ‘£1,000 a month on food. For adults, two toddlers. Disgusting wasteful pair.’ 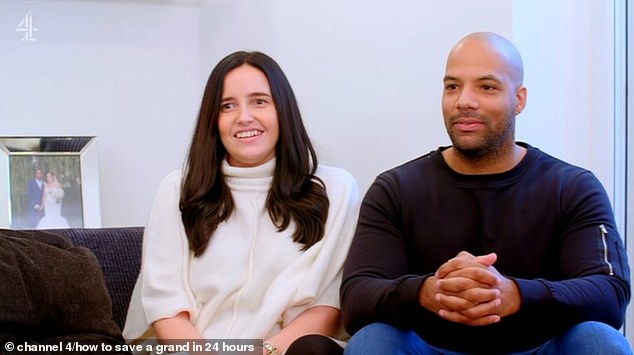 Aaron and Kayleigh Reid, from London, were slammed by How To Save A Grand viewers last night after  splashing out on £1,000 on food and £980 on online shopping each month

Another wrote: ‘Just pure laziness. Imagine being on TV for this. £1,000 on food a month…they need a money saving expert, not a TV show. Embarrassing!’

At the start of the programme, the couple said the Covid-19 pandemic had made them realise they needed to reevaluate their spending.

Aaron said: ‘At the end of the day, I’ve got no choice. You can either go with it or you let it get on top of you.’ 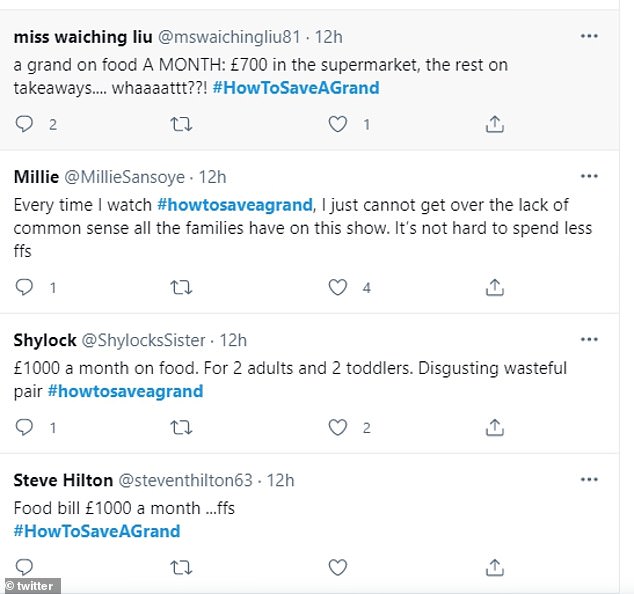 Many viewers were baffled by the couple’s spending habits, with some declaring they were ‘wasteful’

But despite that, the couple continued spending money as if they were bringing home two incomes.

Since having her second baby three months ago, Kayleigh had gotten excited about her post-baby body and splashed out on online shopping.

They had received so many packages, they’d struck up a friendship with the courier driver.

And their spending didn’t stop at online shopping. The family were not meal planners and splash out a whopping £1,000 on food each month. 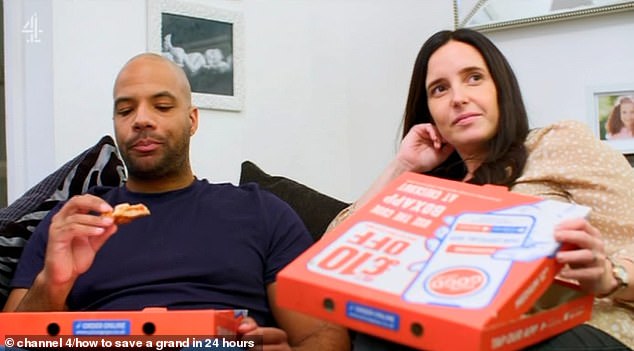 Their three takeaways a week saw the family spend £230 each month on top of their huge £700 supermarket shop.

Host Anna Richardson baffled the couple when she told them that the average for a family was £400.

Meanwhile she said the couple also spent £980 per month on online shopping.

She said they needed to be ‘a lot more savvier’ with their shopping habits. 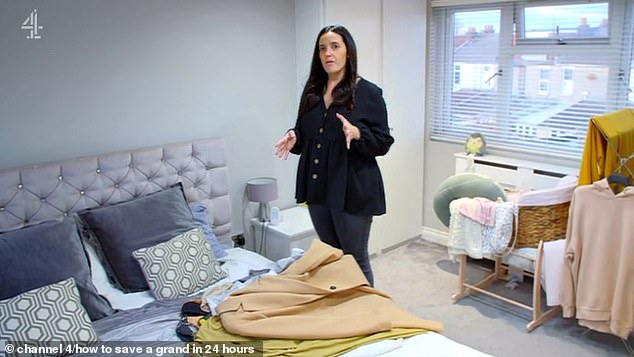 The couple confessed they didn’t enjoy cooking, and had a tendency to  re-order the same foods when they shopped online.

Kayleigh said: ‘I know I’m not the best at checking what we have before ordering more.’

This caused Aaron and Kayleigh to be more tempted by takeaways due to the overwhelming amount of food in their cupboards.

Chef Gary calculated the family were spending a whopping £250 a year on packet microwave rice alone. 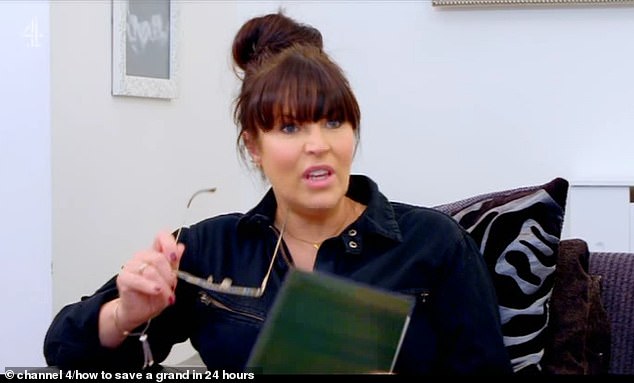 Instead, he suggested they buy food like rice or spices in bulk in order to save money.

Meanwhile he also said the couple should buy frozen vegetables instead of fresh because it can tend to be cheaper and just as nutritious.

At the end of the programme, Anna said the tweaks had saved the family around £1,300 per month, including reducing their food bill by £668 each month.

Kayleigh said: ‘If just shows when you look at it and break it down, how a few small actions can make a difference.’ 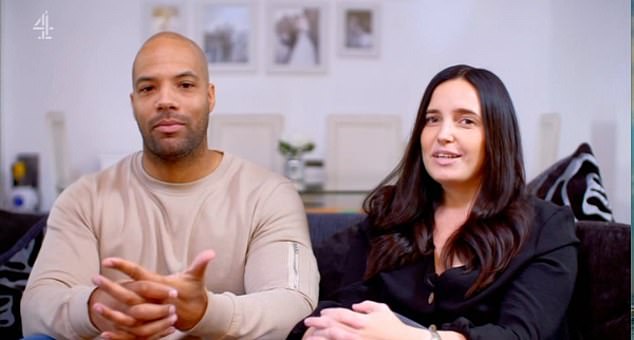 At the end of the programme, Anna said the tweaks had saved the family around £1,300 per month, including reducing their food bill by £668 each month

However viewers confessed they were baffled by the couple’s spending habits.

One person wrote: ‘Anyone who spends £1k on luxury online shopping and £1k a on food a month doesn’t need featuring…absolutely disgraceful waste of money in the couple featured tonight when people are really struggling have to to go to foodbanks.’

‘Every time I watch #HowtoSaveAGrand, I just cannot get over the lack of common sense all the families have on this show,’ a third commented. ‘It’s not hard to spend less ffs.’