Elf on the Shelf may be Santa’s little spy that became a holiday tradition much to the chagrin of parents around the world — but it appears he’s here to stay. Opinions about Elfy are pretty polarizing; you either love it and think it’s festive and fun, or you hate it and think it’s creepy. Either way, Elf on the Shelf is only gaining popularity, so it looks like it’s sticking around — until Christmas Eve, that is. On Christmas Eve, of course, said elf has fulfilled his duty of filling in Santa on who’s naughty and who’s nice. So he bids the kids adieu ’til next year and goes back to the North Pole (aka gets put in a box in the attic).

It can be fun to finish the build-up to Christmas with an Elf on the Shelf finale — something fun and super easy — without being over-the-top or requiring too much detailed execution. Because let’s be real: Parents have got enough going on Christmas Eve without worrying about an elaborate elf sendoff.

Looking for some quick and painless ways to say goodbye to the elf and give your kids one last holiday hunt for the little lad in red? Say no more. We’ve got you covered, so don’t feel like you’ve already burned through all the best elf ideas on the days leading up to Christmas. After all, Christmas is the most wonderful time of the year, so finish the year out with an Elf on the Shelf goodbye your kiddos will be sure to remember — and save the rest of these ideas for next year. 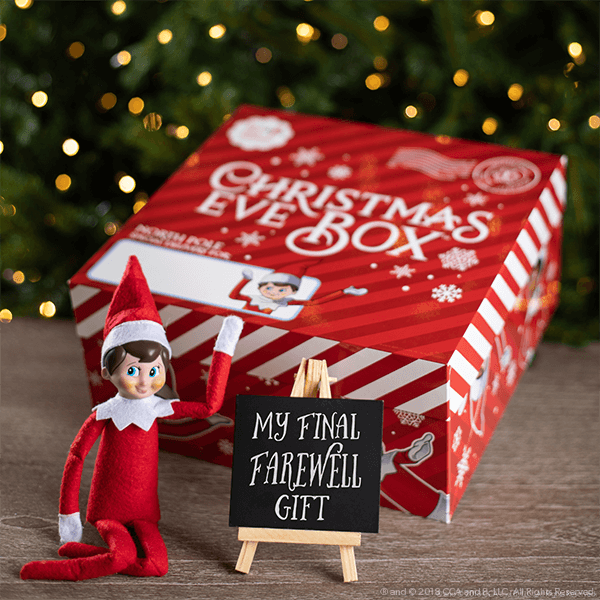 Have your elf give a final gift before heading home: a Christmas Eve box, filled with a holiday movie, popcorn, some Christmas PJs, and hot cocoa packets. The gift of a cozy evening with the family in front of the fire, watching a holiday movie — what could be a better goodbye? 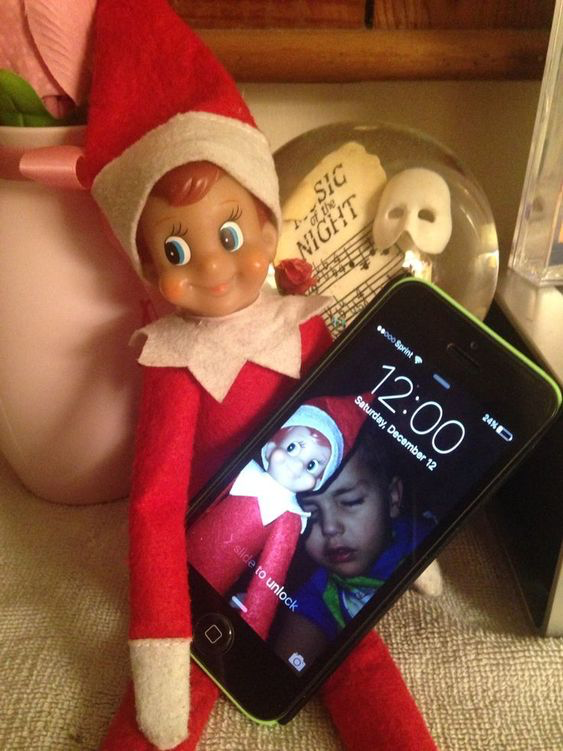 Snap a sweet pic of your elf with your sleeping kids, and make that picture the background on your phone. When they wake up in the morning, tell them you discovered that your elf had gone back to the North Pole, but not before taking one last selfie. If you can get away with it without waking up your tots, perhaps your naughty elf can do one last prank and draw some mustaches on your sleeping angels. Maybe stick an elf hand up their nose. Just a suggestion. 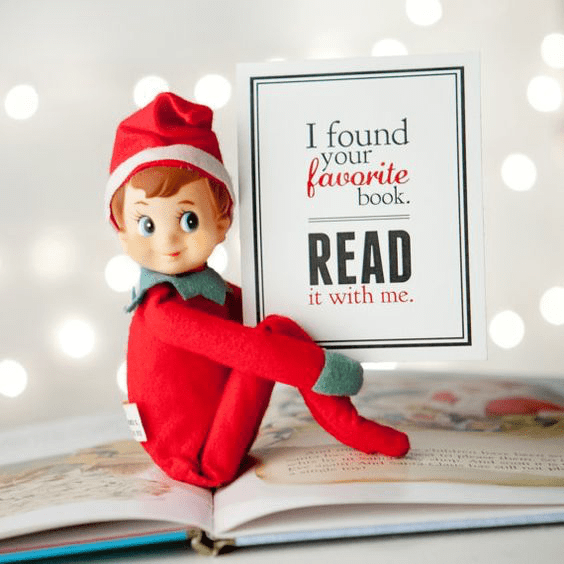 Have your elf leave behind a new Christmas book before he jets off to the North Pole, and your kids and you can read it together before bed. Leave a sweet message inside the front cover, and each year your kids will have a new literary treasure to add to their Christmas collection. 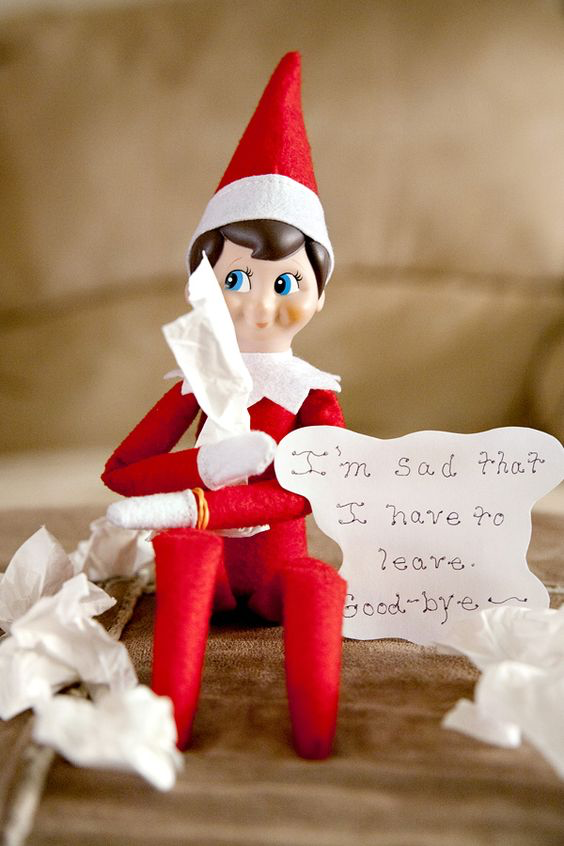 Leave your elf in a pile of crumpled-up tissues to let your kids know that despite the smile painted on their elf’s face, this guy is actually heartbroken to have to go home. 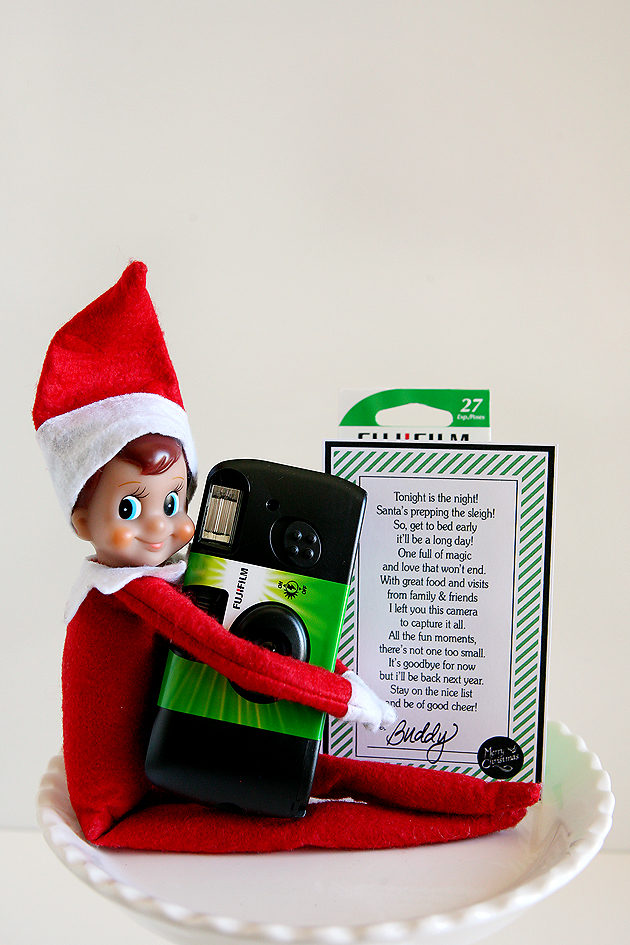 Leave a camera behind for your kiddos to document Christmas morning and send the photos to their elf; just put their elf’s name on an envelope with Grandma’s address (use a disposable camera so you don’t wind up with your phone’s camera roll full of 2,948 pictures of crumpled-up wrapping paper). Download this cute free printable elf goodbye letter at Eighteen25. 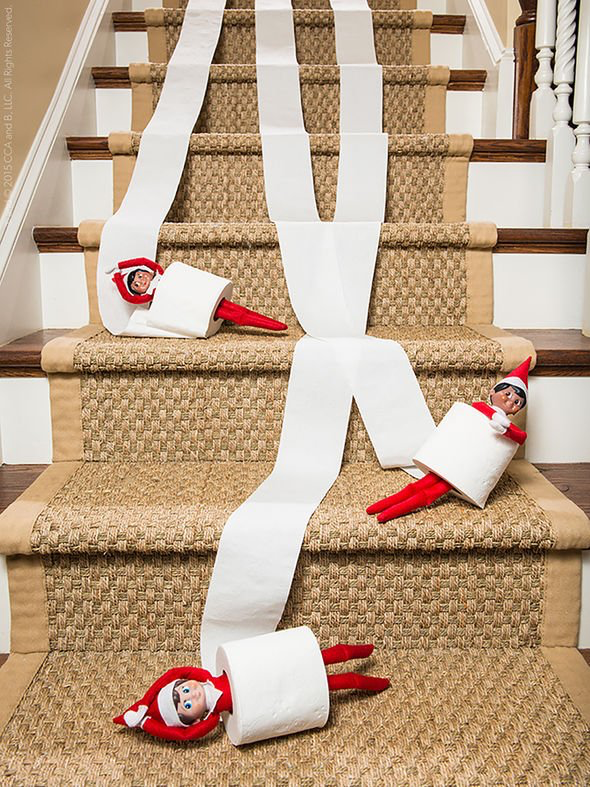 If you’ve got multiple elves and want to keep their departure lighthearted, leave a note for your kids saying that your elves have gotten a little out of control and needed to go back to the North Pole for a time-out before their Christmas duties. If your elves have been particularly naughty during the countdown to Christmas, the whole family can laugh fondly at memories of their antics — so their aren’t tears from the littles at the elves’ departure.

A version of this story was originally published in December 2019.

These Costco kid gifts are sure to bring some holiday cheer.