More than a year after her much Instagrammed relationship with American beer heir Jacob Busch came to a crashing end, Rebel Wilson has again used her medium of choice to announce she is ensconced in a new relationship, with a woman.

While Wilson ignored PS’s requests for comment about the new relationship earlier this week, just hours after being sent questions on Thursday morning she opted to make the revelations herself on social media, posting a shot with her new partner, Los Angeles-based tracksuit designer Ramona Agruma.

Last month Wilson confirmed she was in a new relationship, but did not say who her new paramour was and referred to them only as “them”. Wilson said it was someone she had been introduced to through a mutual friend.

Early on Friday morning Wilson wrote on Instagram: “I thought I was searching for a Disney Prince .., but maybe what I really needed all this time was a Disney Princess.”

Early conjecture suggested Wilson’s new partner was Australian tennis player Matt Reid, though the pair have not been seen together publicly for over six months, after turning up at last year’s AACTAs in Sydney.

Wilson’s Hollywood circle has been talking about the new relationship openly for some time. The new couple were introduced by their mutual friend, Australian actor Hugh Sheridan, who recently ended his own same sex engagement and has publicly refused to be defined by labels such as “gay” or “bisexual”. 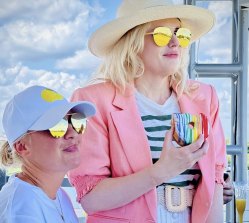 Further investigation reveals Wilson and Agruma, who designs a range of leisure wear under the label Lemon Limon, attended the World Pride Polo carnival in Florida just over a week ago, an exclusive event within America’s affluent gay and lesbian community. Wilson posted a photo of the pair, though did not tag Agruma. She did, however, include the hashtag #loveislove.

The women have also posted shots in matching outfits about to board a private jet, on the US snow fields, wining and dining in Beverly Hills and heading out to the exclusive post Oscars Vanity Fair party.

Neither Wilson nor Agruma responded to PS inquiries, though friends confirmed they were certainly enjoying their time together.