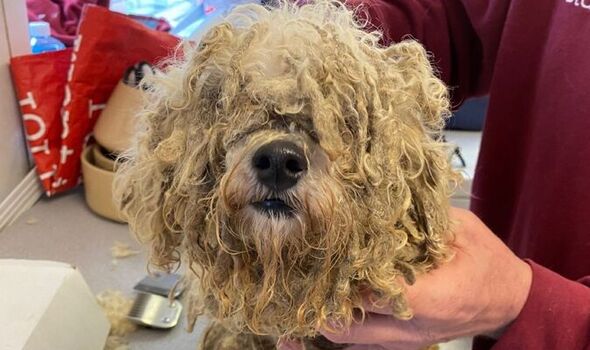 Custard Cream was one of 27 dogs and puppies who came into the care of Hope Rescue in Wales after being seized from an illegal breeder in February. The Bichon Frise was in a terrible state with overgrown matted fur, and rescuers even feared for the life of her and her unborn pup.

But Custard Cream is now unrecognisable after a haircut and lots of TLC from the charity.

She has given birth via C-section to one puppy, called Garibaldi, and the pair are doing well.

Sara Rosser, head of welfare at Hope Rescue, said the dogs rescued from the illegal breeder were in some of the worst conditions she had ever seen.

Ms Rosser said: “You never know what you’re walking into when you’re asked to come and collect dogs but the conditions we came up against during this rescue were absolutely terrible and unacceptable.

“The dogs were in an awful state, their fur matted and caked in dirt, some to the point of not being able to see or walk comfortably.”

The dogs and puppies underwent vet checks and grooms before being moved to loving foster homes.

Their numbers have almost doubled to 45 after all the pregnant dogs gave birth.

The charity said it was an example of low-welfare breeding to maximise profits.

Hope Rescue was contacted by the local authority and Regional Trading Standards Investigation Team and the animals were signed over this week following an initial court hearing.

The charity estimates the total cost of preparing them for rehoming, including neutering, to be £15,000.

It comes at a time when it is facing high demand with people giving up dogs following the lockdown puppy boom and amid the cost of living crisis.