Australians with fiances stuck overseas have been offered some hope of reunion, with Home Affairs secretary Mike Pezzullo working on advice to government about how to get them into the country.

Sydney man Gordon Chan has already given up on being able to bring his fiancee, Svetlana Chernykh, to Australia to get married, instead putting his life and high-paying job on hold to go and live with her in Albania in the hopes of starting a family. 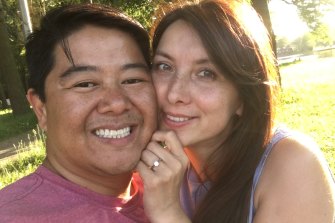 Sydney man Gordon Chan with his fiancee, Svetlana Chernykh, who has a visa to come to Australia to marry Mr Chan but has been repeatedly denied travel exemptions.Credit:

There are now 1957 prospective marriage visa holders outside Australia, data from the Department of Home Affairs shows. This has more than tripled since March.

The department is also processing a further 4614 prospective marriage visa applications from people outside Australia.

Mr Chan and Ms Chernykh met in 2018 in a chance circumstance that likens to winning the lottery: he joined a friend at the last minute at the World Cup in Russia, one of the few English-speaking Russians he met was Ms Chernykh, and they hit it off.

“When you add it all up, it’s basically I won the lottery ticket of love,” he says.

They visited each other over the next 18 months but haven’t been able to be together since Ms Chernykh left Australia in March 2020, two days before the international border closed.

Ms Chernykh has been granted a prospective marriage visa – which costs close to $8000 – but has had several applications for a travel exemption to return to the country denied.

Mr Chan said the situation was incredibly frustrating and left them feeling like they had jumped through all the immigration hoops only to get “this visa that in essence is a worthless piece of paper”.

“I’m 40, she’s 40, we want to start a family. We love each other but we can’t start a family because we were separated this whole time,” Mr Chan said.

“It’s just inhumane to keep people apart like this.” 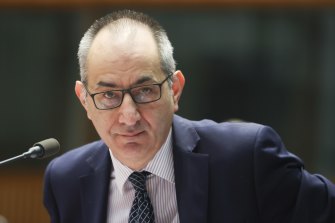 Home Affairs secretary Mike Pezzullo is working on options to give to the government to help Australians with fiances stranded overseas.Credit:Alex Ellinghausen

At present, people on prospective marriage visas are not considered immediate family; only spouses, de facto partners and children can get automatic travel exemptions. When the visa is granted, the partner outside Australia usually has a year to enter the country.

But Mr Pezzullo said the department was conscious of the plight of partners separated and that the medical advice and modelling indicated the pandemic had a way to go yet.

“We don’t want to deny people their right, given that … they are the receivers of a lawful entitlement to be united with their prospective marriage partner,” he told Greens senator Nick McKim in a committee hearing on Friday.

“I can assure you that options are being explored.”

The advice to the minister is likely to include offering extensions on visas or an assurance to visa holders that “the clock won’t just run out on them”, along with consideration by Australian Border Force as to whether fiances should be added to the categories for automatic exemptions.

“I don’t think we’re at a point yet of coming to a concluded view about whether it should be an auto-exemption but it might be a case of just working through those [visas] to make sure that people don’t suffer as a consequence of the ongoing nature of the pandemic, the restrictions in quarantine places, lack of availability of flights and so on and so forth,” Mr Pezzullo said.

Mr Chan decided six weeks ago to take matters into his own hands, taking a leave of absence from his job with a big four accounting firm and heading overseas to be with Ms Chernykh.

“I’ve basically thrown my career in the bin to go overseas to live to be with a woman I love with just my life savings; life savings that I was going to use to buy a house, to start a family,” he said.

“I just don’t have any other choice. It’s this or wander the world alone for the rest of my life.”