After her stunning turn in the biopic Judy, it is clear Renée Zellweger has fine-tuned the art of mimicry. Of her performance in the new crime drama The Thing About Pam, producer Jenny Klein said: “Seeing Renée was surreal and also a little scary. It wasn’t just the physical embodiment, it was the way Pam talks, her mannerisms, the way she talks with her hands. It was the whole package.”

For the 53-year-old actress, best known for star turns in the films Nurse Betty, Bridget Jones’s Diary (and its two sequels) and Miss Potter, the transformation is more complex. In full costume, looking into the mirror, Zellweger says it is not immediately clear, even to her, who is staring back. 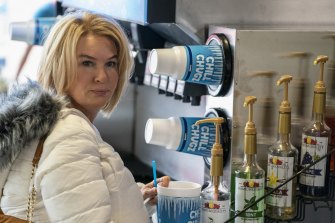 Renée Zellweger as Pam Hupp in The Thing About Pam. Credit:Skip Bolen / NBC

“It’s both, and the little titbits that I can see of myself indicate to me that we haven’t quite done something right that day,” Zellweger says. “So it’s a measure of correctness more than it is about whether I feel like it’s recognisable. Being immersed makes it much easier to sort of transcend your experiences, the reality to tell the story that you intend to. So, I love it.”

In her last film, Judy, she transformed herself into the icon Judy Garland, a performance which won wide acclaim.

“You collect all these pieces of information, right? From life stories and images and anecdotes and visuals, and maybe affectations and habits, and you live within them,” Zellweger says. “You surround yourself with them, and you’re living within this sort of encapsulation of personality, if you will. And you can mine from those things at any moment.

“And there is this level of understanding or familiarity or empathy that you want to reach when you’re in that moment, in telling whatever particular piece of the story you’re trying to tell,” Zellweger adds. “The joy of it is understanding that person’s experience in that moment. That’s the goal because that’s the reward as an actor.” 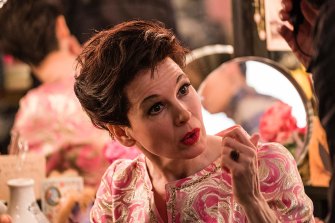 Zellweger as Judy Garland in Judy was extraordinary.

The project is a rarity for Zellweger, who seems to have largely resisted the migration from motion pictures to television. Aside from the 2019 Netflix series What/If, Zellweger’s last substantive television credit is 1993’s Murder in the Heartland. She has instead almost exclusively worked in film, notably the Bridget Jones films and, more recently, Here and Now, The Whole Truth and Judy.

“I’d never thought about that before, [that I was] slow coming to TV,” she says. “I think it was just circumstance, I think I was just intentionally not busy and then really busy. And I think that’s just it, but [regardless of the medium] good is good. Think about some of the fantastic television programs that were on the 90s. I guess if any of those had come my way, it might have been a different decision. I don’t know.”

One central thread that mattered to Zellweger was the project’s faithfulness to the public record, and also to its source material, a series of Dateline television reports and an original podcast, The Thing About Pam, produced by Dateline’s Keith Morrison.

“I wanted to play the person represented in the podcast and in the public record, I didn’t want to deviate from that.”

“We did our best to stick to the facts of the public record and to what was presented by Dateline in both the podcast and the program. We stuck to the book, so to speak,” Zellweger says. “There are always, I guess, creative liberties that are taken from timing; you condense certain things and that the timeline gets a little bit moved. And sometimes one character represents a few.

“But in our case, I think we were pretty straight, and we had to be for legal reasons because this is an ongoing case that is not resolved. So there’s a different kind of responsibility that comes with telling a story like this one. License is not exactly something that flourishes in an experience like this.”

For the project, Zellweger says she focused on the script and the podcast. “What’s on the page is essential because you can only say so much in between the lines. What’s between the lines is also crucial obviously, but every resource is invaluable.

“So they were essential tools,” she says. “I watched [the doco] and listened to [the podcast] all the time. Just to form habits, for little gestures, how she is in whatever way, she’s animated, how she carries herself, how she articulates, what’s her inflection. Her gestures and manner.” 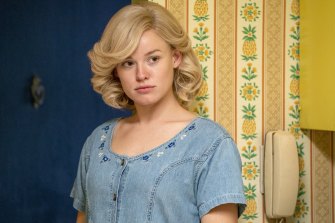 What she did not do was meet Hupp herself. (Hupp is presently in Chillicothe Correctional Centre, in the US state of Missouri, serving a sentence of life without parole.) I point out to her that her co-star Josh Duhamel met his real life counterpart, for example, and the two became friends. But no meeting was offered to her and Zellweger did not request one.

“It didn’t occur to me that would be that would be useful or correct,” Zellweger says. “I wanted to play the person represented in the podcast and in the public record, I didn’t want to deviate from that. I felt that in some way, I don’t know that, I might compromise it [by meeting with Hupp].

“I just wanted to be respectful. And it felt that if I relied on what was there and what she herself had presented as the narrative and the facts then I would do no harm,” Zellweger adds.

How people will react to her in the role, she cannot say. “After I did Dorothy Boyd in Jerry Maguire, I got hugged a lot by strangers. And with Bridget Jones, there was an expectation [from people, when meeting her] about my physicality. But I am not sure about this.

“There is a certain energy that you take in the moment when you’re telling a story, just because certain things become habits. The way you carry yourself becomes a habit, the way you communicate becomes a habit,” she says. “People certainly react to that subconsciously. But I don’t guess that people’s perceptions are any of my business.”

The Thing About Pam is on 9Now. Nine is the owner of this masthead.