Chris Van Dusen doesn't describe himself as an avid romance reader. "I've dabbled," he said in a recent interview. "I wouldn't say that I have romance books lining my bookshelf."

But as the creator of the new Netflix series Bridgerton, a courtship tale set in Regency England and executive produced by Shonda Rhimes, he joins a curiously exclusive club — the men and women bringing popular romance novels to television.

But even as networks and streaming services slaver over intellectual property with prearranged fan bases, few mass-market romance novels have found their way to screens. Character-driven and story rich, they would seem to have a lot of what television wants. But showrunners have played hard to get. 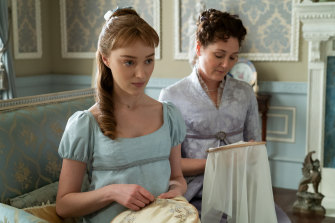 When romance novels are adapted, they typically arrive on less prestigious channels, like Hallmark, say, or as low-budget made-for-cable-or-network movies. The elevation of romance to platforms like Netflix, which has a burgeoning interest in romance series (Sweet Magnolias and Virgin River), or Starz, which airs Outlander, a time-jumping, country-hopping epic based on the book series by Diana Gabaldon, is rare. 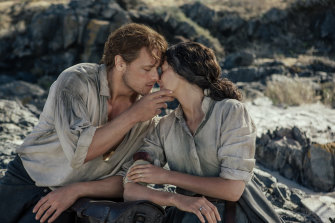 A love for the ages: Jamie Fraser (Sam Heughan) and Claire Randall (Caitriona Balfe) in Outlander.Credit:Starz

What makes a piece of prose fiction a romance novel? Romance Writers of America describes it, broadly, as having two necessary elements: "a central love story and an emotionally satisfying and optimistic ending."

Some scholars date romance literature to a handful of second century Greek works, while others start the clock at Samuel Richardson's Pamela, published in 1740 and often recognised as the first novel of any kind in English, or at Jane Austen's Pride and Prejudice, published in 1813. 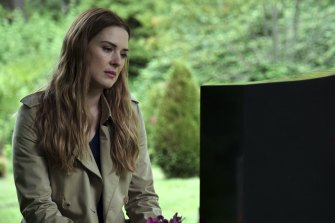 Other forms of genre fiction, like the detective novel or the space opera, have achieved mainstream respect, but the reputation of the romance novel and its writers languishes. Romance novels are rarely reviewed in major news outlets; their authors are infrequently profiled. Why is a genre best known for happy endings and a disproportionate number of mutual orgasms so denigrated? Selinger rattled off the stereotypes that dog romance like this: "It's fluffy. It's sentimental, it's trivial. It deals with emotions and not ideas. It doesn't stand up to close reading. It doesn't challenge you."

That's not entirely untrue, especially as applies to the likes of Harlequin. But plenty of airport thrillers and sword-and-sorcery books don't offer much readerly challenge either. The real problem, many scholars who champion romance argue, is that romance remains a genre mostly written and read by women.

"Often things that are cherished by people who identify as women are treated as not quite intellectual, not quite able to withstand the scrutiny as the works that are enjoyed by men," said Jayashree Kamble, a professor of English at LaGuardia Community College.

"It teaches women to demand equal treatment, to demand orgasms," she said. "It creates the expectation that men should have emotions and show those emotions and have compassion for the people around them. In a patriarchal society, those things are not necessarily celebrated."

Then again, feminists have lodged some of the harshest criticisms of romance, arguing that it presents men as aggressive and women as submissive, that it valorises marriage as a culminating achievement, that it celebrates straight, white, able-bodied couples above others. In recent years, romance has rethought some of its conventions (particularly scenes of rape and dubious consent) and has become a more inclusive field — both in terms of who writes romances and which characters those writers depict. Still, accusations of racism, in the handling of its annual awards and its treatment of writers of colour, roiled the RWA earlier this year, leading to a change in leadership.

But like it or not, romance novels sell, just not to film or television.

"Hollywood would rather do the 48th Pride and Prejudice," said Julia Quinn, author of the Bridgerton novels. ("Don't get me wrong," she added. "I'm here for those.")

Canonized as classics, novels by Austen and the Bronte sisters have a cultural cachet and unimpeachable literary value that drugstore romance lacks. No one has ever shot Fabio for a Persuasion cover.

Leaving Austen and her ilk aside, prestige adaptations of recent romance novels are scarce, with HBO's True Blood series, based on Charlaine Harris' paranormal romance novels, probably the most high-profile of them. Still, torrid love affairs abound in series whose source material is shelved elsewhere — think of Normal People, Younger, Poldark or, creepily, You. (The line between adaptations of historical fiction, like Poldark and The Spanish Princess, and romance is often an infinitesimally fine one.) Shows like The Bachelor and The Bachelorette transpose the romance novel's conventions to reality television. 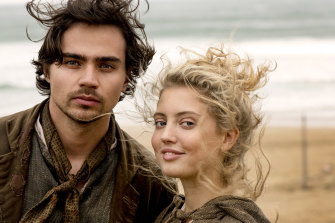 In fairness, there are often difficulties — financial and narrative — to adapting mass-market romance. Which is fitting. What's a love story without obstacles? Many romance novels, like the Outlander and Bridgerton series, are period pieces, which stretch production designs and budgets.

"It's a daunting task, when you look at what it takes to build these shows" said Karen Bailey, a senior vice president at Starz. "There's no way to do a good-looking period piece cheap."

And a novel's focus on the emotional lives of characters doesn't always translate easily to the screen.

"I always say to our writers and our directors, we can't film a thought," said Matthew Roberts, who was a showrunner for Outlander. He found that voice-over sequences left actors standing around with nothing to play against. Interior monologue has to become exterior dialogue.

Another challenge for romance adaptations today? Sex. Not all mass-market romances include explicit scenes, but many do, which forms a part of the genre's appeal. Basic cable and networks can show only so much. On other platforms, ensuring both viewer enjoyment and the actors' comfort involves care and negotiation.

"We do battles every year," Roberts said. "We spend far less time on those than we do on getting our intimate scenes, our sex scenes right."

Bridgerton, which debuted on Christmas Day, has plenty of sex. (The montage in Episode 6 alone would have Jane Austen clutching her topaz cross.) But because it is a prestige series and not an after-hours softcore show, those intimate scenes have to serve a larger purpose.

"We wouldn't have a sex scene in the show that didn't move the story forward, or that didn't move our characters forward or didn't expand on some aspect of what's happening internally for each character," Van Dusen said.

Here's one last challenge: Romances end happily. It's right there in the RWA description. And that happy ending can stand in the way of multiple seasons. That's partly why Roberts likes to classify Outlander as a love story, not a romance.

Bridgerton can continue. The Bridgerton family has eight siblings, and Quinn has written a betrothal story for each of them. Netflix tends to remain tight lipped about its viewing numbers, and executives would not comment on the success of its other romance adaptations. But if Bridgerton clearly succeeds, it invites producers to take romance more seriously.

"We know this audience exists, is thirsty and wants more," Bailey said.

And when other networks are ready, they will have hundreds of thousands of stories — some prim, some racy, some with pirates, some with werewolves — to choose from.

"I really, really hope Bridgerton paves the way for more adaptations," Quinn said. "Because there's amazing source material out there."

Find out the next TV shows, streaming series and movies to add to your must-sees. Sign up to get it every Thursday.