"Hello! I find it's always easier to start talking because there's no beep sounds or anything when it transfers. I've often sat there in silence for quite some time."

I'm on the phone to Celia Pacquola, and it's hard to imagine the award-winning comedian and actor ever sitting in silence for quite some time. 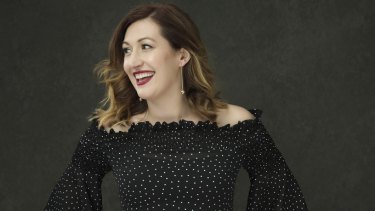 Celia Pacquola loved the idea of being able to give lost classic The Torrents “the audience it deserves”.

Over the past 13 years or so, the 36-year-old has carved an enviable career around a girl-next-door personality that can make it easy to overlook the hard work that goes into a successful and sustainable career.

Today, however, she is in Melbourne, working from home in her ugg boots and downing cups of peppermint-and-ginger tea.

"It's all very exciting, very showbiz," she says.

Pacquola has her best mate and writing partner Luke McGregor with her for company, as they get a head start on writing season four of their ABC show Rosehaven.

There is a small hiccup: it's yet to be confirmed if the charming Tasmanian comedy has a fourth season, which seems ridiculous given its popularity here and overseas, but the pair are plotting away regardless.

On the upside, the break does mean it's the first time in four years Pacquola hasn't spent a winter in Tasmania, where they film around the state's south in the Huon and Derwent valleys, clad in two layers of thermals and a fine selection of the region's best second-hand knitwear.

"Some of them are legitimately from op-shops in Tasmania," says Pacquola, "which I love, because that means there's a chance – slim – but a chance, that someone will watch our show and go, 'Holy shit! I made that. I knitted that'."

The real reason Pacquola is home, however, is because she is on a brief break between seasons of The Torrents – her first professional theatre production – which has just finished its first three-week run in Perth and opens in Sydney this week.

Set in the fictional goldfield town of Koolgalla in the 1890s, The Torrents follows spunky journalist JG Milford, whose arrival at the town's local newspaper causes much consternation – mainly because her colleagues were expecting a man.

Cue a screwball comedy covering gender equality, women's rights, the environment and the independence of the media – all topics that are as relevant today as they were in the 1890s and in 1955, when the play was written.

"The first thing that struck me when I read the script was how modern it was," she says. "I had to go back and double-check [the facts] and this was, sort of, upsetting that these are conversations that we need to be having today and how relevant this stuff is. 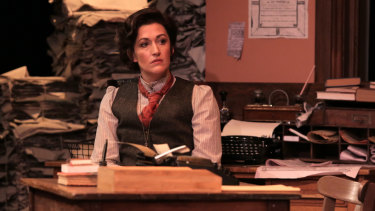 "But the good thing is that it raises a lot of issues and you can come away talking about it. Even if you disagree with it, it's kind of weird. Which is why I would tell everyone the back story of it, that it was written in 1955, because if you didn't know that and you just watched it, you would go, 'Oh, this is a satire, written now, about now, but set in the past.'"

Pacquola studied drama at university but despite one ill-begotten attempt at writing her own play – a show called Playing You ("the wankiest piece of uni student angst, but I thought it was brilliant and serious and groundbreaking and the audience thought it was a comedy") – her theatre career failed to launch.

Undeterred, she "put out into the universe for quite some time" that she wanted to do theatre but it took until last year for it to happen, when she was approached to appear in The Torrents, a co-production by Sydney Theatre Company and Perth's Black Swan State Theatre Company. Finally, the stars had aligned.

"I thought, 'Well if not this, what?,'" says Pacquola. "It was perfect for me: It's about a woman doing a job that's considered a man's job, number one, and I was like, well yep, that fits with me; it's an ensemble, it's funny, it's super feminist, it's got really big ideas."

She was also intrigued by the story behind the story – both the play and its author Oriel Gray, one of Australia's first female playwrights, had slipped from view, despite The Torrents being named in 1955 a joint winner of the prestigious Playwrights' Advisory Board Competition with Ray Lawler's Summer of the Seventeenth Doll.

From there it became a case of sliding doors – Doll went on to become one of the most popular and most staged Australian plays of all time, while The Torrents was only produced a handful of times, including for radio and TV. (There was also a 1984 musical called A Bit O'Petticoat of which, sadly, there are no reviews.)

"I loved the idea of being able to give this production the audience it deserves," says Pacquola. "So I went, all right, let's give it a shot. And if it doesn't work I'll never have to do it again".

There was also a comedian's logic at play here: "I can get material out of it."

For someone so accustomed to holding a stage – solo – in her stand-up career, opening night in Perth was an "out of body experience".

"It's so weird because I'm so used to stand-up where I acknowledge reality," she says. "I'm here, you're here – I'm telling you things and you're all listening. Whereas this is a bit more magical.

"I'm getting more comfortable with it, I guess. But I'm enjoying it quite a lot more now that we've had it in front of people a few more times. But the first one was quite full on."

Was she ever tempted to look at the audience?

"A little bit. I get a bit of relief from that, but not within the play. Which is important because it's not about me," she says. "I don't want people to go, 'That's Celia.' I really want them, if they know me as a stand-up, to watch the play and go, 'That's Celia pretending to be JG Milford.'"

Of the many things Pacquola says she has in common with Milford (the "J" is for Jenny), apart from being "both brunette, both pursuing a career that is more commonly done by a man and we can both touch type", the standout is their ability to slap down sexism with a witty aside.

When Milfford is sledged for her "specious, underhand, interfering feminine logic", she claps back that it's better than the "open, honest, manly illogic" of her male colleagues.

Pacquola, meanwhile, has the modern-day medium of Twitter, where she relishes a sharp rejoinder to the trolls that come her way, such as one who recently claimed "your [sic] not funny don't ever go on TV again". 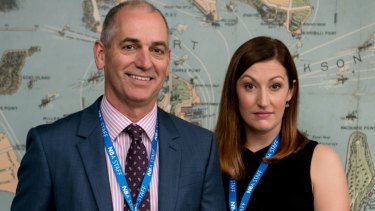 Celia Pacquola, who plays Nat, and Rob Sitch, as her harried boss Tony, in the ABC comedy Utopia. Credit:Hwa Goh

Pacquola's reply – a win for grammar nerds everywhere – was simple: "You're".

"It's so funny,' she says, laughing at the memory of it. "There were so many options when that happened. It was so delicious.

Pacquola says she's generally "really lucky" in terms of online abuse, having copped more of it in person, particularly when she did a lot of stand-up in the UK.

"I'm not particularly divisive," she says. "I get it – I get it more live, from stand-up – but I look at women in politics and think, 'Geez, you cop it' – or really outspoken women, like Clementine Ford or Van Badham, who get death threats, the most horrific stuff. I actually don't get it that much. And I'm quite lucky for that.

"Comedy shields you a little bit. It doesn't really matter what I look like or when I'm old, because I'm in comedy. I'm not judged on supermodel stuff. I get told I'm not funny, but I don't get a lot of real vicious stuff.

"But I'm also fairly quiet online. I just try to keep the social media stuff for fluff or something I've really thought about. But the problem is, if you've ever seen me on Twitter, generally speaking, I've had a wine."

Does she feel the local comedy scene is safe space for women, particularly in light of a lot of the #MeToo revelations overseas?

There's more challenges about being a woman in comedy.

"I think it's something we're talking about more," she says. "But I don't know if that's enough, if that's making change fast enough, with all of the violence and stuff that's still happening that's upsetting and awful.

"There's more challenges about being a woman in comedy. One of the main reasons is because there's less of you, you walk into a place – with a lot of groups – and if you don't see yourself there, it makes it kind of difficult."

Once The Torrents has wrapped, Pacquola would like to get back to stand-up, having missed doing a  set at the comedy festivals this year. She has a fourth season of workplace comedy Utopia starting on the ABC in August, but for now her priority is writing Rosehaven and finding the next thing that scares her.

"I like variety. I also like doing things I'm comfortable with, like Utopia," she says. "And there's still challenges in that, but I feel comfortable in that and feel confident in the character and the team, so that's lovely.

But the real challenge could lie in finding a bad guy for Pacquola to play. "I've never got to be a villain, I'd think I'd be quite terrible at it, so I feel like I should try."

Why does she think she'd be bad? 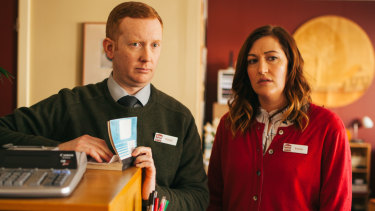 Luke McGregor and Celia Pacquola write and star in the knitwear-friendly comedy Rosehaven.

"I just think my inner need and instinct to be liked would make it really hard for me to play a deeply unlikeable character, and that's why I think it's important to give it a shot."

She is philosophical about Rosehaven's future and says she is "a big believer in things having their time".

"I'd much rather quit while ahead than wear out your welcome,' she says. "If it went for another season that would be great, but if it doesn't, I'm happy with the three seasons we did make and we would definitely put on stage the scripts that we have written on season four so far."

As for her Rosehaven partner in crime McGregor, Pacquola is still chuffed about his recent Logie win for most popular actor. She wasn't able to attend the awards ceremony on the Gold Coast because she was on stage in Perth, but the two are so close that Pacquola's two-month stint in the west was the most time they had spent apart in four years.

Have she and McGregor compared trophies yet – her three AACTA awards (for comedy in Rosehaven and Utopia and for drama with The Beautiful Lie) against his silver Logie?

"He's at my house now and just this afternoon, he picked up one of my AACTA awards and went, 'It's a lot heavier than the Logie.'

"I was like, 'Alright mate, it's not a competition', but clearly it was.'"

The Torrents is at the Sydney Opera House Drama Theatre from July 18 to August 24.