Craig Kelly was lauded as a hero, a federal MP likened his colleagues to nappies and people joked about needing a World War to distract from gender identity debates.

But the main lesson from the “Church and State” conference last weekend in Brisbane was how conservative Christian activists are attempting to grow their numbers and influence within the Coalition, and believe opposition to transgender rights will be key to their political success.

Several prominent Christian Right figures spoke of the need to be more explicit in their political activism, especially in the Liberals and Nationals, in the face of what they called an “existential” threat to the practise of Christianity.

Liberal National MP George Christensen said it was “simple maths” that getting more Christians into the Coalition would change its centre of gravity. “Politics is all about numbers,” he said. “The more people that you have in that broad church that are from the conservative Christian wing the more it’s going to lean in that direction.”

Conference convener Dave Pellowe, who once appeared in an infamous selfie with members of the neo-fascist Proud Boys group, implored the audience to join political parties. “When you add a bag of salt to a cup of water, it’s going to taste salty. It’s just a numbers game,” he said. “It’s not branch stacking, it’s participation. It’s what they’ve been doing with the Frankfurt School and the infiltration of the institutions for 50 years. It’s just turning up. And it’s our turn to turn up.” 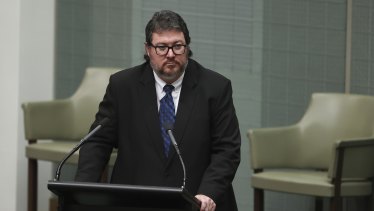 Mr Christensen also advocated Christians take a “smarter” approach to debate by self-censoring some of their agenda until they were in power. “We have got to pick the battles that we can win on in the public arena in order to get elected and be in government, and then prosecute the other battles while you’re in government,” he said.

The Dawson MP said politics was driven by volunteers and donations, and so people should be clear when donating to a politician that they expect the MP to “hold true” to their Christian values.

Martyn Iles, the head of the Australian Christian Lobby, referenced his organisation’s campaign against Victoria’s recent ban on “conversion” therapy – or practices that attempt to change or suppress someone’s sexuality or gender identity – which he said yielded 13,000 calls to MPs.

“All of a sudden I’m actually seeing people rising up more and more and more,” he said. “Give this a couple of years and we’ll be able to put such a shockwave through any Parliament in the country they won’t even know what hit them. And we’re almost at that point.”

Mr Iles called upon Christians to be more politically visible, claiming this had worked for LGBTQI activists. 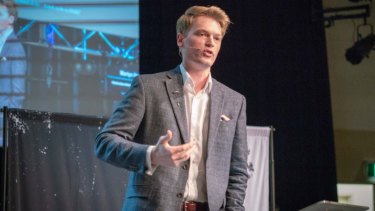 Martyn Iles called on Christians to get more involved in politics.

“[If] you meet someone from that movement, you know very quickly,” he said. “You also find them in hospitality, the arts and entertainment, in public facing positions where they’re visible all the time … retail, clothing shops and this kind of thing. They’re very, very muscular in saying ‘we’re proud of who we are and you my employer need to affirm my pride’.”

Mr Iles said Christians tended to “hide in plain sight”. “The more we are seen for who we really are, the more powerful our influence is actually going to be,” he said.

The ACL director also spoke at length about what he called “the transgender thing”, describing it as the weakest part of the LGBTQI rights movement because it was “where the lie is most fragile”.

In prepared remarks, he said governments had “given up [their] God-given duty” to “punish those who do evil and reward those who do good”, and implied that behaviour viewed by the church as sinful should be outlawed.

In a later panel discussion, Mr Iles joked that his father often said “we need a good war” to sort this out and “there’s a little bit of truth in that”, because society would not be so concerned about climate change or gender identity if we were at war with China.

Mr Pellowe then interjected: “We’re not advocating violence or revolution … today.” Mr Iles added: “Not yet, that’s down the line.”

In another conference session, Cardinal George Pell urged the audience “not to co-operate” with attempts to change “Christian language patterns” about gender, motherhood and fatherhood.

“Politely, stubbornly, persistently refuse to be silenced and refuse to give ground,” he instructed.

The Australian Christian Lobby did not respond to requests for further comment. Mr Pellowe said he had “nothing to add” and suggested buying the conference videos when available later this month.