Former president Jimmy Carter, the longest living president, has accomplished a lot in his 96 years, but his longest-running accomplishment is his marriage to former first lady Rosalynn Carter. The couple will celebrate their 75th anniversary on July 7 – marking nearly eight decades of philanthropy, travel, family and love.

The Carters started dating in 1945 when Mr. Carter, then in the U.S. Naval Academy, needed a date when he was home. His younger sister set him up with a family friend, Eleanor Rosalynn Smith – and Mr. Carter already had a crush on her, the Associated Press reports.

Since that night, the Carters went on to become a Navy family, a farming family and then first family. 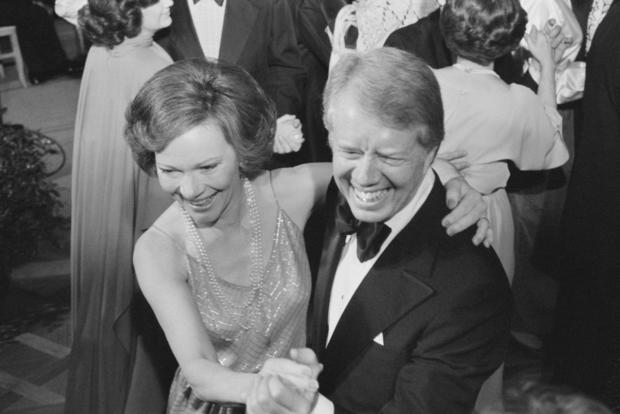 “We developed a partnership when we were working in the farm supply business, and it continued when Jimmy got involved in politics,” Mrs. Carter, 93, told the AP. “I knew more on paper about the business than he did. He would take my advice about things.”

Mr. Carter also said his wife is “much more political.”

“I love it,” she interjected. “I love campaigning. I had the best time. I was in all the states in the United States. I campaigned solid every day the last time we ran.”

When her husband was elected to president in 1977, Mrs. Carter set a standard for first ladies by working alongside her husband’s aides. She helped with key legislation, including health care and mental health.

And when he left the oval office, Mr. Carter and his wife built the Carter Center in Atlanta. The center, founded in partnership with Emory University, is committed to human rights “and the alleviation of human suffering.”

The couple is also personally involved in Habitat for Humanity and by 2018, they had put in 34 years helping make more than 4,000 homes in 14 countries.

Aside from all of their hard work, the Carters are also known for being side-by-side for 75 years – making them the longest-married presidential couple in American history, according to the AP. The former president said their marriage is “a full partnership.”

The couple have four children together and as two devout Christians, they read the Bible aloud every night.

“My biggest secret is to marry the right person if you want to have a long-lasting marriage,” Mr. Carter told the AP.

“Every day there needs to be reconciliation and communication between the two spouses,” the former president said. “We don’t go to sleep with some remaining differences between us.”

To mark their 60th anniversary in 2006, the couple planned a party in their hometown, fresh off a trip to Nicaragua.

Similarly, the Carters will host a bash in Plains, Georgia, this week to mark their 75th wedding anniversary “We have too many people invited,” Mrs. Carter told the AP with a laugh. “I’m actually praying for some turndowns and regrets.”