“I can’t stand all the bullshit. It’s really hard for me, to the point that I don’t do it, and never did it.” 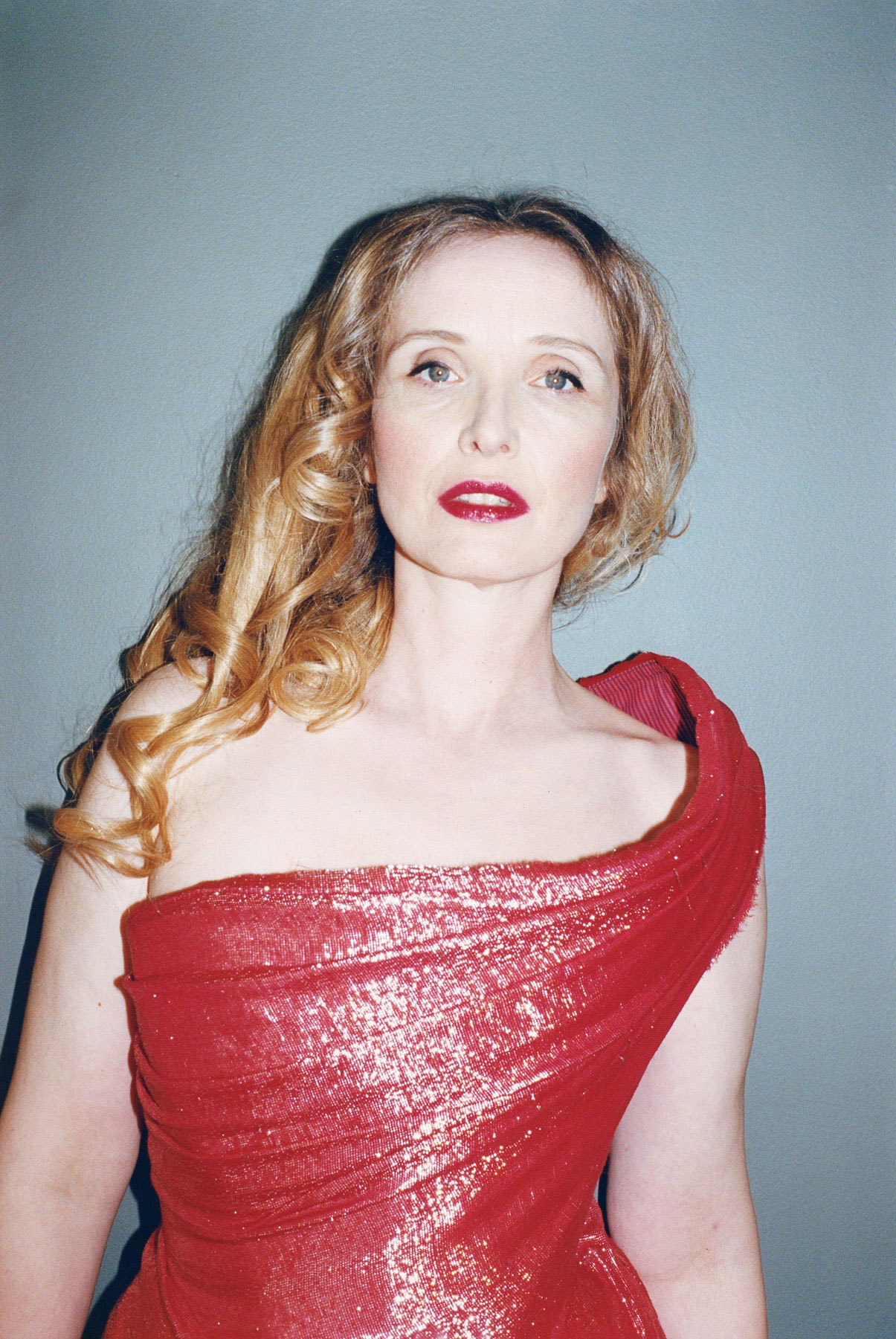 Imagine a show in which four friends in their late 40s get together to fret over their mid-life crises. No, we’re not talking about the Sex and the City reboot. In fact, Julie Delpy’s new series, On the Verge, might be something of an anti-SATC: aside from the obvious coastal contrast in location, there’s not much glitz and glam. They’re wearing hiking boots instead of Manolo Blahniks, and cocktails at the trendy bar du jour are traded for intimate dinner parties.

The four leads are each mothers to at least one son, living in (pre-pandemic) Los Angeles, and situated in various points of their careers—Justine (Delpy), for example, is a successful French chef married to an architect (Mathieu Demy, son of Jacques Demy and Agnès Varda), Anne (Elisabeth Shue) is a fashion designer who smokes just a little too much weed, and Yasmin (Sarah Jones) is a helicopter mom working on her Ph.D, while Ell (Alexia Landeau) is struggling to start her own talent management firm so she can cast her three children in commercials and make rent. In other words, they feel a little bit more like real people.

Since the late 1980s, Delpy has worked consistently in the film industry. She starred in films from directors Todd Solondz, Krzysztof Kieslowski, and Jamie Babbit. Her role opposite Ethan Hawke in Before Sunrise and its two sequels (which she wrote) arguably positioned her as a cornerstone for a film that defined Gen-X. Delpy has been an indie cinema darling, a Hollywood starlet, and a celebrity of sorts, but she doesn’t necessarily see herself that way. Here, Delpy talks about her new Netflix endeavor and reflects on the breadth of her career, choosing to become a mother after directing her first film, and why she’s never been about “the bullshit.”

When and where did you generate the idea for On the Verge?

It came in probably 2012 or 2013. My friends and I are in the same age group, and most of us ended up having kids a bit later in life, in our late 30s or early 40s. It’s a reality that if you want to have some kind of career, to combine the two is not always easy and some people are not always so understanding. I decided to have a kid after I made my first film and it was a conscious choice because I don’t think I would have been able to become a director after having a kid. I wanted to have another [baby], but it was too late, because it used to take forever for a woman to become a director.

Do you think things are different for women who are that age right now and have similar ambitions?

Things are changing, luckily! But in my generation, it was not so easy to be both. When people talk about women directors, the equation of how to be a mother is a big deal. When you’re a mother, it’s wonderful. I love it. But it’s hard to leave your kid, and some men are not as compliant at following you around. I’m not being resentful when I say that! That was just the reality 15 years ago.

So, you wrote this show from that particular experience?

I just like the idea of women that don’t necessarily put being a mother first, but then become a mother, more or less. There’s a peripheral character [in On the Verge] named Joan, and I like her because she’s the one that didn’t have a kid, and she’s fine with it. I’m interested in those women who had kids kind of in a “last call” situation. It’s a different perspective because you change your life when your life is already set in a certain way.

The characters are all mothers of sons. And in some ways, they mother their male partners, too. What was the impetus for that?

It’s my reality around me. Maybe 80 percent of my friends have boys, and just one—It’s an interesting dynamic, the mother-son relationship. It’s very strong. The husband becomes the first child. It’s especially true for the character of Anne, who has a tendency to nurture everyone. She takes care of others, possibly because her mother was so not motherly. [Laughs.] She has an unfriendly relationship with her mother so I think she became protective of friends and men.

You’ve worked in Hollywood for so long that you’ve become an insider, but you seem to not have any need for celebrity or “playing the game,” as you’ve said before. How has your relationship to celebrity or fame evolved in the last couple of years, especially during the pandemic?

It’s obvious that there are other issues to deal with. For me, it’s a no-brainer. I’m not planning on worrying about aging or celebrity stuff. I was raised by super-duper hippies that placed no value in fame. Being famous is not their idea of success.

What is your idea of success?

My idea of success is to be good at my job, to do what I love, to be a good wife, friend, mother, cook, gardener. It’s not just fame. It’s more important for me to work. Sometimes it’s unsettling in my business, especially in the past. Agents were not understanding my choices. I would write a little sequel to a crazy film. When I was writing Before Sunset, my agent at the time was freaking out because I was not focused on getting the sexy part in whatever the Hollywood film was at the time. But that’s who I am. When you’re like that from the beginning, they’re always scared that you’re complicated. I work with people as an actress and they’re like, “Oh, you’re so easy and uncomplicated!” I’m like, “Yes, what were you expecting?” The idea of a woman director is someone difficult and opinionated. I am opinionated, but not in a way that I’m going to take over someone else’s set or bug them. I will tell them what I think if I feel it’s needed, but most of the time I’ll just do what I’m told.

Do you pay attention to the celebrity trends?

I don’t know, I don’t follow the other stuff. Like, we all want to be natural now? Is it the new trend? Is the new thing to not be into fame and not put on too much makeup? I’m asking you because I don’t really know.

I think there are still some people who believe very firmly in the power of celebrity, but right now, most of us are reevaluating its importance—or lack thereof—in our lives and in culture. Especially after the last 18 months, it’s like, who cares?

Exactly. For me, not much has changed. This culture of fame is something that I never got into and tried really hard not to. The most painful part of the business is not working hard—it’s always fun for me to work, even when it’s not easy, and sometimes it’s really not easy. But the stuff about appearances is difficult. You have to do makeup and hair, and put on clothes, and look good and lose weight—all this stuff is not natural for me. I do it because people ask me to do it. I don’t like to look like shit either, but there’s something in between.

Do you feel like, by virtue of just being yourself, someone who resisted the pull of celebrity and fame, you’re setting an example for other people to do the same?

I have no idea if I’m an example. For so many years, I felt like the outcast. Everyone was asking me what was wrong with me. [Laughs.] I can’t stand all the bullshit. I don’t even know how to kiss ass. At parties, you’re supposed to go say hello, but I’m terrible at that stuff. I was doing so poorly when I was younger that if I went to a party I would get super drunk and pass out sometimes, and not say hello to anyone. [Laughs.] Now, it’s okay to be what I am. I love seeing people like Frances McDormand, who are just themselves and don’t give a shit, being successful.

You mentioned your idea of success being a holistic one—being a good writer and director, good mom, good friend, and also a good cook. In On the Verge, your character Justine is a chef. Are you a chef at home, too?

When I was thinking of what the character would do, I thought, I love the concept of cooking because it reflects a lot of things. First of all, being a woman chef is almost like being a woman director. There are very few, and it’s changing slowly, but it’s still a very misogynistic world. Cooking is a funny parallel to who I am. It’s a very loving act to make the best food you can for someone you care for—your son, your husband, other people. Not that I always cook well, but I love to cook! I don’t eat to eat, I eat to eat good food. That probably comes from my French upbringing.

What are your favorite recipes to make?

I make a very good curry, from the Réunion, an island in the Indian Ocean. I’ve mastered moussaka because my husband is Greek. I make great Italian food, my mom was Italian. And great Mexican food—I make amazing tamales. French food, I know how to make; I don’t even think about it. It’s so easy. I make an amazing pot-au-feu, which I describe in the show. I’ve also mastered cakes during the pandemic. I’ve gained a few pounds. [Laughs.]

When you look back at your decades-long career of acting, writing, and directing, do you have any professional regrets?

No. I have no regrets, career-wise. I said no to a few big films, but that’s life. I was clear very early on about my position with the whole thing in Hollywood. It was a choice, and yes, it does stop some connection with people, but I think I did a good thing. The only thing I regret is smoking in my 20s and drinking too much in my early 30s. [Laughs.]

What are you most proud of in your career?

I don’t know. Some of my favorite screenplays I haven’t made yet! I’m waiting to make those films. When I’ve directed, or when films I wrote were made, that’s what was the easiest. When I made 2 Days in Paris, I wrote it because someone told me, “You just made Before Sunset and that was successful, so just make a movie about an American guy and a French girl in Paris so that people aren’t scared to give you money.” That’s how I got my first film made—by tricking people into seeing something that was like the one before, but done differently. I’m proud of the film I did not long ago called My Zoe. I knew it wasn’t a crowd pleaser, at all. It’s the opposite. But I’m personally proud of it.