Whoopi had to tell the audience to stop booing her — before Conway got into it with fellow former Trump official and cohost Alyssa Farah Griffin.

Kellyanne Conway surely knew what she was walking into when she appeared on “The View” Tuesday morning and it didn’t take long for tensions to escalate after she popped up to promote her new book.

The conversation got off to a calm enough start, with Conway first thanking the women for having her back on the show before addressing some of the criticism she got from her own daughter and husband while working as Donald Trump’s campaign manager and Senior Counselor to the President.

But it started going a little off the rails — and even elicited boos from the audience — when Sunny Hostin brought up the “Big Lie” and the “stolen election” claims. She said she “never” lied to Trump about winning the election over Joe Biden and said she was one of the first people to tell him “he came up short.”

“It broke my heart. I wanted him to get reelected. I only wish that the people who were in charge of his 2020 campaign, with the $1.4 billion that they wasted, had won outright and overwhelmingly,” she continued. “He should have won huge. He had all these accomplishments, he’s running against a guy who’s stuck in the basement, and you’re in the middle of a pandemic. You say, ‘Folks, don’t change course.”

At that point, the audience started booing, causing Whoopi Goldberg to address the studio. “Listen, this is ‘The View’ and this is her view and she’s talking how she feels and what she knows, please don’t boo her,” said Goldberg, before Conway tried to suggest they were actually booing Biden.

“My heart is broken that Joe Biden’s president because look what’s happened. In less time than it takes to have a baby, they’ve screwed up the country,” she continued, sparking outright laughter from Goldberg.

Following a commercial break, Alyssa Farah Griffin kept hammering Conway on the “Big Lie” and the January 6, 2021 insurrection. Like Conway, Griffin also worked in the Trump administration, serving as Trump’s Director of Strategic Communications and Assistant to the President before she resigned in 2020 — and questioned why Kellyanne was still showing Trump support.

“I broke with the president ahead of January 6 when the ‘big lie’ started being shared. I resigned on December 4th and I spoke out after January 6 when I saw a violent mob assault the Capitol,” she began, as Conway asked, “Is there a question in here?”

“How do you still defend him? Do you still think he could be a good president after he tried to overturn our democracy?” Griffin then asked. Conway noted she left even earlier than Griffin — who said she only stayed on longer to “help my junior staff get jobs.”

“People should know that because I haven’t seen you since you changed,” said Conway, before Griffin cut her off. “I didn’t change. Just to be clear, I didn’t change. I swore an oath to the Constitution, not to Donald Trump,” said Griffin, before Kellyanne added, “I don’t want to argue. You get to talk here every day, I’m here as a guest.”

As Conway said she did tell people to “get out of the Capitol” on January 6th, Griffin asked again why she was still showing Trump support after the fact. “Alyssa, if you’re saying that somehow you think we’re supposed to think that you’ve seen the light and not your name in lights, that’s not fair,” Conway shot back — before Griffin called it “such a cheap shot” and said she wasn’t “answering the question” at hand. 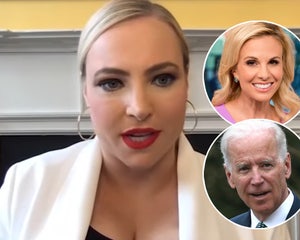 Whoopi interrupted, telling Conway to stop talking so Joy Behar and Sara Haines could get out the final questions of the interview. After side-stepping Behar, she was asked by Haines, “Do you believe that Donald Trump will run again in 2024 and if he asked you to run his campaign, would you?”

“I think that he would like to run in 2024 because he thinks there’s unfinished business. He sees that Biden is not doing a good job. I have to do the best and highest use for my family,” she answered, before talking about the number of women in Trump’s administration.

“I’m one of the handful of people in this country who talks to Mike Pence and Donald Trump regularly,” she added, as Goldberg cut her off and put an end to the segment.

On Twitter, reaction to Kellyanne’s appearance overall wasn’t positive — as many viewers wondered why the show gave her a platform at all.