Labor’s powerful environment movement is paving the way for the opposition to set a climate policy ambitious enough to outflank the federal government without imposing demands that would guarantee a punishing scare campaign from the Coalition.

The Labor Environment Action Network (LEAN) listed its requests at its annual general meeting on Sunday night as the Opposition promises to release its climate policy in coming weeks, ahead of the last two sitting weeks of the year and a federal election that is due by May. 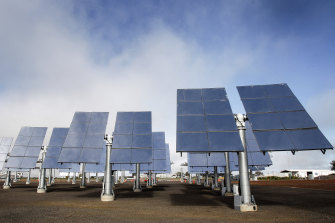 The Labor Party will release its climate policy in coming weeks. Credit:Paul Rovere

LEAN called for Labor to be “be brave and answer the call of history” while acknowledging Australia’s climate goals cannot move from “laggard to head of the pack in one fell swoop”.

Climate policy remains a risk for both major parties. Labor fears a repeat of the 2019 election scare campaign when Prime Minister Scott Morrison’s claimed it would be “economy wrecking” if former Labor leader Bill Shorten was elected with his emissions reduction target of 45 per cent by 2030.

The federal government remains committed to its international pledge under the Paris Agreement to cut emissions by 26 per cent by 2030 based on 2005 levels. However, it is also promising it will “meet and beat” this promise by achieving 35 per cent carbon cuts over the next decade, before hitting net zero in 2050.

Labor leader Anthony Albanese and climate change and energy spokesman Chris Bowen face pressure from progressive party members to pursue an ambitious climate action, following international criticism of the Morrison government’s emissions targets by allies such as the US and Britain, which have set 2030 targets of 50 per cent or more. 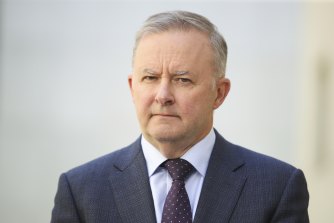 LEAN co-convener Felicity Wade said Labor could appeal to outer suburban and younger voters with a “credible” emissions reduction target for 2030 that could be as low as 40 per cent. The environment movement has not set its own emissions target and Ms Wade told members that after the federal party announced its target “LEAN’s immediate task is to help get elected”.

Mr Bowen on Sunday said he would release a detailed climate policy in coming weeks, saying a focus on renewable energy would bring regional jobs and lower power bills. He also forecast a government attack on Labor’s emissions targets.

“The one thing the climate change-denying Nationals and the alleged so-called progressive modern Liberals will unite on is a scare campaign about Labor.”

Retiring Hunter MP Joel Fitzgibbon has said Labor should “do whatever is necessary to take the heat out of the climate wars” and returning to Mr Shorten’s 2030 target of 45 per cent would be “madness”.

On Sunday he said “taking guidance from LEAN on climate change is the surest path to another election defeat”.

Ms Wade issued one particularly challenging request to the federal party, calling for it to stare down a likely scare campaign and commit to ramping up the “safeguard mechanism” created by the Coalition in 2016, which she said Labor could explain as a move to get the big end of town to pay for climate action, instead of taxpayers footing the bill.

The safeguard mechanism was created in 2016 under Coalition government, but federal Energy and Emissions Reduction Minister Angus Taylor has rejected calls to set tougher pollution limits as a “sneaky carbon tax”.

It sets a baseline for Australia’s 200 biggest industrial polluters such as smelters, mines or manufacturing plants, which combined generate about 25 per cent of the nation’s emissions. But the baselines are lax and the mechanism isn’t driving down emissions, largely because companies can request to have their pollution limits raised.

Ms Wade said: “Morrison is already practising his attack lines on his own policy. It is Orwellian. If this government can manage to make a scare campaign of its own policy, a policy that the Business Council of Australia has endorsed, we are in trouble indeed.”