Labor MPs have blasted former prime minister Paul Keating for claiming the federal opposition was complicit in the Morrison government’s surrender of its military to the United States as part of a new defence pact to build nuclear-powered submarines.

Mr Keating on Wednesday escalated his attack on the AUKUS defence partnership between Australia, the US and Britain, criticising his own side for promoting a “false representation of China’s foreign policy” by implying that Beijing presented a military threat to Australia. 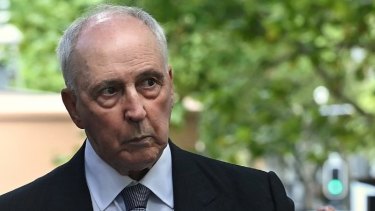 Mr Keating’s attack on the opposition’s foreign affairs spokeswoman Penny Wong, who he claimed had “neutered Labor’s traditional stance as to Australia’s right to strategic autonomy” in an opinion piece for The Sydney Morning Herald and The Age, has particularly angered federal MPs on his own side.

In a speech to the United States Studies Centre on Thursday, Senator Wong will warn Beijing is becoming “more assertive, and at times aggressive”, but will also say the debate shouldn’t be reduced to the “two fatalisms” of acquiescing to China or going to war.

Labor MP Anthony Byrne, deputy chair Parliament’s intelligence and security committee, said Mr Keating had done his party a “great disservice by attacking, in my mind, one of the best Labor parliamentarians to ever grace the floor of the Senate” in Senator Wong.

“Penny has always put the national interest first. And argues a Labor position in a forceful, elegant and nuanced way – something Paul Keating should take note of,” he said.

Mr Byrne said the analysis by Mr Keating was “like looking at life as he wants it to be, not at life as it is”.

“The fact is that we are responding to a different China to the one Keating is trying to display,” he said. “The best thing Paul could do is put the kaleidoscope down, look realistically at what’s happening and put his Montblanc pen away so that he doesn’t trivialise and mock our national security priorities, and actually writes a proper analysis of the existential threat Australia faces in a geopolitical sense.”

Labor MP Peter Khalil, a former defence intelligence officer, said Mr Keating was a “living legend” but was wrong to “so casually discount China’s aggressiveness” in areas like the South China Sea, Xinjiang and Tibet.

“Keating is wilfully blind to China’s international aggression through cyber attacks, which have caused major disruption to our university and corporate sectors,” Mr Khalil has written in an opinion piece.

“His article yesterday colourfully and rightly highlights the narrowness of the Morrison foreign and defence policy, yet Keating’s attacks reveal that like Morrison, he has fallen into the trap of binary thinking – that Australia’s only choice is between a declining US or a rising China.”

The Victorian MP also said Mr Keating was wrong to argue the AUKUS submarine deal reduced Australia’s sovereignty and operational independence by bringing the nation under the “command” of the US. “We buy equipment from all over the world, but this does not reduce our sovereignty and interoperability allows our equipment to work with those of our allies,” Mr Khalil said. “It does not tie us to their operational command.”

Mr Khalil also disagreed with Mr Keating that Australia was accelerating towards an inevitable conflict with China, saying having a stronger military posture was more likely to deter other nations from conflict and channel them towards diplomacy. 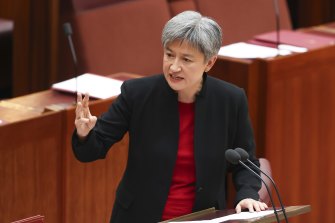 In her speech, Senator Wong will say the deal raises an “important question” about Australia’s sovereignty because there would be a higher level of technological dependence on the US.

But she will say it was important to remember AUKUS was not a formal alliance, but rather an agreement to share military technology, and the anxiety in some reactions suggested the government did not do enough “diplomatic legwork”.

“France ought to have been shown the due respect of a partner with shared Indo-Pacific interests,” she will say. “Instead, it’s been reported, that having failed to put in the work before the announcement, members of the government are now describing the French as ‘having a sook’.”

Senator Wong will also warn against relying on “unhelpful binaries” that reinforce “existing prejudices of Australia in the region or reduce our complex environment to Cold War analogies”.

“There is no scenario in which China doesn’t matter, and no responsible scenario where we can opt out of engagement,” she will say. “Equally, we know that China is becoming more assertive, and at times aggressive – which, when combined with its military modernisation program, often reduces our strategic policy debate to the two fatalisms.”