Both major parties have thrown more resources into key inner-city seats, where Labor is gaining ground, and sharpened their focus in a final push to win government.

As pre-poll voting commences on Monday, the Coalition and Labor fear a hung parliament is increasingly likely and are war-gaming a Sunday morning scenario in which neither side has won a majority of 76 seats and negotiations with an expanded crossbench commence. 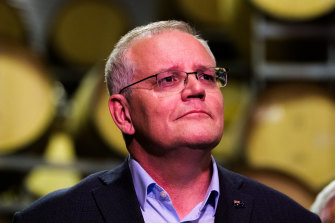 The Sun-Herald and The Sunday Age spoke to 20 MPs, including members of Cabinet and the shadow ministry, party officials in both campaign headquarters and political advisers travelling with the two leaders. All but two asked to speak anonymously, so they could discuss frankly their party’s campaign efforts.

What emerged is a consensus that the Coalition is primarily focused on winning seats in the outer suburbs and the regions, while attempting to fight off a “teal wave” of climate and integrity-focused independents in seats it has held for generations.

Labor has heightened its focus on inner-urban seats in the major cities with strategists saying the closer you got to the CBD in major cities, the more “toxic” Prime Minister Scott Morrison was with voters.

The ALP now believes it is serious chance in Liberal-held seats in the inner-city where so-called teal independents aren’t running, with Higgins in Victoria and Brisbane and even Ryan in Queensland possible gains. 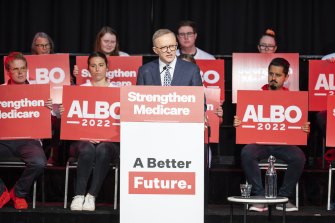 Opposition leader Anthony Albanese during a rally in Launceston, Tasmania, on Saturday.Credit:Alex Ellinghausen

Liberal strategists and MPs identified the Labor-held seats of Cowan in WA, which the prime minister has already visited three times, and McEwen (Vic) as trending their way and now on the Coalition’s list of targets.

Those seats join the NSW target seats of Gilmore and Parramatta – which the prime minister has visited five times – and Corangamite (Vic), Lingiari (NT) and Lyons (Tas).

Both sides believe, however, that few if any Queensland seats will change hands this election.

Further complicating the picture is the risk of seats including Kooyong and Goldstein in Victoria, North Sydney and Wentworth in New South Wales, and even Curtin in Western Australia falling to the Climate 200-backed teal independents. If that were to happen, both sides would almost certainly have to negotiate with an expanded cross bench.

One Liberal MP said a change of leader is not being widely discussed and is only talked about in clusters. “But there will be a big cluster of people looking for an alternative that will emerge on the Sunday morning if the situation is looking fraught and there’s an opportunity to retain government.”

But other Liberal MPs dismissed that idea, with one declaring “we can’t let them [independents] dictate directly or indirectly who our prime minister is”.

Multiple Labor strategists scoffed at the Coalition talking up outer-suburban and regional seats such as McEwen and Corangamite, saying it is desperate to present a path to victory because it knows it is dropping seats to Labor and the independents.

“They’re losing so many seats to independents they need to pretend they’re winning seats off us,” one Labor strategist said.

There are also seats that at the start of the campaign both sides had high hopes of winning, but which are now expected to be retained by the incumbent, including the Labor-held Dunkley (Vic), Lilley (Qld) and the NSW seats of Hunter and Paterson. For the Coalition, Hasluck (WA) and the Queensland seats Flynn and Longman are not expected to change hands.

Liberal MPs have been told not to encourage people to vote early because up to a quarter of voters remain undecided, a fact reflected in the most recent Resolve Political Monitor.

There is a growing belief within the Coalition that, much like in the 2004 election, undecided voters could break late – and heavily – towards the Liberal and National parties.

The Coalition has an advertising blitz planned for the final two weeks of the campaign, as 17.2 million Australians begin casting their votes.

Campaigning in Perth, Morrison warned on Saturday that independent candidates can’t be trusted and that a minority government would be ugly.

“What I’m saying is that votes for independents at a time when Australia is facing such economic challenges, such international security challenges, you do not want to have a government that has to bargain for its existence every single day, based on the latest whim of independents who have no clear policy platform.”

Both leaders have vowed not to do deals with independents to form government, however that does not preclude one of the leaders being able to form government based on a promise of confidence and supply from some members the crossbench.

At a forum in Sydney on Friday night, however, Labor legal affairs spokesman Mark Dreyfus and Liberal rising star Senator Andrew Bragg both countenanced being able to work with crossbenchers in a minority government.

Liberal MP Katie Allen, who is fighting to hold on to Higgins, said she wasn’t taking her seat for granted.

“I’ve worked hard each and every day to take care of Higgins and my constituents,” she said. “On the ground, the warm level of support for what I’ve achieved as their voice gives me confidence I will be returned.”

And Labor’s Cowan MP, Anne Aly, said her seat had always been marginal so “I’ve always worked hard in this electorate, I believe I’ve proven myself as a good representative for this area but I’ll just keep working hard for the people of Cowan”.