Anthony Doerr’s 2014 novel, the Pulitzer Prize-winning All the Light We Cannot See, was elegant, intricate, gently magical-realist and unashamedly sentimental. His follow-up, Cloud Cuckoo Land, is more of the same; a great deal more, with over 600 pages and vast ambitions. Three discrete storylines are bound together across centuries as succeeding generations become custodians of an ancient Greek story, the titular Cloud Cuckoo Land. 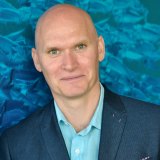 Anthony Doerr’s latest novel is an elegant, if uneven, refutation of cynicism.Credit:Ulf Andersen

In the 15th century, two teens are stranded on opposite sides of the siege of Constantinople. Anna, an apprentice seamstress/book thief/scholar of Ancient Greek, is on the inside; outside is Omeir, an oxen driver in a conquering sultan’s army who is shunned by society because of his cleft lip.

Five hundred years later, Zeno, a gentle veteran of the Korean War, lives a quiet life in small-town Idaho. Closeted and unlucky in love, his days pass peacefully working on his autodidact translation of Diogenes’ Cloud Cuckoo Land (a fictional tale attributed to real-life classical author Antonius Diogenes, whose experiments with metafiction were millennia ahead of their time) from Ancient Greek.

Elsewhere, on the fringes of both town and society, Seymour, a neurotypical boy with an affinity for nature, becomes radicalised through online propaganda. When he attempts a terrorist attack, the fates of he and Zeno smash together.

Finally, in an indeterminate future, a handful of families on the spaceship Argos flee a ruined Earth for a distant planet they hope to colonise. Their journey will take centuries; none of the first generation born on the ship will live to see humanity’s new home. Among them is Konstantine, a 14-year-old dreamer whose already circumscribed life is further shrunk when a viral outbreak causes an overprotective AI quarantine. There, she finds solace when she stumbles across a surviving copy of Cloud Cuckoo Land.

This is only a fraction of the plot, which is revealed in fragments and across time as the characters encounter Diogenes’ story. For each, the tale is a catalyst for survival that provides hope when all else is lost. In turn, each protagonist works to preserve the story for future generations, and slowly, the era-spanning threads that bind them are revealed.

The common antagonist in all eras is a disembodied sense of existential dread. The precise threat shifts with time and the villains are rarely glimpsed. The real damage is done by middle-management, soldiers and real-estate developers. Time and again, banal evil destroys the world not out of malice, but hegemony, carelessness and greed. Time and again, Cloud Cuckoo Land and hopeful youth rise again.

The resilience of the characters and the survival of Diogenes’ story reflect the thematic heart of Doerr’s novel – the message that humanity might survive any cataclysm as long as hope is kept alive. Though he doesn’t shy from the impossibility of protecting our children from harm, he unearths a surprising vein of hope.

The moral authority and emotional heft of Doerr’s talent are undeniable and he’s pulled out all the stops for this novel. Despite or perhaps because of that, it’s a bit of a mess.

Relentlessly sentimental but unevenly weighted, the sprawling story quickly grows convoluted, racing at times and sloppy with minutiae and overwrought detail in others. The time-jumps are capricious to the point of distractions – just as the reader is settling into one plot line, they are yanked into another.

Taking into account the scattered excerpts from Cloud Cuckoo Land, the story contains five points of view and six separate plot lines, each spanning many decades. The chaotic structure seems deliberate and mirrors the intergenerational struggle to safeguard the titular text as the original codex is battered by time and reassembled out of order, mis-translated, mutated.

Doerr thrives in a particular literary niche. His creations, all brave and morally upstanding youth, with abilities setting them apart from other children, strive to do good in an ethically compromised world. A morally stark worldview and a tendency towards predictable emotional arcs (the moment a loveable oxen is introduced, like Chekhov’s gun, one knows exactly where it is going) means that Doerr’s work shares similarities with the familiar tropes of young-adult fiction.

That’s not a bad thing. In fact, it’s a perfect book for younger readers – those leaving childhood behind. And also perhaps for older readers, fatigued by a couple of soul-crushing years, who need to remember what being a child is like. Barefaced emotional manipulation is only cheap when it’s done badly, and nobody does it like Doerr. I am a congenital cynic, and yet I couldn’t help but be charmed by what culminates in an elegant, if uneven, refutation of cynicism.

Cloud Cuckoo Land is a Manhattan deli-meal of a book: overstuffed, over-seasoned, dripping in schmaltz, but so delightful and moreish one has no choice but methodically feed it to one’s head.

A weekly read for book lovers from Jason Steger. Sign up now.