The Rev. M. Owen Lee, a Roman Catholic priest whose childhood fascination with opera prepared him for a 23-year avocation as a knowledgeable and familiar voice on Saturday afternoon radio broadcasts of the Metropolitan Opera, died on Thursday in Toronto. He was 89.

His death, at Presentation Manor, a Catholic retirement home in the Scarborough section of the city, was confirmed by the Rev. James K. Farge, a friend.

Father Lee was a scholar by training. His field was the classics. But he did not sound particularly dry or academic on the radio as an opera quiz panelist or as a commentator explicating characters’ motives, composers’ motifs and librettists’ plot twists for an international audience.

His commentaries were typically heard during the first intermission of the live Saturday matinee broadcasts, the quiz segment during the second.

He delivered his “heart-in-throat debut,” as he later called it, in 1983, between acts of “Les Troyens,” the epic by Hector Berlioz, which had opened the Met’s 100th season with the tenor Plácido Domingo as Aeneas and the soprano Jessye Norman as Cassandra.

Begun in 1931, the Saturday matinee broadcasts, with commercial sponsorships, are the longest-running continuous classical radio series in American broadcast history, according to the Met. 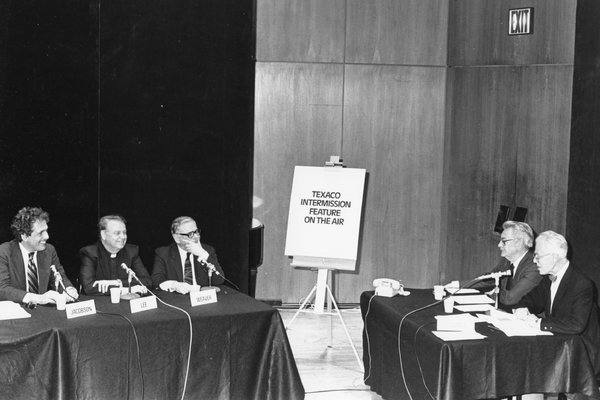 Father Lee, a member of the Basilian Fathers order of priests, was teaching in California when the Met first invited him to appear. He soon realized that he did not have a winter coat to wear to New York.

As the order’s website recounted the episode, “his Basilian superior, who took the vow of poverty very seriously, offered him an old coat that he and Father Lee made presentable by covering the patches with black shoe polish.”

Father Lee — who discarded his first initial, for Mark, on the air — was proud to say that he received 100 letters of thanks after he did a segment on Wagner’s last opera, “Parsifal.”

On the opera quiz, a panel of three experts — music critics, record producers and well-known fans like Father Lee — field questions. (Listeners are now invited to submit questions on the program’s website.) Sometimes they are asked to name the opera from which a familiar-sounding melody of an aria has been taken. Sometimes they are asked to identify the singer in a recording of an excerpt.

Father Lee was a competitive contestant whose hand often went up first.

“He really wanted to get them right,” said the pianist Brian Zeger, the artistic director of the vocal arts program at the Juilliard School, who was a panelist alongside Father Lee and later a host. “He knew a great deal, and he wanted to make sure that what he knew got on the air. He didn’t want to leave any interesting detail unspoken, and he was so pleased to be in an environment where his highly specialized fund of knowledge was acknowledged.”

Father Lee wrote more than 20 books, on subjects ranging from opera to movies to the Roman poets Horace and Virgil. One book, “Father Lee’s Opera Quiz Book,” a collection of tricky questions that quiz panelists fielded on the air. A name-the-opera section gave clues like this one:

“Hansel and Gretel sing a children’s prayer while a friend of the family shoots himself.”

The answer: “Werther,” by Massenet.

Mark Owen Lee was born in Detroit on May 28, 1930, the son of Robert Leo Lee and Helen (Miller) Lee. His interest in opera was sparked by a radio broadcast from the Met when he was 11. The opera was Wagner’s “Tannhäuser.”

He was still dissecting it nearly 60 years later when he gave the Larkin-Stuart Lectures at Trinity College of the University of Toronto. The lectures were the basis for his book “Wagner: The Terrible Man and His Truthful Art” (1999).

He began his academic career in 1960 as a lecturer at St. Michael’s and was an assistant professor of classics there from 1963 to 1968. He later taught at the University of St. Thomas in Houston and at Loyola University in Chicago before returning to St. Michael’s in 1975.

After beginning his Met Opera gig in 1983, he would commute to New York from Toronto, usually flying in on the Thursday or Friday before a broadcast and staying in the parish house of a nearby Catholic church. He was paid an honorarium but no travel expenses; he paid for his plane tickets himself.

His last appearance on a Met broadcast was in March 2006.

He is survived by two brothers, Vincent and Matthew, and nine nieces and nephews.

The Met broadcasts were such a part of his life that Father Lee occasionally gave them up for Lent.

But arias and recitatives were not all he knew. Michael Bronson, who produced the intermission segments, said that if Father Lee arrived early for a rehearsal for one of his commentaries, he would sit down at the piano and play show tunes.