Prime Minister Scott Morrison says the protesters who brought a gallows and nooses to the Victorian Parliament are “appalling”, as he distinguished between them and other Australians who were unhappy with government interventions.

He reiterated his view that Liberal MPs should not have attended the protests, at which people chanted “kill Dan Andrews”. 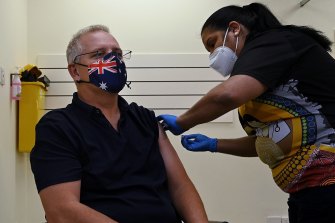 “I couldn’t have been clearer about denunciating the violence and threats and intimidation,” Mr Morrison told reporters in Sydney.

When asked about the gallows at Parliament, Mr Morrison said “that’s appalling”. But he made a distinction between those protesters and people in the general community who were sick of lockdowns.

“I think that you’re making an assumption that the frustration that Australians feel is only limited to a small group of people who have engaged in violence and threats and intimidation and have worked against the vaccination program,” he said.

“I have no sympathy with that agenda. But for the broader view of Australians who have done the right thing and got vaccinated, and want to come together again and want their lives back and want governments to stop telling what to do and them stepping forward in their own future. That’s the cause I have sympathy with.”

Mr Morrison said he had been the one pushing state governments to introduce vaccine mandates for aged care, and it took them several months to agree to do it.

“I’ve said very clearly that over the course of the pandemic that these restrictions have been, regrettably, necessary. And I was the advocate of those,” he said.

“But we have now got to the point where the Australian economy is opening up again because of the hard work of Australians in ensuring that they went forward and did what we asked them to do, and that was to push through the lockdowns.

“These were not issues that Liberal governments in particular wanted to rush towards. But they were necessary. But there comes a time where government has to step back.”

“He made some statements saying that was inappropriate, but then went on to speak about people’s frustrations, he only put the second bit up on his Facebook posts, thereby eliminating any criticism of this activity,” he told reporters.