Youthful mother-of-three claims she gets mistaken for the SISTER of her 15-year-old and even got ID’d buying a hamster – but can you guess how old she is?

A mother-of-three has claimed she constantly gets mistaken for her 15-year-old daughter – and said she was even ID’d to buy a hamster.

Nina Dixon, who is actually 31, of Darwen, Lancashire, said people are stunned when they find out she is a mother of Millie, 15, Keaton, 11, and 10-month-old baby Harmony.

And the student nurse – who had Millie when she was 16-years-old – said people constantly think she is Millie’s twin sister rather than her mother.

Her youthful looks mean she has to take her ID on every night out, while she even got asked her age when trying to buy a hamster.

Nina, who explained she does look like ‘a little girl’ sometimes at 5’1, said: ‘It is frustrating but other times it can be flattering to know I still look young.’ 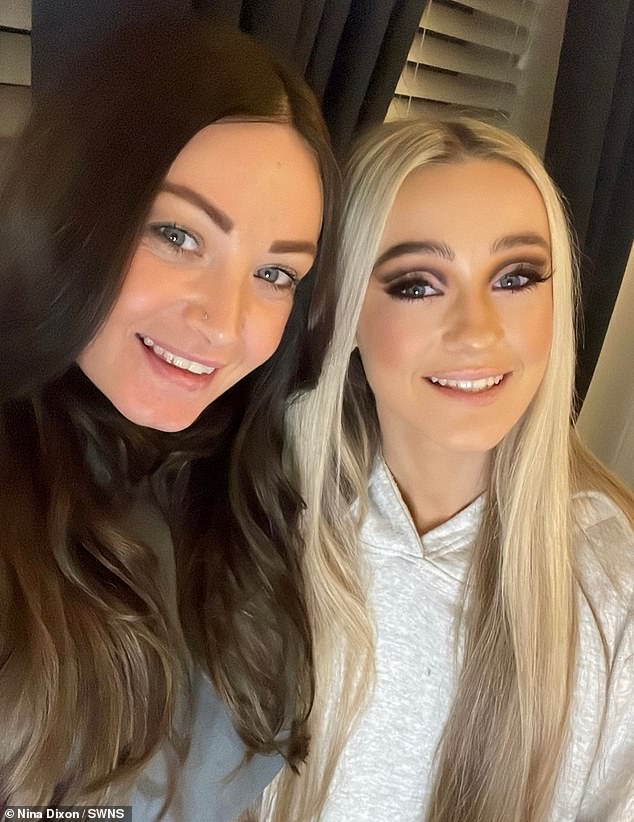 Like sisters: Nina credits her youthful looks to genetics and said she has been mistaken for a pupil at her children’s school (pictured, with her daughter) 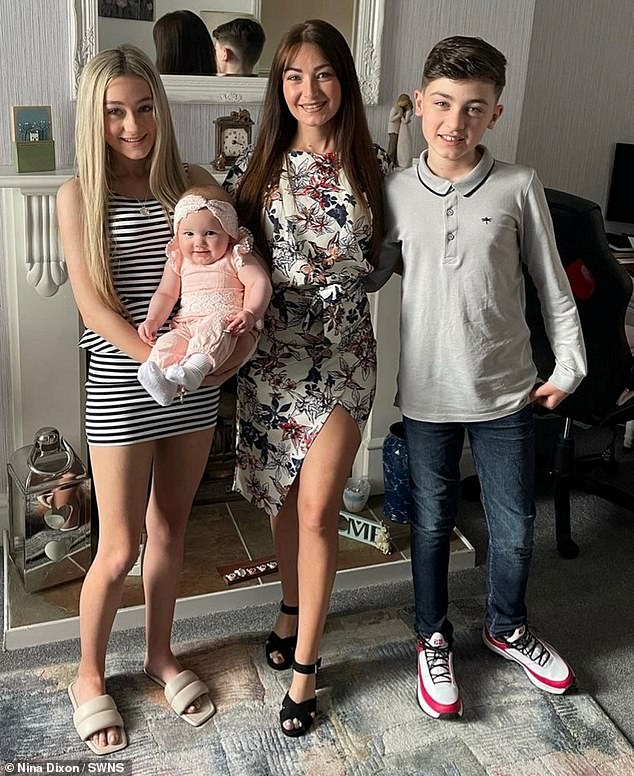 Pictured Millie, Harmony, Nina and Keaton. Mother Nina constantly gets mistaken for her 15-year-old’s twin and looks so young she got asked for her ID to buy a hamster

Nina said she believes she gets mistaken for being the sister of her children because she had them so young.

Speaking about having Millie when she was just 16, she said: ‘People said that I wouldn’t amount to anything.

‘It was hard to hear and stayed with me a long time.’

But Nina took to being a mother and had her second child, Keaton, in February 2011. 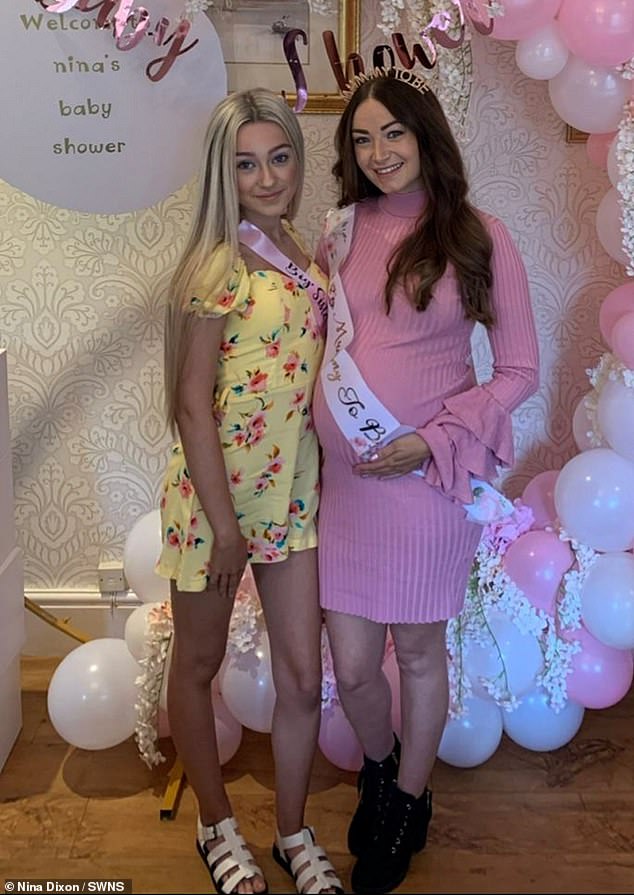 When Nina first became pregnant at 16, some people said she wouldn’t amount to anything – comments which ‘stayed with her a long time’

‘When Keaton was just seven and in year three other parents thought I was a pupil too.

‘It can be frustrating but mostly I see the positives.’

Nina said: ‘People think I’m Millie’s sister all the time and now my son has shot up it’s happening with him too. 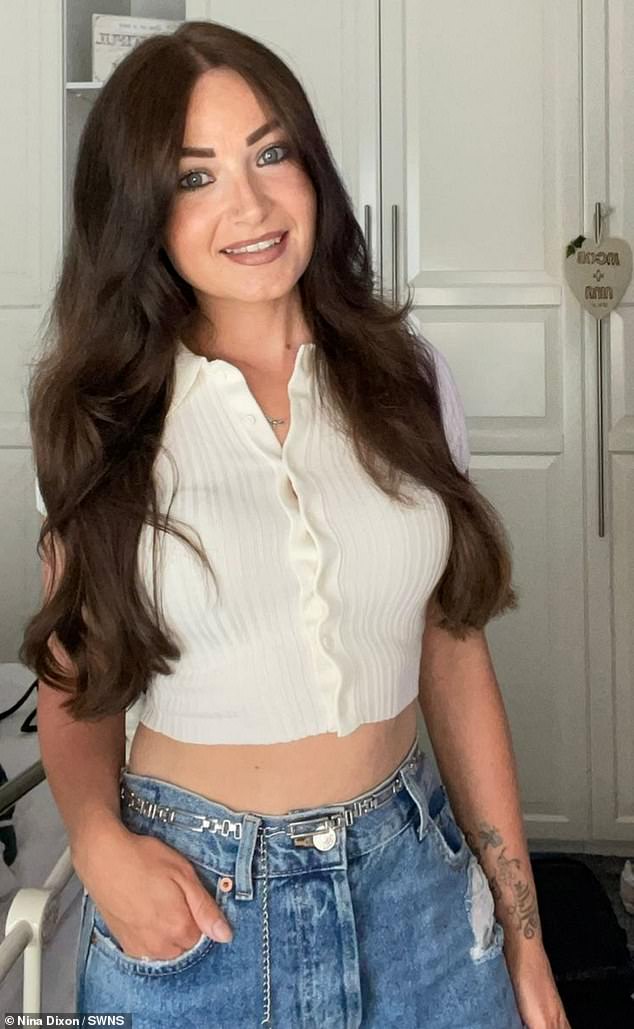 Youthful mother of three: Pictured Nina and baby Harmony. Nina said her petite frame may be part of the reason people think she is still a girl – she is just over 5ft tall and wears size two shoes

‘I went to buy a hamster for my son a few years ago and the assistant asked if a parent was with us.

‘I laughed it off saying I was their mother, but he persisted to ask me for ID as he didn’t believe me.

Nina credits her youthful appearance to genetics, explaining:  ‘My mother has always looked great for her age, so I think it runs in the family.’

And she also thinks being petite has something to do with it. 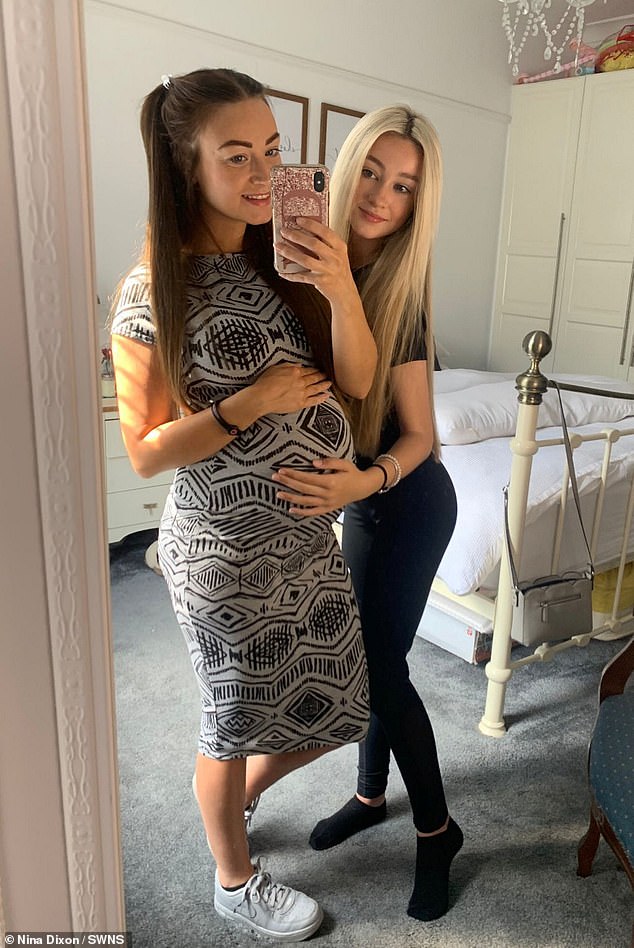 Despite being a mother of three, Nina often gets mistaken for the sister of her eldest Millie, pictured, now 15

She added: ‘I do look like a little girl sometimes.

‘When I’m with my mother who is in her sixties, and the kids, people think we’re all her kids.’

Nina says her most embarrassing moments were when she had to show ID before buying a glue-gun, and being mistaken for a pupil while at her child’s parents evening.