The federal government will announce the companies it wants to kickstart mRNA vaccine manufacturing in Australia in coming weeks, with a final decision imminent.

The decision will open the door to the development and manufacturing of the high-tech mRNA vaccines in Australia, including COVID-19 jabs, and position Australia as a leader in the ground-breaking technology. 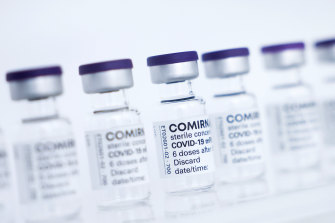 Discussions with vaccine maker Moderna about making its COVID vaccine onshore have been underway for months, as has a separate approach to market process that could select a company already based in Australia, such as CSL. It is possible both Moderna and a second company could both be selected.

Since the start of the pandemic, not a single new facility has been built anywhere in the world that can manufacture mRNA vaccines, with existing factories used to make the Pfizer and Moderna mRNA COVID vaccines. The first new facility is scheduled to come online in Singapore in 2023.

The Pfizer and Moderna COVID-19 vaccines carry mRNA [which stands for messenger ribonucleic acid] instructions to produce the spike protein SARS-CoV-2 uses to infect human cells. After vaccination, our cells read the instructions and pump out copies of the spike and our immune system spots them and quickly develops antibodies against them – giving us immunity to COVID-19.

The Victorian and NSW governments have already announced support, and funding, to fast-track the manufacture of mRNA vaccines on shore, while the Morrison government is in discussions with Moderna about setting up on shore to make its COVID-19 jabs, and potentially other vaccines. 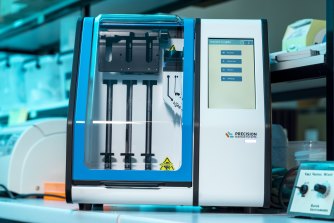 Crucial machinery for the manufacture of mRNA vaccines.Credit:Wayne Taylor

At the same time, a dozen applications are being considered to make mRNA vaccines onshore under a parallel approach-to-market. Both of these processes are close to being finalised and more than one company could be selected, but its expected it will take at least two years for vaccines to actually be produced.

“We have manufactured more than 22 million [AstraZeneca] vaccines in Australia already. mRNA will be part of our capability as we look to the future.”

“Australia, because of our unique geographic location, will be challenged in the future by various tropical viruses, and we need to be able to respond quickly. And in a geopolitical sense, we also need to play a leadership role in our region,” he said.

“Three different ministers in charge of mRNA development in this country and they’ve achieved little other than forking out $6m in fees to consultants. For the health of the nation and our economy we need Scott Morrison to get his act together on manufacturing mRNA vaccines like he said he would.”

Meanwhile, Health Minister Greg Hunt will on Sunday launch the next phase of the government’s vaccination campaign, dubbed “spread freedom”.

More than 70 per cent of Australia’s over 16-year-old population is now and more than 86.1 per cent of people have had at least one dose, making Australia one of the most vaccinated countries in the world.

The Spread Freedom campaign will emphasise the benefits of getting vaccinated such as the freedom to travel interstate and overseas.

Mr Hunt said Australia was on track to be one of the most highly and most recently vaccinated countries in the world, while it would also be one of the firs countries to roll out a booster program, too.