Britain’s very own Greta! Mother who took her daughter, seven, out of school because ‘she wasn’t learning enough about climate change’, is now teaching her at home (but they only do three hours a day)

A British mother who decided to pull her daughter out of school because she didn’t think she was learning enough about the environment says she’s now homeschooling her on how to be the next Greta Thunberg.

In January, Cora had her first day of home-school, being taught about permaculture and how to look after chickens by Clare, who has no previous primary teaching experience.

Lessons don’t start until Cora says she’s ready, and the pair only work for about three hours a day, with the mother-of-two teaching the seven-year-old about carbon footprint and renewable energy methods. 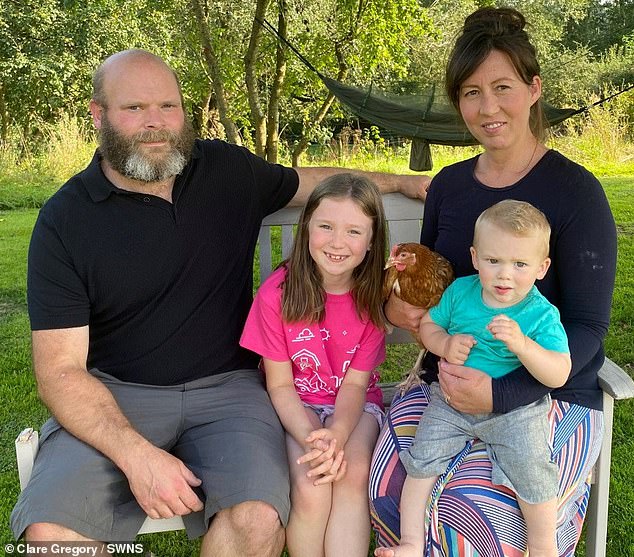 Clare Gregory, 39, from Wilmslow, Cheshire, has pulled her daughter Cora, seven, (pictured centre) from school to home-school her because she felt she wasn’t learning enough about climate change. Pictured: the Gregory family including dad Christian, mum Clare, son kit and daughter Cora 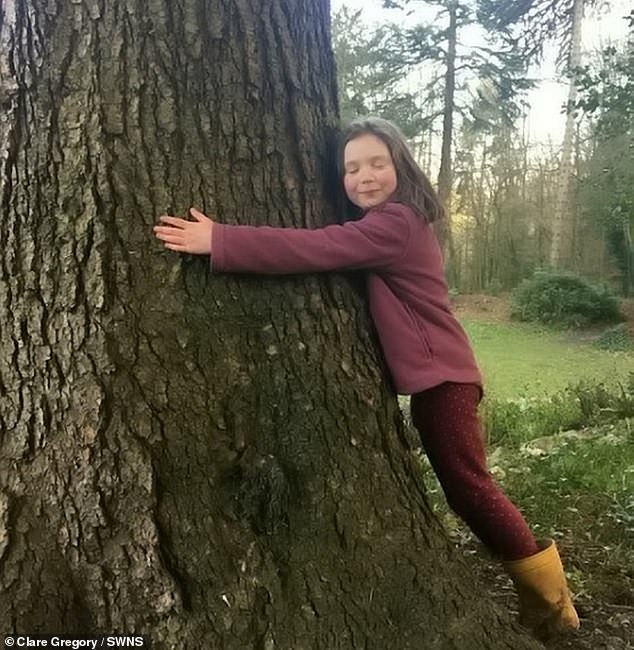 Clare teaches Cora, pictured, for aroumnd three hours a day and only when the seven-year-old says she is ready to start learning. The rest of the time is spent outdoors in nature

And after the little girl has had enough, they head out to learn about growing vegetables. Clare believes Cora’s former school was not teaching her anything about protecting the environment, although it did support the Friday Strike for Climate Change.

She said she hopes that by providing her daughter with the skills she needs to protect the natural world she can lead others to do the same as the next green changemaker.

Clare explains: ‘Cora is learning through everyday life, how to succeed and thrive and be a future green change-maker without her necessarily realising it yet at this young age.

‘We wanted Cora’s education to be more nature-based and focused on how to live more sustainably.

‘As parents, we feel not enough is being done to tackle the climate crisis.

‘We worry about what the future holds for our children and grandchildren. The popular opinion is that children do not need to be burdened by the issues and problems we are facing regarding climate change.’ 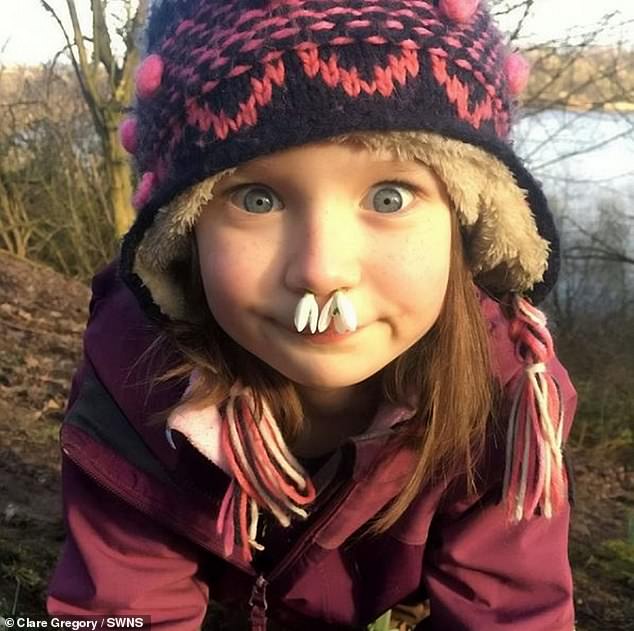 Even if her parents are hoping Cora will grow up to be an agent of change in the world, for now, the seven-year-old wants to be a post-woman 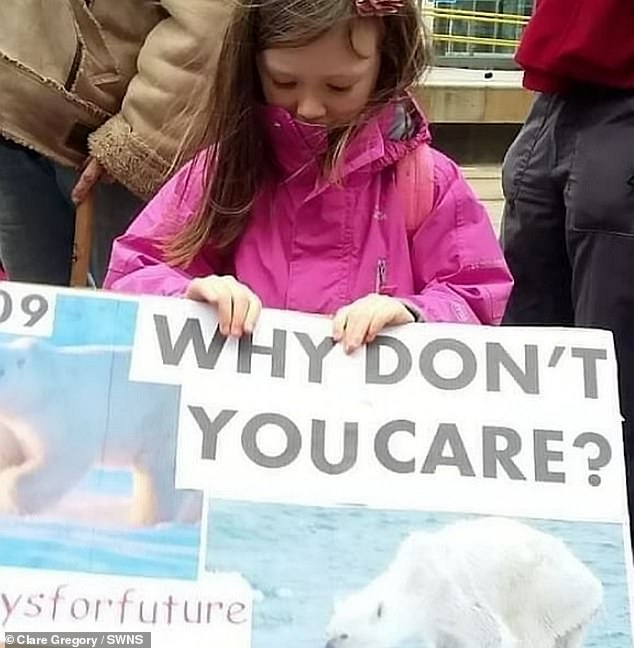 Clare takes Cora to protests where the seven-year-old holds signs about polar bears, just like her mother’s idol Greta Thunberg

The school day begins when Cora initiates it and, for about three hours a day, she learns about renewable energy or carbon footprints with books and ‘traditional’ learning methods.

The rest of the day is spent outdoors learning how to look after the chickens or grow food.

At present though, the seven-year-old’s dream job is simply to be a postwoman.

‘Which I think illustrates quite effectively that we are not forcing the need to “be” anything on her,’ Clare said.

‘We hope than she will grow up to have a good understanding of the natural world, how it works, how it supports human life.’

Mum-of-two Clare and her husband Christian Gregory, 44, have been inspired by the creative teaching styles of Norway, Finland and Denmark, which don’t follow such regimented structure. 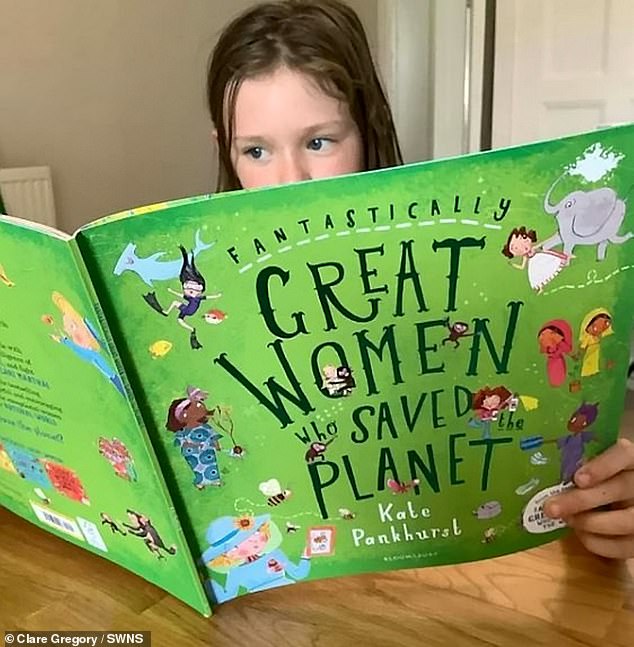 Even though Clare has no teaching experience, she felt it would be a good idea to home-school Cora, pictured, on subjects including permaculture and carbon footprints 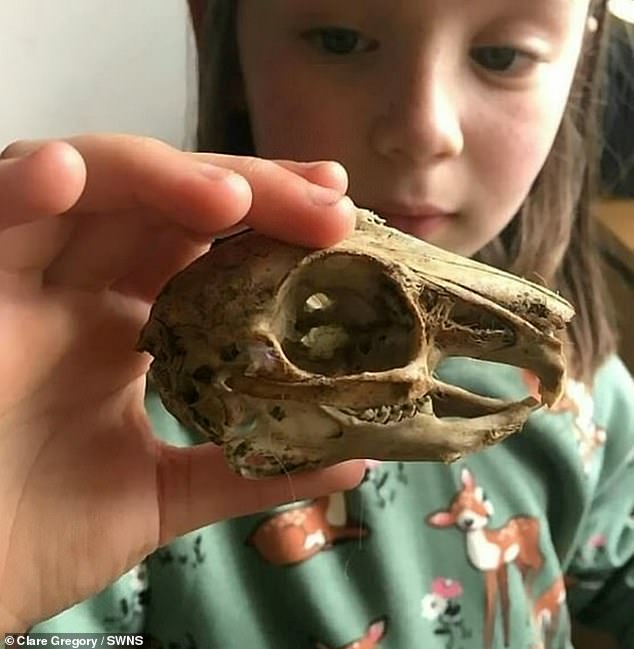 Eco-warrior: When she is not schooled by her mother, Cora helps her parents looks after their hens in the garden. Pictured, Cora with a skull

They allow Cora decide what she wants to learn about, and before her first lesson bought her some chickens to help teach her animal handling skills.

Clare said: ‘We learned what free-range and organic mean and we are presently working on producing the UK’s first zero-carbon egg.

‘More recently though, Cora expressed her wish to sell our eggs, so she had to design an egg box label, produce a flyer, and help construct an honest box.’

Clare feels this allows her to learn classic lessons like Maths, IT, and Art in a more practical way and not constrained to a regimented structure. 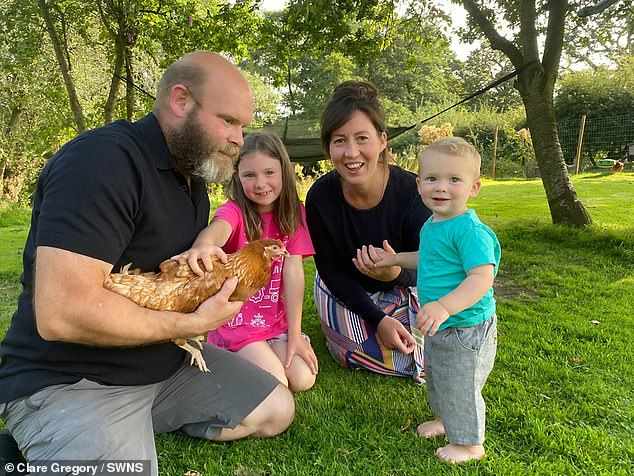 Pictured: Clare and her husband Christian, 44, with Cora and her brother Kit petting a hen in the garden

‘We do not follow a curriculum,’ she said. ‘We like that learning this way is more hands-on, relevant and experiential.

‘We feel, like to schools abroad, it better prepares children for life.’

Little Cora was inspired by Swedish climate activist Greta Thunberg, who pioneered the School Strike for Climate in 2018.

Clare said: ‘She is aware of who she is and totally admires her for “standing up to grown-ups”.

‘She thinks she is “brave” for doing what she is doing and says more people should do something to make people listen to them, like Greta, if they believe something is that important.’

The family of-four try to live as sustainably as possible by living close to zero waste and recycling what they do produce, composting, walking and cycling when possible and mending their own clothes. 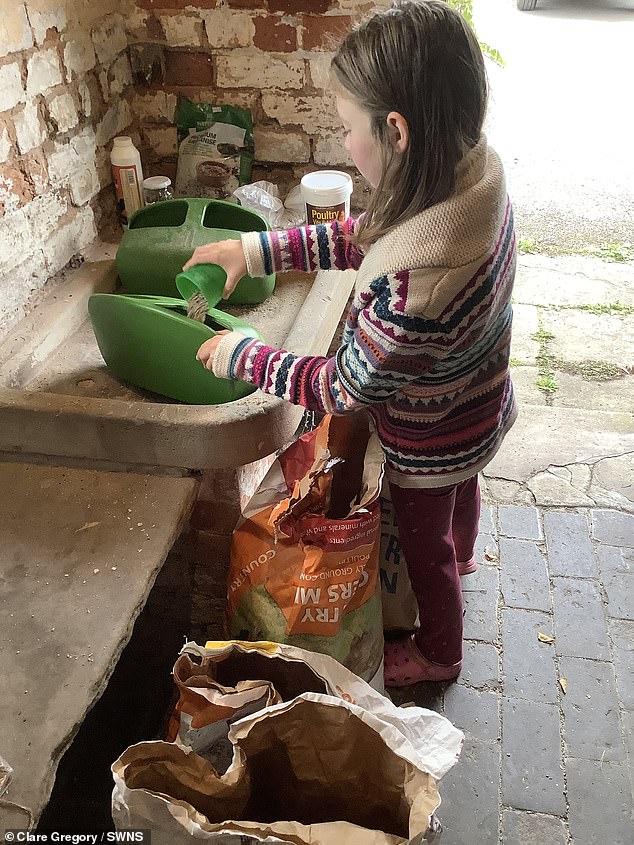 It’s hard graft at home for Cora who has to feed and look after her parents hens. The family are supported by Christian’s job as a Customer Services Manager at Manchester Airport

Clare gave up her job as childbirth educator to teach Cora full-time, so the family are supported by Christian’s job as a Customer Services Manager at Manchester Airport.

This is conflicting for them, as air travel is such a large contributor to climate change.

Clare said: ‘What the world needs is many people doing sustainable imperfectly, rather than a few doing it perfectly.’

Family and friends have mixed opinions as to how the parents are raising Cora, who plan to also implement a similar education on their son 15-month-old Kit. 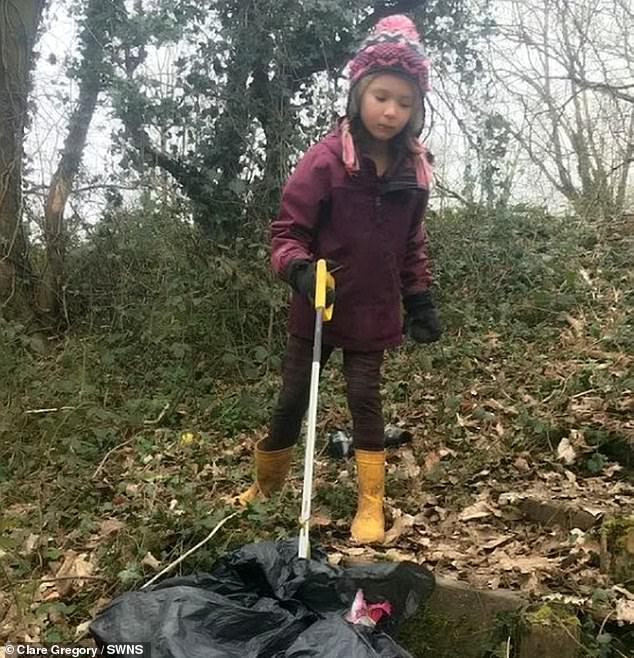 Clare said: ‘Family think we are crazy for taking her about of school, they think we will deeply regret it.

‘Far from preparing Cora well for the future, they believe she will be ill-prepared having not learnt the national curriculum.’

But they are pushing forward with their eco-curriculum in a bid to practice what they preach and help make a better future for their kids.

Clare is starting a course to become a Green Educator with Green School later this month.

She said: ‘How can anyone with young children in their lives not worry about the world our children will inherit and how it will affect them?

‘We would like to inspire families to see the benefits of taking responsibility for teaching their children greener ways of living.’ 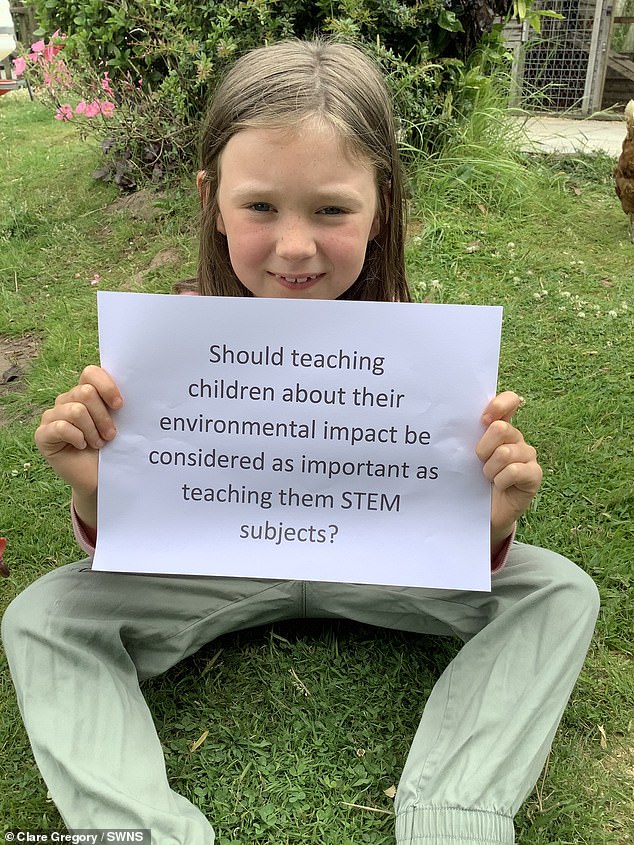 Clare said she wanted to teach Cora to be more eco-responsible, even though her father works for an airport 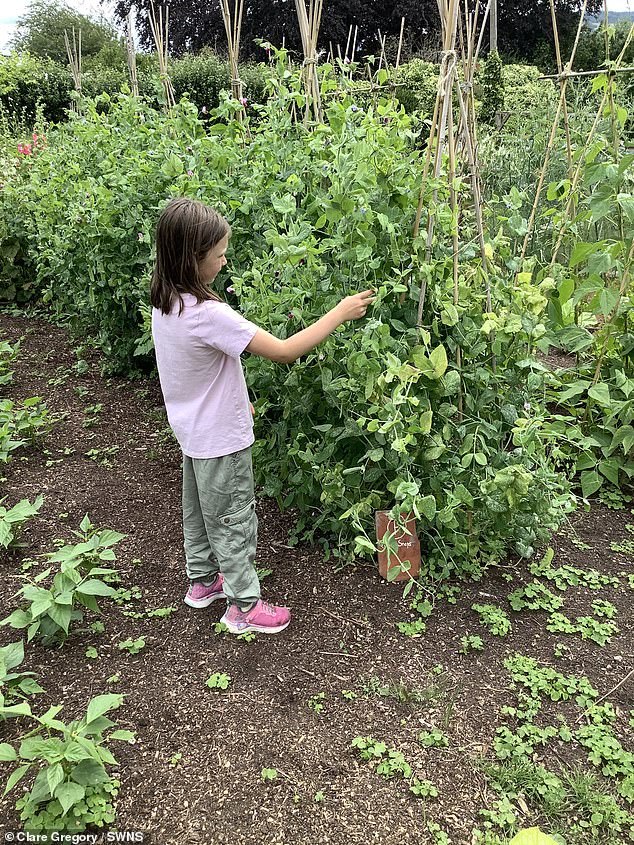