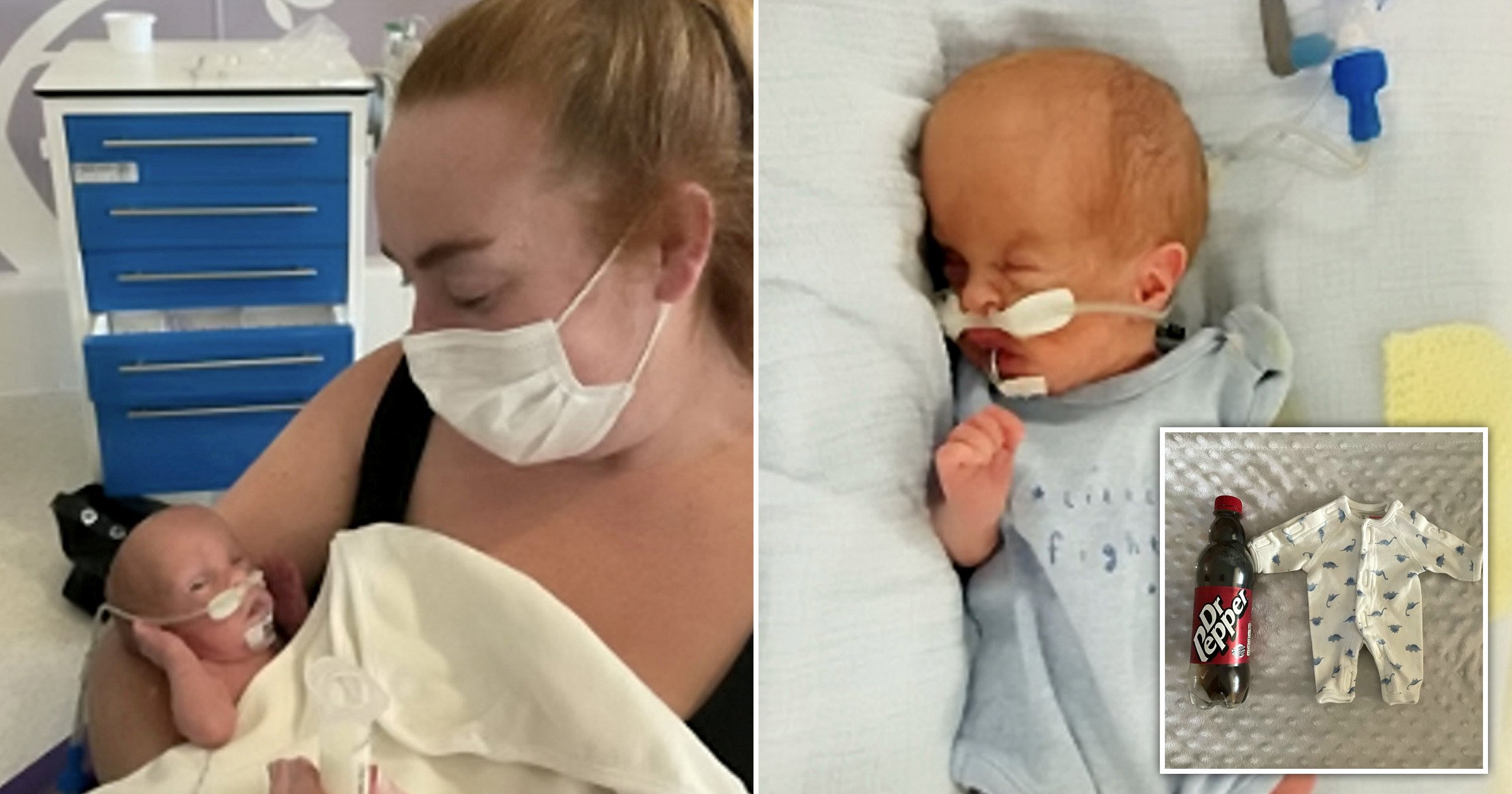 A baby who was given a 1% chance of survival is now thriving at nine months old.

Pregnant mum Ann Rice was urged to abort her baby when her waters broke at 20 weeks.

Medics told the mum that she was expected to miscarry naturally within 48 hours – so was sent home from hospital with antibiotics. When this didn’t happen, Ann was advised to terminate the pregnancy, as there was a risk she could contract sepsis.

However, Ann – who is also mum to Connor, seven, and 19-month-old Riley – says that despite the ‘horrific’ news, she and her husband Chris decided to continue the pregnancy.

He was also diagnosed with chronic lung disease, due to having underdeveloped lungs – so spent four months on the neo-natal unit.

On several occasions, doctors were unsure if the little one would pull through.

However, Chester defied the odds and is now at home with his older brothers – although still needs oxygen 24 hours a day.

Ann, from Cardiff, says: ‘He’s just starting to develop a personality now, and he’s always smiling, even after everything he’s gone through.

‘He’s happy, he’s OK and he’s a lovely little boy. But if I had gone by what the doctors had told me, I’d have terminated him and missed out on how he is now.’

The mum-of-three describes the 10-week period between her waters breaking and giving birth to Chester as a ‘really weird time.’

She adds: ‘I was just waiting for ten weeks, and trying to stay on bed rest as much as I could whilst also looking after another, eight-month-old baby.

‘Every week we got further into the pregnancy was like a little victory, because it was another week of Chester getting bigger and stronger.

‘It was just really important to us to get past the 24-week mark, because that’s when the pregnancy is deemed viable.

‘If he was born before that, the doctors wouldn’t have intervened to save his life if he needed it.’

When he did arrive, Ann had less than 1cm of fluid in her amniotic sac – which caused complications.

In total, Chester spent 113 days in the neo-natal unit, with Ann and Chris having to take it in turns to visit him.

Ann adds: ‘In those four months, he had sepsis four times, he had a blood transfusion, he almost had to have surgery for a perforated bowel – but luckily that fixed itself.

‘We were able to bring him home in April – but just two weeks later he caught bronchiolitis which developed into four other respiratory viruses, so he had to go back to the ICU.

‘He was in there for four days in a critical condition. It felt like one step forward, two steps back, all the time.’

Now, at nine months, Chester weighs 16lbs 14oz – still significantly below the 22lbs average for babies of his age. But Ann says he’s growing stronger every day and doctors are happy with his development.

She adds: ‘If I was to take the oxygen away from him now, he’d be fine, he wouldn’t be gasping for air right away.

‘It’s just over a certain amount of time he would start to struggle, and then he would be using his energy to breathe rather than to grow.’

Ann says the Little Heartbeats charity helped her through the experience – and now hopes her story will raise awareness for other mums going through a similar thing.