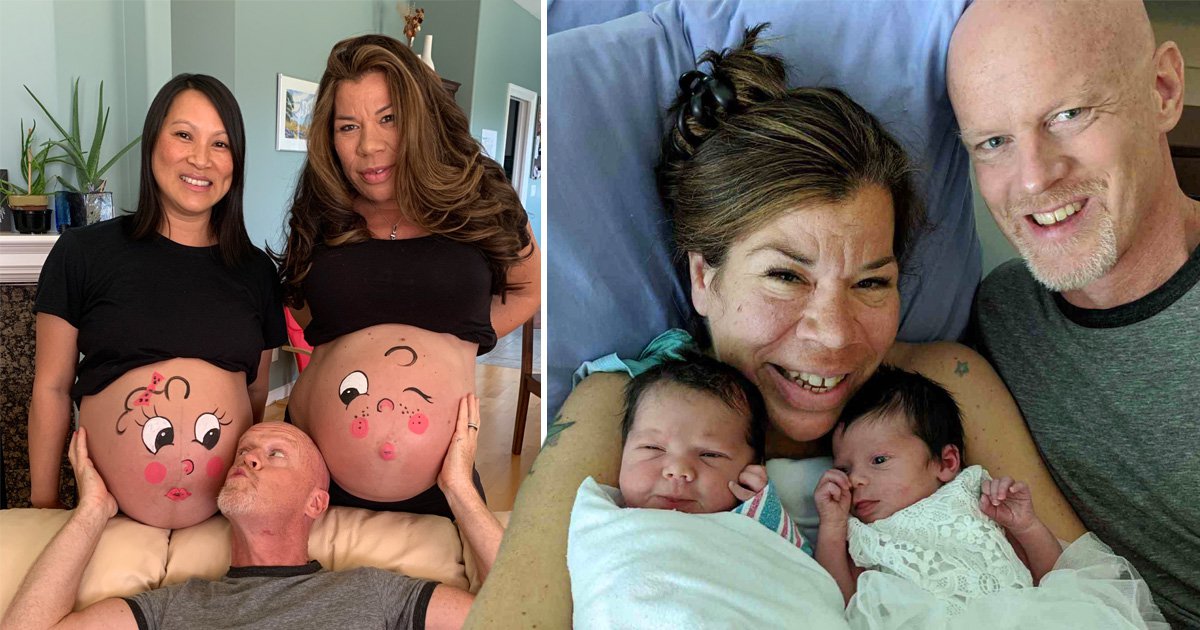 A couple who spent tens of thousands trying to have a baby were miraculously able to conceive naturally at the same their surrogate became pregnant – with the two women giving birth just four days apart.

Spiritual healer and medium Margo met artist Ian back in 2012, with their friendship soon turning from platonic to romantic.

They moved in together in 2014 and began trying for a baby before tying the knot in 2019, but the couple’s emotional six-year journey to parenthood was one riddled with heartache.

Margo and Ian, 43 and 50 respectively, suffered multiple miscarriages and a full-term stillbirth before their dream came true.

‘We had no idea how hard the journey would be to becoming parents,’ said Margo.

Margo, who is now mum to Sofia and Austin, both 22 months, said: ‘It’s been an unbelievable journey, and we are so happy to be parents.

‘After meeting Ian, we sadly suffered seven losses before our double rainbow babies. We experienced five losses before getting pregnant with our son Olivier, who was sadly stillborn at 41 weeks.

‘We had one more miscarriage after that before deciding to call it quits. The doctors could not give me a reason why the pregnancy losses kept occurring. It was absolutely devastating.’

After one loss, the couple met up with their family – including Margo’s sister Meena – to share the tragic news.

‘That was when Meena offered us this amazing gift to carry a baby for us,’ recalled Margo.

‘I was totally blown away and left speechless. I burst into tears and just hugged her.

‘It was such a selfless and courageous act, we will be eternally grateful to her.’

Meena was taken in by Margo’s parents as a teenager, with the pair growing up together like sisters.

She had been there throughout the couple’s pregnancy journey and shared their heartache over the losses they had experienced.

Meena, an educational assistant, said: ‘After Olivier passed away, I wanted to suggest that they get a surrogate, but it was too soon to talk about that.

‘At the time I thought maybe I should be their surrogate. I knew it would be amazing, and I really wanted to do it for them.

‘Some time later on our family summer get together, Margo announced to us that she again had a miscarriage. She was devastated and was feeling hopeless.

‘I met her in the kitchen while doing dishes, and we had a nice sister to sister talk. I offered to be her surrogate, and it all went from there.’

‘When Meena fell pregnant,’ said Margo, ‘Ian and I went to Mexico on a vacation to spend time together while also letting my sister be in the space she needed.

‘We were relaxed, happy and just going with the flow. I was open to miracles, and that is exactly what happened.

‘Somehow, I got pregnant at the same time as Meena. We never imagined this would be possible.’

‘Before all this happened,’ said Meena, ‘I actually had a dream that Margo and I stood by the Christmas tree with our pregnant bellies.

‘Then Margo called me up and told me my dream came true. She was pregnant too.

‘We both were over the moon with excitement, joy and happiness. I feel thankful for being part of their journey.’

The couple are now happier than ever with the ‘double rainbow babies.’

Margo adds: ‘Austin is very chilled out, relaxed and mellow, while Sofia is very alert, active and social. They get along really well and are the best of friends.

‘It’s been such an incredible journey, and we couldn’t be happier with our little ones.

‘Ian and I had always wanted to have children, and so it feels like all our dreams had come true.’