A national plan tied to $770 million of funding for mental health and suicide prevention and due by the end of next month is still in draft form as states and the federal government argue over responsibilities.

The agreement, flagged in December, requires all levels of government to decide how to fix large gaps in the system that currently leave those with more complex mental health needs struggling to find appropriate care. 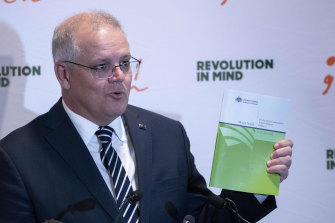 Prime Minister Scott Morrison releasing the Productivity Commission report in November. The national plan is part of the government’s response to the report.Credit:David Geraghty/NewsWire

But Senate estimates heard this week it was still in draft form and meeting the November deadline hinged on whether consensus could be reached.

Asked by Labor senator Karen Grogan whether the plan was on track for the end of next month, Health Department deputy secretary for primary and community care Tania Rishniw said it was “working in earnest” to complete it within the national cabinet’s timeframe.

“We have a solid draft between health officials but there are obviously some areas yet to be resolved,” she said on Wednesday evening, pointing to issues including transferring responsibility for psycho-social supports to the states and territories, and mental health evaluation.

“We are all very conscious of the timeline that national cabinet has set us all and I can say all jurisdictions have been engaging very actively.”

Ms Rishniw said the department was progressing with a range of Commonwealth-specific measures, including digital services and boosts to helplines, but acknowledged hundreds of millions of dollars were for projects that had yet to be agreed upon.

“There is around $770 million that’s tied up in negotiations on the national agreement,” she said.

Professor Ian Hickie, one of Australia’s leading psychiatrists and a former national mental health commissioner, said this was unacceptable.

“We know from behind the scenes it’s about money and then accountabilities, each pointing the finger at the other,” he said.

National agreement on funding and responsibilities was a key recommendation of the Productivity Commission’s report on mental health, which was released by Prime Minister Scott Morrison in November last year – five months after the federal government received it and almost a year after a draft version was completed.

The Commonwealth committed a record $2.3 billion over four years for mental health funding in the May budget, with a focus on addressing the “missing middle” of mental health services for people who require more than basic care but do not need acute hospital treatment.

Professor Hickie, who is co-director of health and policy at the University of Sydney’s Brain and Mind Centre, said while there had been huge financial investments from the federal government and Victoria, no one was taking responsibility for the much-needed reform.

“There’s no point in putting lots of new money into a dysfunctional system. So I don’t think money is the issue. I think the structural reform is the issue,” he said.

Despite being the sixth national mental health plan in 30 years, he said the sticking points remained the same. He wants to see a draft plan published publicly and the federal government taking responsibility for the huge reforms needed.

“We keep tinkering with this petrol-guzzling old Holden car called the Australian healthcare system, [thinking it] will produce a BMW or Mercedes. It won’t,” he said.