Glasgow: The failure of the world’s richest nations to come to agreement on a timeline to phase out fossil fuels during G20 talks in Rome on Sunday cast a pall over the formal opening of United Nations climate talks in Glasgow, with Australia attracting particular criticism from some observers.

“The G20 has not provided the clear signal of leadership coming into the COP that we needed,” Greenpeace International Executive Director Jennifer Morgan told the Sydney Morning Herald and The Age during an interview at the COP26 talks. 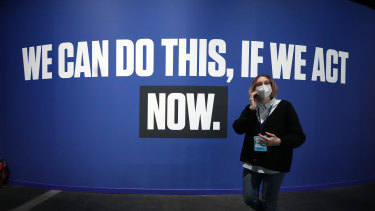 Great expectations despite the G20 disappointment. A mural at COP26 at SECC in Glasgow, Scotland. Credit:Getty

“We had expected there were going to be clear time frames of coal, oil and gas, but there were a number of countries, including Australia, that stopped that from happening.”

“Developed countries like Australia are historically responsible for the trouble we are in, having exploited fossil fuel resources for a long time, and in Australia’s case have not taken any significant action to reduce their emissions,” she said.

In a statement she added that the G20 communique was “weak, lacking both ambition and vision” and that if the Glasgow climate talks were to succeed, “the likes of Australia and Saudi Arabia need to be marginalised”.

Marshall Islands climate envoy Kathy Jetnil-Kijiner told the Herald and the Age that Australia and the G20 must increase their ambition or her nation would cease to exist.

“We created .00005 per cent of global emission, but we will go underwater at 1.7 degrees. It is outrageous they have not done more,” she said.

Mohamed Adow, director of the think tank Power Shift Africa said that the “weak” G20 statement was “what happens when developing countries who are bearing the full force of the climate crisis are shut out of the room.”

“The world’s biggest economies comprehensively failed to put climate change on the top of the agenda ahead of COP26 in Glasgow.

“At least the UN process is open to all countries and allows the voice of the climate vulnerable to be heard. The exclusive club of the G20 is clearly not fit for purpose.

Addressing the opening session of COP26 executive director of the United Nations Framework Convention on Climate Change Patricia Espinoza said that in the talks the world faced stark but simple choices.

“We either choose to achieve rapid and large-scale reductions of emissions to keep the goal of limiting global warming to 1.5 degrees — or we accept that humanity faces a bleak future on this planet.

”We either choose to recognise that business as usual isn’t worth the devastating price we’re paying and make the necessary transition to a more sustainable future — or we accept that we’re investing in our own extinction.”

She said the world needed more ambition from G20 nations, which were responsible for around 80 per cent of global emissions.

Though there was disappointment that the G20 talks did not provide the momentum for COP26 that many hoped for, others welcomed some of its outcomes.

“It is impressive that 90 per cent of G20 countries have now indicated some intention to reach net-zero, which would have been unfathomable just a few years ago,” said Helen Mountford of the World Resources Institute.

She added that it was significant that for the first time leaders had acknowledged that methane emissions needed to be curbed.

Greenpeace’s Jennifer Morgan said she was worried about the potential for success of the COP26 talks, because the stakes are so high.

“But my experience of these meetings is that things can happen over two weeks that you do not expect,” she said.

“Countries are pushed beyond their comfort zones, beyond the brief that they came in with because of the pressure from other countries, particularly vulnerable countries like the island nations of the Pacific.

“You just can’t look them in the eyes at a negotiating table and damn them to not exist any more. That is what is on the table here in Glasgow.”

Get daily updates on the climate summit that will shape our future. Sign up to our COP26 newsletter here.