New NSW Premier Dominic Perrottet has urged an overhaul of the way the GST is carved-up between the states and territories but met immediate resistance from Prime Minister Scott Morrison who says there will be no change.

Mr Perrottet, who as Treasurer warned of the substantial financial problems caused by GST changes put in train by Mr Morrison, said on Tuesday that without revisiting the allocation process the people of NSW and Victoria would pay a heavy financial burden.

Under a deal struck by Mr Morrison and put in place by current Treasurer Josh Frydenberg, the GST allocation system was radically changed in 2018. At the time, WA was getting about 30 cents of every dollar of GST raised within its boundaries. 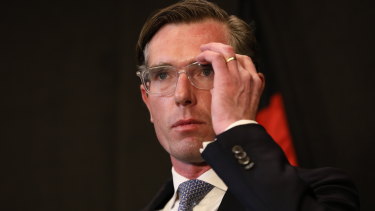 NSW Premier Dominic Perrottet says WA has to come to the table to talk about changes to the GST deal.Credit:Dominic Lorrimer

Under Mr Morrison’s policy no state’s GST share will ultimately fall below 75 cents for every dollar. The federal government is topping up the GST pool to ensure WA’s share is gradually lifted.

Amid concern from state treasurers and members of the government’s own backbench, it included a provision under which separate payments can be made to ensure no state or territory is worse off under the deal. That provision ends in 2026-27.

Modelling by Victoria’s Treasury shows that if WA goes through another mining boom, NSW would be $1.4 billion worse off than if the deal continued, Victoria’s budget would take a $1.2 billion blow while Queensland would lose $850 million. WA would gain $4.9 billion.

If the annual carve-up of the GST was in line with its average of the past decade, NSW and Victoria would both take a $1 billion hit, Queensland would lose $750 million while WA would be delivered an additional $4.4 billion.

Mr Perrottet, who labelled WA Premier Mark McGowan the “Gollum of Australian politics” over the GST, said the current arrangement had to change.

“Victoria and NSW under these new arrangements where ‘no worse off’ is removed, we will have a heavy burden, a very heavy burden in supporting those (other) states,” he said.

“I think WA particularly needs to come to the table and get a deal that’s fair to the country.”

The GST deal added an estimated $7.5 billion to the federal budget deficit over the next three years.

The WA budget’s 2020-21 surplus of $5.8 billion was boosted by $1.5 billion due to the GST arrangement. Another $2.1 billion in extra federal assistance will flow to WA this year.

Mr Perrottet said NSW and Victoria will be left worse off unless there are changes to the GST system.

“Whilst there might well be not that much public interest in GST reform, it’s GST that pays for our schools and our hospitals and our nurses and our teachers and our police officers, it’s incredibly important,” he said.

The GST issue is a political powder keg in WA where a series of Liberal-held seats are in play.

WA Premier Mark McGowan said he had trouble keeping up with the number of NSW premiers, noting he did not have the number of Mr Perrottet. 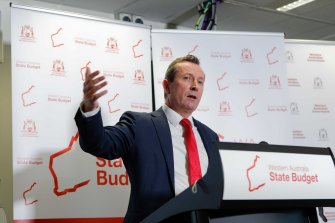 WA Premier and Treasurer Mark McGowan says his state will fight any effort to change the GST dealCredit:Trevor Collens

He said WA would resist any effort to change the GST deal.

Mr Morrison on Tuesday told Perth radio the deal would not be changing.

“The deal is done. It’s ended. It’s not something I’m revisiting,” he said.

“As Prime Minister, I ensured that it happened. And WA is almost $5 billion so far better off because of that decision. And the one person you can trust to keep a deal is the one who did the deal, and that’s me.”

Labor leader Anthony Albanese, who spoke to the WA Labor conference at the weekend, said the ALP will not change the agreement.

“We’ve made it very clear that the deal that’s been done, and now legislated, will stay under a Labor government that I lead. I want to help Western Australia,” he told WA radio.