The NSW government sought to increase the amount of water permitted to be extracted from the Murray-Darling Basin, revealing in an email that the Commonwealth body in charge was “desperately afraid” of the media coverage when the plan was made public.

“The [Murray Darling Basin Authority] is desperately afraid of the media coverage when it becomes apparent that the number for [the Baseline Diversion Limit] has gone substantially up,” wrote Andrew Brown, the principal water modeller with the Department of Planning, Industry and Environment, in an email dated July 22, 2018.

“There will be immediate claims that NSW is fiddling the figures, closely followed by questions about why MDBA isn’t stopping this from happening,” Mr Brown said, adding the authority would struggle to address questions after an “initial shock phase”, including how they got it “so wrong”.

The emails, obtained under a call for papers by the Greens, show discussion of ways more water could be extracted from the basin while still remaining below the so-called baseline diversion limit introduced in 1995. 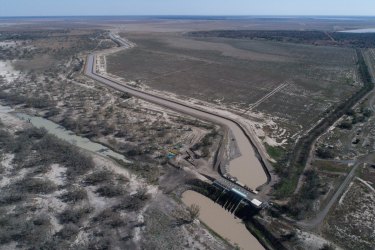 The principal water modeller within the NSW government warned a storm would break once it became clear that the models underpinning water extraction in the Murray-Darling Basin had changed.Credit:Nick Moir

The release of the emails comes ahead of hearings this week of the NSW parliament’s Floodplain Harvesting Inquiry. It is looking at the government’s efforts to meter and monitor water captured in dams as floodwaters flow overland.

That water usage was not included in the original cap on water extraction under the $13 billion Murray-Darling Basin Plan that aims to restore the health of the nation’s biggest river system.

“South Australia, Victoria, the ACT and Queensland have all adjusted their [baseline diversion limit] estimates with best available science,” a spokeswoman for Water Minister Melinda Pavey said. “NSW expects to have the same opportunity”.

“We expect the inquiry to clear up a number of misconceptions this week and put us in a position to be the first state to measure and license floodplain harvesting by the end of next week,” the spokeswoman said.

“These models are being used to grant compensable floodplain harvesting entitlements worth hundreds of millions of dollars. They must be held to the highest standards possible,” Ms Faehrmann said. “If these models result in the over-allocation of water, it will have long-lasting and disastrous impacts on the Murray Darling Basin.” 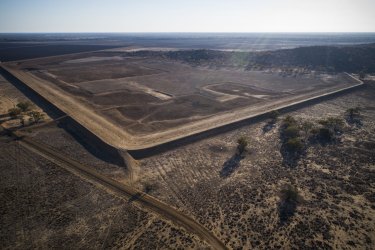 The government wants to measure how much water is caught by dams from floods. Upstream water capture, which has been permitted, comes at the cost of downstream communities and the environment.Credit:Wolter Peeters

Maryanne Slattery, a former Basin official who now works as a consultant, claimed the emails suggested the government and the Basin Authority were “trying to hoodwink everybody” into allowing caps on water take to be exceeded.

“If they implement this as planned, there are no volumetric limits,” Ms Slattery said. “It’s all just a circus.”

In other candid emailed comments, Mr Brown said in March 2018 that a new model didn’t have to be perfect: “You might have a list of 10 things you know are wrong with the model, then fix one of them and it is still an improved model even with nine other things you know are wrong still. A model doesn’t even have to be fit for purpose to qualify as best available information.”

On June 3, 2018, Mr Brown also dismissed the authority’s demand to hire a consultant to help with the modelling. “[T]he consultant will still just come and ask somebody ‘what did you change and why’ and in most of the cases we don’t actually know any more because the person who did the work has left, or [it’s] just too long ago and they don’t remember.”

Jamie Pittock, the acting director of the Wentworth Group of Concerned Scientists said the government’s correspondence “demonstrates the cavalier manner in which it is managing water” including exploiting every loophole in the national water reforms to allow more water to be extracted for irrigation at the expense of the environment, Indigenous nations, and downstream communities and industries.

“It is time that the federal government nationalised and published Basin water modelling to prevent state governments hiding behind their private modelling to abrogate their responsibilities,” he said.