An obese mother who runs ultra marathons and is keen to prove size shouldn’t be a barrier has revealed she’s trolled on social media for ‘promoting’ being fat.

Plucky Cath Wallis, 43, from Canberra, Australia, has completed gruelling endurance events in some of the world’s most inhospitable places.

She’s currently preparing to take part in the first ever Race to the Wreck, a 200km five day run through Namibia’s Namib desert, which is the brainchild of UK firm Rat Race Adventure Sports.

Cath, who weighs around 16-and-a-half stone (105kg), has done it all as a size 20 ‘plus size adventurer’ who’s determined to convince people of all shapes and builds they can do anything they put their mind to – but she’s faced a barrage of criticism on Instagram. 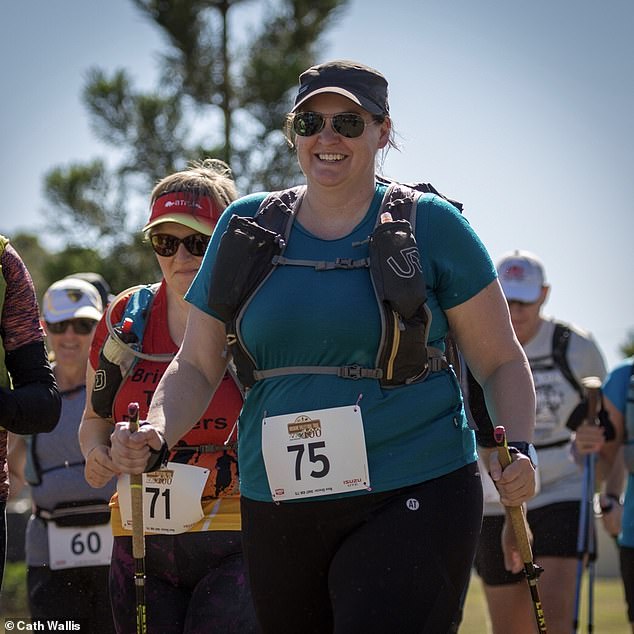 Plucky Cath Wallis, 43, from Canberra, Australia, has completed gruelling endurance events in some of the world’s most inhospitable places

Lawyer Cath, who has also been sharing her story on the platform, says: ‘Look at a starting line for an adventure race, and you’ll see there’s hardly anyone taking part who you’d described as “plus size”. And I’d like that to change.

‘I’ve been blown away by how much interest I’ve had on social media. But I do get some “interesting” comments from time to time.

‘The most common one is, “Why am I promoting people being fat?”

‘I’m not promoting people being fat. What I’m promoting is the idea that people don’t have to say, “I’ll go off and have an adventure when I’m thin”. 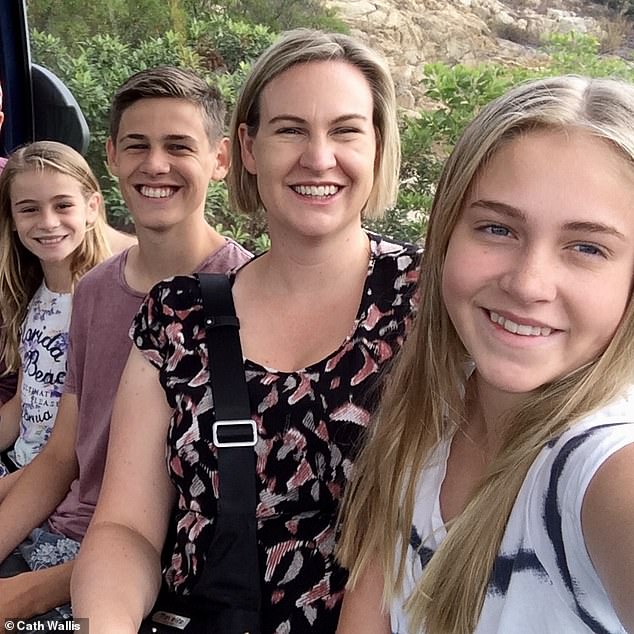 Cath, who is mum to son Jack, 18, and two daughters Jessica, 15, and Bella (pictured), says she’s trolled on social media for ‘promoting’ being fat

‘I’m saying, “If you want to go and have that adventure, go train for it and do it”. We’re not about what we look like, we’re about the kind of people we are and what we can achieve. And that doesn’t matter if you’re thin, average or large.’

‘Because I was never really any good at sport, and because I was always quite smart, I always focused on things to do with intellect rather than physicality,’ she reveals. 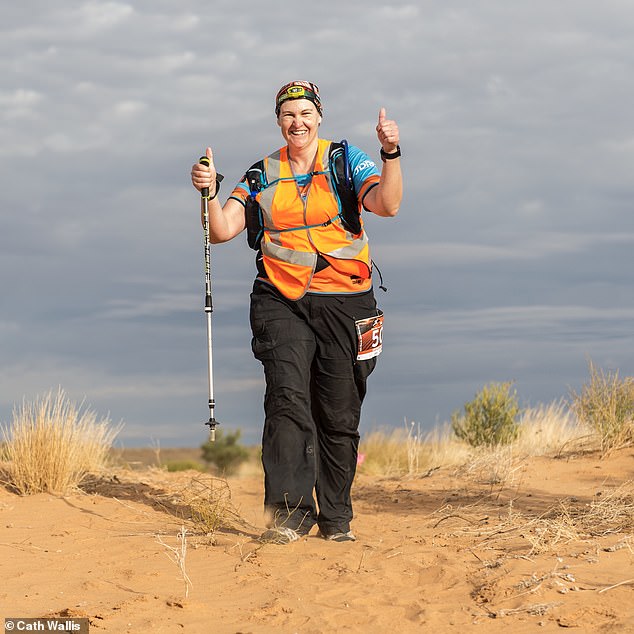 Cath completed the Big Red Run, which goes through the Western Queensland outback, in June 2017, covering 170km over six days

‘But I’d got a promotion at work and they wanted me to update my bio, expressing what my “interests” were. I realised that, apart from working and ferrying around my children, I didn’t really have any. And I thought that was pretty awful! I wanted to do something about it.’

Race to the Wreck – in November

At this point, the furthest Cath regularly walked was 5km around her local lake.

Astonishingly, she entered a 100km trail event as her debut race – called the Canberra 100 – in March 2016, which requires completion in under 29 hours.

Cath says: ‘I naively thought, “How hard can it be to walk a hundred kilometres?”

‘There was a short version of the course, which covered 20km, and the runners doing that distance wore different coloured bibs.

‘And I remember there were volunteers monitoring the road crossings and I had a couple of people say to me, “Oh, you’re doing the 100?”, while looking really surprised.

‘But I’m pretty stubborn. It made me more determined. I finished it in 28 hours and 52 minutes – just eight minutes before the cut off.

‘And the hardest part was the last kilometre, when everything started hurting. I suddenly started worrying that after all the pain and all the exertion, I might not make it. That would have been soul destroying.’ 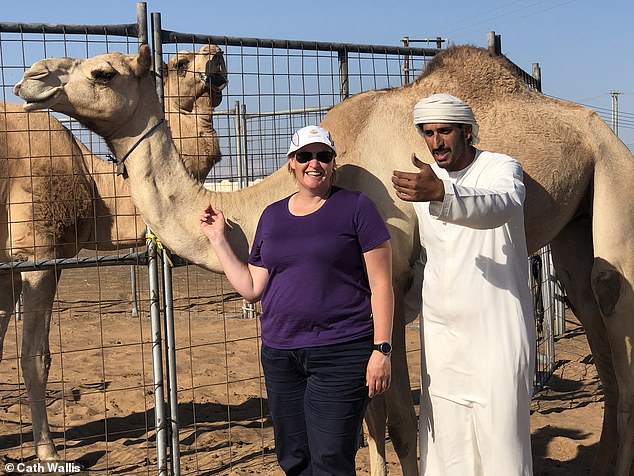 In November 2018, Cath also competed in the Oman Desert Marathon – and was unfortunately forced to pull out of the event due to heatstroke

Thankfully Cath’s son Jack was there to support his mum as she hobbled across the finish line.

She vowed she’d never do anything so foolish again, but soon found herself entering another adventure race.

Cath, a former military legal advisor who spent time in Iraq and Afghanistan, adds: ‘It solidified in my mind that you can achieve anything if you put your mind to it.

‘It made me so aware of how much getting outdoors and hiking improved everything – your wellbeing, your clarity of thought, your fitness, your ability to do day to day things. I wanted to keep going and keep doing that.’ 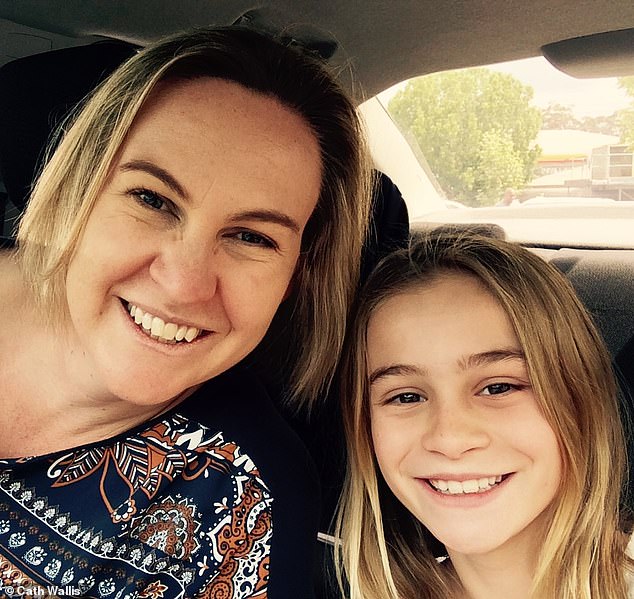 Cath, a former military legal advisor who spent time in Iraq and Afghanistan, was inspired to take part in endurance events after getting a promotion at work, where she was asked to update her hobbies in her bio

Cath went on to complete the Big Red Run, which goes through the Western Queensland outback, in June 2017, covering 170km over six days.

But while Cath is taking huge distances in her stride, she says being a plus-sized athlete does have its downside – and that’s in the damage it inflicts on her feet. 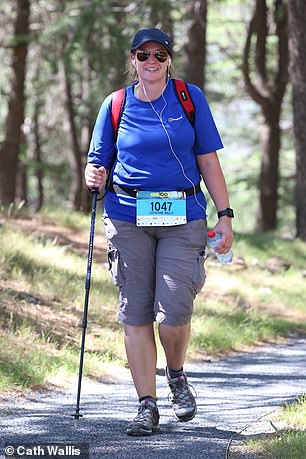 While Cath is taking huge distances in her stride, she says being a plus-sized athlete does have its downside – and that’s in the damage it inflicts on her feet

She also takes longer to complete the course than other athletes, meaning more time out in the elements.

She explains: ‘Because I’m so much heavier than most other competitors, that’s a lot of weight on my feet and joints, so I need footwear that’s more cushioned.

‘If you’re doing a marathon event and it takes you five or six hours, that’s very different to taking nine hours, especially when you do it day after day.

‘The other big things are hydration and nutrition. Some events can have checkpoints spaced 20km apart. Moving at my pace, that’s a lot of time between them.

‘You have to make sure that you’re carrying enough water and food, and that you’re looking after yourself.’

In November 2018, Cath also competed in the Oman Desert Marathon – and was unfortunately forced to pull out of the event due to heatstroke.

‘By the time they’d got to the end of day three, the front runners had spent around nine hours out in the 50 degrees celsius  sun,’ she recalls.

‘By the end of day three I’d spent 31 hours in the sun. It’s really tough and it’s all about managing your recovery and hydration between legs so you can get up and do it all again the next day.’ 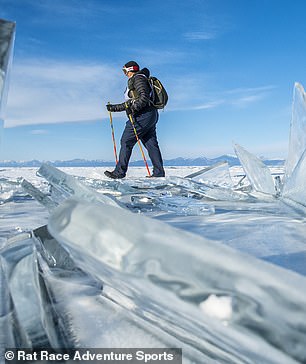 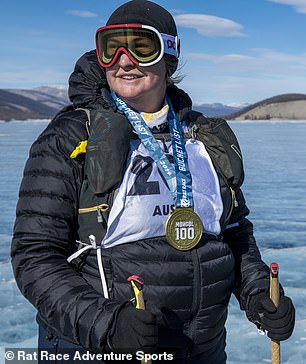 In March this year Cath took part in the Rat Race Adventure Sports Mongol 100, a 100 mile long, four-day mission across a frozen lake in northern Mongolia

During an event, Cath says she consumes a special energy gel every hour, as well as rehydration drinks and water. She also snacks on high-calorie macadamia nuts.

But athletes like Cath burn through around 6,000 calories a day on multi-stage events, with competitors typically losing around 6kg in weight over the course of a competition.

Cath says: ‘When you get to camp at the end of a stage, you try and eat as much as you possibly can, even if you don’t feel like it, knowing that if you don’t you’ll be in trouble further down the line. 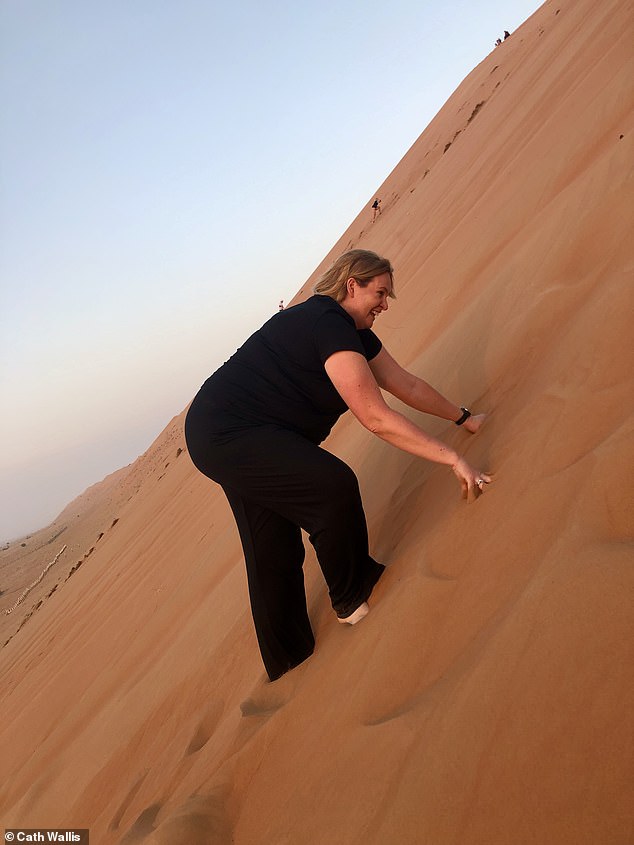 Athletes like Cath burn through around 6,000 calories a day on multi-stage events, with competitors typically losing around 6kg in weight over the course of a competition

‘As a plus-sized athlete, I’m no different to any other competitor in that respect.’

In March this year Cath took part in the Rat Race Adventure Sports Mongol 100, a 100 mile long, four-day mission across a frozen lake in northern Mongolia, in which temperatures plunged to minus -25 degrees celsius.

Cath was the last person to cross that frigid finish line, but describes the experience as ‘magnificent’. 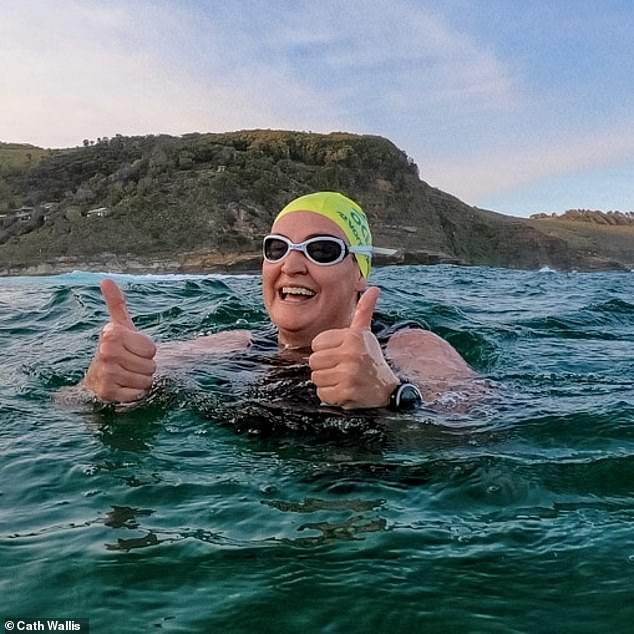 Cath will take on the Hellespont Race (an open water, historic cross-continental swim from Europe to Asia in Turkey) in August this year

In November she’ll head to Africa for the inaugural Rat Race Adventure Sports Race to the Wreck, in which she’ll have to tackle gargantuan sand dunes as she racks-up 15,000 ft of total ascent, in 40 degree heat, on her way west to Namibia’s infamous Skeleton Coast.

Cath, who works with Australian veterans charity Soldier On, says: ‘Stop listening to what society, or other people around, tells you about what you should or shouldn’t be doing.

‘You need to find what your passion is, whatever that might be, and chase your goal. Make a plan, and do it now.’