Trump just enforcing ‘immigration laws that are there’: Border expert

GERVAIS, Ore. (AP) — It was nighttime when Pedro Lucas came home, clutching receipts showing he had paid a funeral home to have the bodies of three immigrant laborers returned to Guatemala from Oregon.

The three, including two of Lucas' cousins, were killed when a pickup truck slammed into a van carrying them and 10 other Guatemalans home from work at a Christmas tree farm. Lucas’ father, who arrived in America just seven months ago and sent part of his earnings to his wife in the village of Chacaj, was also in the van and remains in a coma, his back broken.

The Nov. 29 crash was a blow to Oregon’s immigrant farm workers, the driving force behind the state's $121 million Christmas tree industry, the nation's largest.

On Wednesday, the U.S. House brought some relief when it passed a bill that would loosen restrictions on hiring foreign agricultural workers and create a path to citizenship for more than 1 million farm workers estimated to be in the country illegally.

The bill’s fate in the Senate is unclear, and the White House hasn’t said if President Donald Trump would sign it. But the 260-165 vote was a rare stroke of bipartisanship on immigration. The measure also requires farmers to use E-verify, a system that checks whether someone can legally work, which farmers have fought against in the past.

The administration has expressed support for growers who say they are desperate for immigrants to fill jobs, even though Trump pinned his 2016 campaign and his domestic agenda to building a border wall with Mexico and introduced policies that make it far more difficult for immigrants to win asylum.

“The person who works in an office, he doesn’t know what it’s like to work out there, how much one suffers out there,” Lucas said as he sat at his dining room table, the funeral home documents in front of him. “In this season, here we’re warm inside, but outside, in the morning when it’s cold and there’s ice, you suffer a lot.” 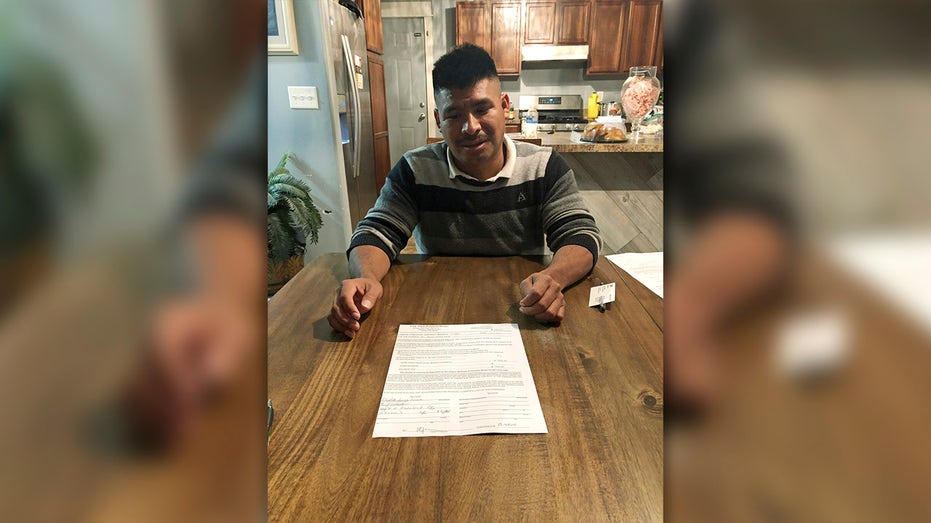 In this Dec. 6, 2019 photo, Pedro Lucas, who is originally from Guatemala, poses for a photo in his home in Gervais, Ore., with a receipt from a funeral home for the costs of a casket and transporting the remains of one of his cousins back to Guatema

The crash shed light on "invisible work” happening in Oregon, said Reyna Lopez, executive director of a farm worker union called PCUN, an acronym in Spanish for Pine Workers and Farmers United of the Northwest.

The labor takes place mostly out of public view, at Christmas tree farms that blanket parts of Oregon’s foothills and the Willamette Valley, an area renowned for its moist climate and fertile soil.

“People don't realize that the majority of this industry is immigrant labor,” said Lopez, whose own father, a Mexican immigrant, was a Christmas tree planter.

The victims of the crash spent their last day loading Christmas trees onto trucks at Holiday Tree Farms, one of the world's largest Christmas tree farms. They received paychecks from a contractor that Friday night in Salem and were headed home when the pickup truck crumpled their van. The Oregon Occupational Safety and Health Division is investigating, though a spokesman declined to provide details. 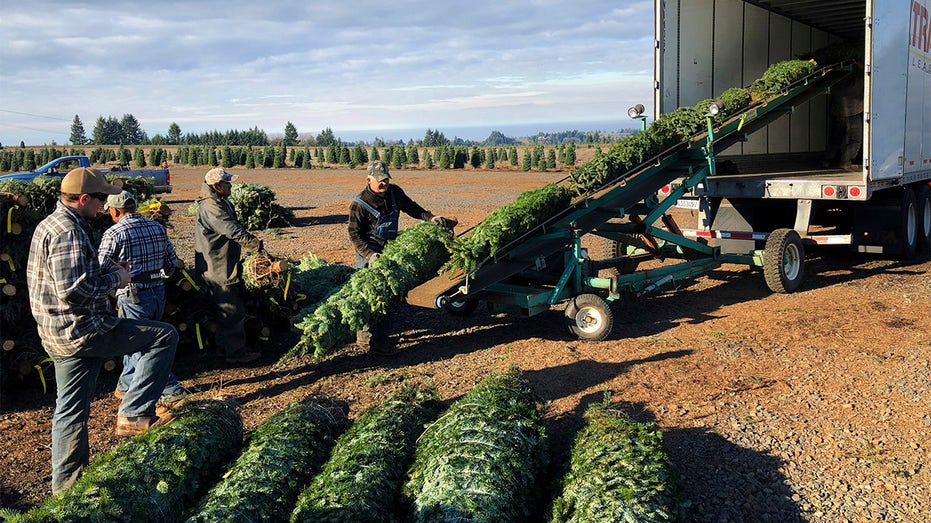 In this Dec. 5, 2019 photo, workers — most of them from Mexico — load Christmas trees onto a truck at Hupp Farms in Silverton, Ore. On Wednesday, Dec. 11, 2019, the U.S. House passed a bill that would loosen restrictions on hiring foreign agricultura

In 2017, 4.7 million Christmas trees were harvested in Oregon, 4 million in North Carolina and 1.5 million in Michigan, the country’s three largest producers, according to the U.S. Department of Agriculture.

Oregon doesn’t compile records on the percentage of immigrants in the Christmas tree industry, but it clearly relies on them. So do North Carolina and Michigan.

As the sun burned through fog one recent morning at Hupp Farms, nestled in the foothills of the Cascade Range near Silverton, Oregon, Jan Hupp surveyed stacks of bound Noble and Nordmann firs about to be loaded onto trucks. They were the last among the 30,000 trees that employees and contractors downed with chain saws during this year’s harvest.

“Without immigrants, we couldn’t have done this,” Hupp, a trucker cap pushed back on his head, his blue jeans stained brown and green from soil and trees, told The Associated Press. “People born here don’t want to do this work.”

His farm has 20 employees, 15 of them from Mexico and the rest U.S.-born. Members of contract crews that helped with the harvest were from Mexico or Central America.

Asked Thursday about passage of the U.S. House bill, Hupp replied: “If it's a pathway to get more people who are willing to work, I'm all for that.”

Harvesting is the hardest part of the job, requiring the cutter to bend over with a heavy chain saw to sever the trunk 1 inch (2.5 centimeters) or less above the ground, said Daniel Garibay, a Hupp Farms employee. He originally is from Zarquillas, a town in Michoacán, Mexico, that he said is plagued by shootouts between rival drug gangs.

If the chain saw touches the ground, the chain is immediately dulled and must be replaced, said the bearded 41-year-old.

Asked what was the biggest number of trees he has felled in one day, Garibay responded matter-of-factly: “One thousand.”

Lucas, sitting in a rented house in Gervais, Oregon, that he and his wife, Raquel, share with his father, his cousins and their sons, described dealing with the aftermath of the van crash. He has relied on donations to pay a funeral home $21,750 to have the bodies of his cousins and a third worker, aged 18, sent home.

“They supported me from Florida, Atlanta, Tennessee, Chicago, and many who work on farms in Oregon. All of Woodburn supported me,” Lucas said, referring to a nearby predominantly Latino town. The Guatemalan Consulate in Seattle said it is prepared to assist.

While arrangements are being made for the bodies to be transported, they are being kept in their caskets an unheated room at City View Funeral Home in Salem.

Standing tall in the lobby, so perfect that it could be mistaken for a fake if not for the piney scent, is a Noble fir Christmas tree.