Tech giants could be held legally responsible for the content published on their platforms after Prime Minister Scott Morrison and his deputy Barnaby Joyce launched extraordinary attacks on social media companies.

Facebook is already under fire globally after an American whistleblower leaked documents accusing the company of knowingly harming users, with Assistant Minister for Mental Health David Coleman declaring “social media platforms can’t be trusted to act in the best interests of children”. 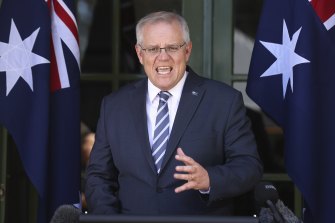 “Social media has become a coward’s palace, where people can just go on there, not say who they are, destroy people’s lives and say the most foul and offensive things to people, and do so with impunity. Now that’s not a free country where that happens,” Mr Morrison said on Thursday.

“That issue, and the technology that enables it, and the lack of accountability that sits around it, is just not on. You can expect us to be leaning even further into this.”

Deputy Premier Barnaby Joyce also called for platforms to be held liable, saying his office had been approached for comment about a “malicious lie” involving his daughter, which had been circulated by anonymous accounts on Twitter and Facebook.

“The platform must be held liable. If they enable the vice, they pay the price,” Mr Joyce said in an opinion piece in The Sydney Morning Herald and The Age.

“The trolls don’t have a voice unless you give them one, and you do. You make money from their noise, their ambit scratchings on the back of a lavatory door. They post their character assassinations from the back of the door at the servo and you illuminate it in on a city billboard for all to see.”

Detailing the substance of the rumour on ABC radio on Thursday morning, Mr Joyce said: “My daughter is a strong person and she had a completely malicious rumour, basically people saying that she had been in relationship with [former NSW Deputy Premier] John Barilaro and that’s why he left, which is just total and utter rubbish.”

Mr Morrison said if social media companies did not deal with anonymous trolls, they faced being held accountable to Australian laws that made publishers legally liable for the editorial content they published to other people.

A Facebook spokesman said the company was engaging with the industry and governments on defamation law reform.

“We support modernisation of Australia’s uniform defamation laws and hope for greater clarity and certainty in this area. Recent court decisions have reaffirmed the need for such law reform, and we’ve taken steps to introduce new controls to support users managing conversations on Facebook,” the company said.

A spokeswoman for Twitter said anonymity is not a shield against violations of its terms of service.

“Twitter will take action against any accounts that are in violation of the Twitter rules. There is no room for abuse and harassment on our platform, and we make ongoing investments in this area to keep our users safe,” the company said in a statement.

Facebook has had a damaging week, as former employee-turned-whistleblower Frances Haugen accused the company of putting “profits before people” and knowingly harming users in testimony to the US Congress, which spurred a bipartisan push to regulate the tech giants. 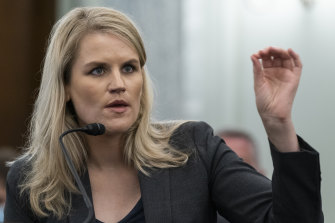 Her testimony, which was heavily rejected by Facebook, was informed by troves of documents she compiled before leaving the company in May. It included research showing Facebook knew its sister site Instagram was intensifying body image and mental health issues among young girls.

Mr Coleman said it was clear that Facebook and other platforms had demonstrated “indifference towards the mental health of children”, saying the whistleblower testimony had created a “real tipping point” for change. He backed regulatory intervention by the government to force Facebook and Instagram, and other platforms, to enforce their own rules preventing children under 13 from setting up accounts.

“We’ve learnt that the social media platforms can’t be trusted to act in the best interests of children,” Mr Coleman said. “Certainly on this issue of enforcing their own rules on age verification, they have been absolutely abysmal. And that needs to change.”

“The social media platforms are able to identify with very sophisticated technology people’s interests, their location, their hobbies, other people who they associate with and so on. These are incredibly sophisticated data analysts and, at the same time they say, we’ve got no idea how old someone is.”

Facebook, which also owns Instagram, said the company had developed multiple ways to identify and remove underage users and had thousands of staff dedicated to reviewing accounts for violating its rules, as well as AI technology to find and remove accounts belonging to underage users.

“Over the past three months, we’ve removed more than 600,000 Instagram accounts that were unable to meet our minimum age requirement,” the spokesman said.

Mr Morrison said Australia had led the world to pass legislation this year to force Facebook and Google to strike content deals with news organisations. The eSafety commissioner, billed by the government as a world-first agency solely concerned with online safety, was also given beefed-up powers this year to crack down on the tech giants when it came to stopping trolling and cyber-abuse.

Under the new laws, which were heavily criticised by the industry for being rushed through the parliament in June, the eSafety commissioner can demand platforms take down serious cyber abuse within 24 hours. The laws will also see new industry codes drafted for the tech giants, as well as other online operators including messaging services, gaming, dating apps, and search engines.

In a ruling last month, the High Court found in the Voller case that media outlets were legally responsible as “publishers” for third parties’ comments on their Facebook pages even if they were not aware of the comments. The decision has implications for all social media users and particularly those who run pages. It has prompted federal attorney general Michaelia Cash to urge state and territories to pursue urgent defamation law reform, telling The Australian the Voller decision presents a “considerable liability” for all publishers.

The nation’s attorneys-general are considering this very issue, having released a discussion paper in March calling for submissions on the question of internet intermediaries’ liability in defamation for the publication of third-party content.

NSW Attorney-General Mark Speakman, who is leading the process, said a working group had meet three times over the past month to discuss the Voller decision and reform options. The meetings included input from defamation academics, media companies and the tech sector.

“Getting the balance right on any reform is crucial to balancing freedom of expression with the right of a person to protect their reputation,” Mr Speakman said.