NSW Labor leadership hopeful Michael Daley says he has secured the 15 signatures he needs to trigger a full membership ballot less than 48 hours from the opening of nominations on Friday.

The former leader on Wednesday said his battle with rival Chris Minns would be tighter than the last time the pair faced off for the top job in 2018, but he was confident he had the numbers to give party branch members their say. 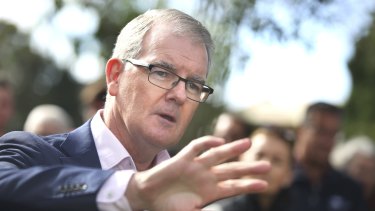 “People want an experienced hand … we need someone, Labor needs someone, NSW needs someone with knowledge and character, grit, tenacity and experience, and I believe that’s me.”

Mr Minns later said he did not yet have the 15 signatures on a piece of paper, but was believed he would surpass the figure when nominations open on Friday.

“All I can do is put myself forward with a positive plan for the future of the state,” he said. He added he did not oppose a ballot, despite the process being “a bit messy”.

“I’ve made it very clear that, that the Labor Party is a democracy. Democracy is a bit messy from time to time, but they’re the rules,” he said.

Five MPs publicly endorsed Mr Minns over Mr Daley on Wednesday in a bid to avoid division in the party and a costly ballot process.

While federal and state MPs have cautioned against a ballot draining an already cash-strapped Labor Party ahead of a federal election within the next 12 months, Mr Daley said the process was nothing to fear.

“It’s just a ballot,” he said. “Asking the branch members in rank-and-file of the Labor Party to pick their leader is just democracy in action.”

Mr Daley held a media conference calling for an upper house inquiry over revelations the state government had attempted to cover up artificial inflation of the state’s budgets by tens of billions of dollars.

It followed a Herald investigation revealing the government had shifted the rail network’s costs onto a corporation that still hasn’t been able to properly operate six years after it was launched.

Mr Daley, who has been raising concerns about the transport corporation in Parliament for years, said the revelations uncovered a “black hole” at the heart of the state government and its budget.

“They’ve taken this fraud and deception through one election, they’re going to try and take it through another one… the economic credentials of this government are in tatters.”

Mr Minns later said he had been talking about the issue of the Transport Asset Holding Entity since state budget estimates in 2016.

On Wednesday afternoon he was visiting a steel manufacturing plate plant in western Sydney to talk about the future of manufacturing in the NSW economy.

A special caucus meeting has been scheduled for Friday, when nominations for the leadership will officially open at 11am. Candidates will have 48 hours to produce at least 15 signatures each from members to nominate.